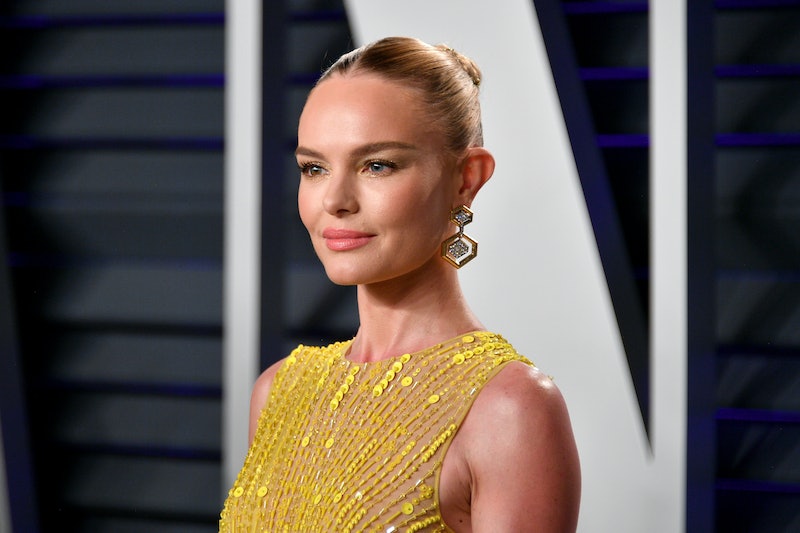 If ever it was Kate Bosworth's dream to be Ariel from The Little Mermaid for a day, then on Weds. night, that dream came true. Her sequined, seafoam gown looked like it could have been stolen from the set of a Disney movie. Yes, it's safe to say Kate Bosworth's dress was everyone's favorite 2019 CMT Awards look.

The model was a rather unexpected addition to the red carpet of Weds.'s country music awards ceremony, but she made it clear ahead of her appearance that she's actually a longtime fan of old-school acts like Dwight Yoakam, Merle Haggard, Buck Owens, and others. To put it simply, the girl knows her stuff.

She must have felt at home, then, when she took the stage at Nashville's Bridgestone Arena to present the Group Video of the Year award to Zac Brown Band. Her sparkly, aqua gown glistened under the stage lights, giving everyone nostalgic mermaid vibes.

Part of Prabal Gurung's Pre-Fall 2019 collection, the gown features a strapless bodice and elegant, asymmetric draping, gathered at the waist with what seems to be a seashell-inspired knot, some might say.

Bosworth accessorized with colossal David Webb jewels, including diamond-drop earrings, a bracelet, and a carved-crystal, white gold and platinum ring.

Her Disney princess aesthetic was the stuff of dreams. While the lookbook model originally sported it with white booties, Bosworth glammed it up with Jimmy Choos. She carried a silver, glittery clutch with it, too. As for her beauty, she opted for a classic half-up hairstyle and a bright coral lip.

After the event, she posted a photo of the look on Instagram, saying "always been a country girl at heart."

Feeling inspired by the model's mermaid moment? Cop the look with her bright, warm-weather hue this summer. The Zoe Report's favorite Bosworth-inspired pieces, ahead.

You couldn't have translated her red carpet dress into a more wearable look any better if you had designed it yourself. This flowy frock makes aqua sequins seem super nonthreatening.

Channel Bosworth's mermaid-inspired look with a casual mini. This aqua knit fit-and-flare dress is the perfect piece to picnic in.

This stunningly sparkly chiffon maxi slip dress is fit for a fairytale. You might not be headed to a red carpet, but you'll surely be the best dressed at the party.