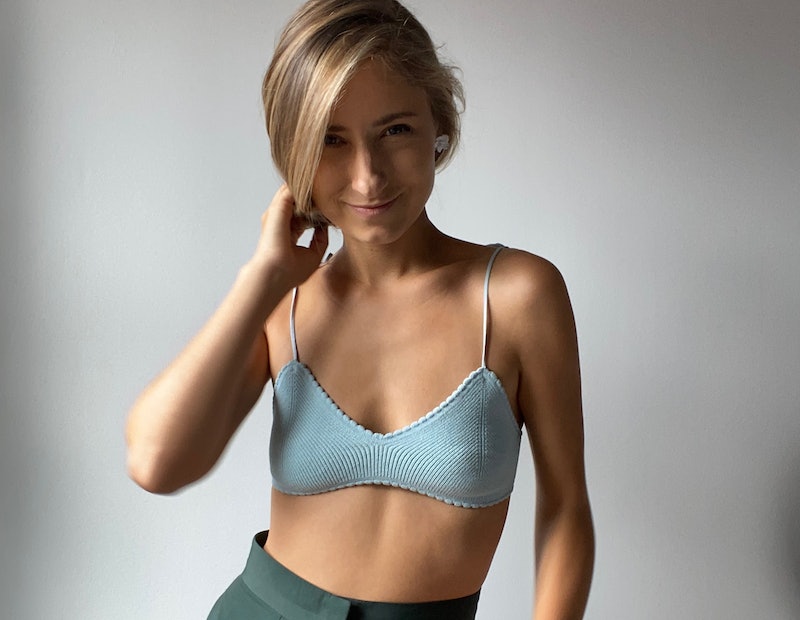 It all started with a vintage jacket. In an extraordinarily rare coincidence, Jenny Walton, seasoned fashion illustrator and designer, and Carolyn Yim, creative director of Ply-Knits, both happened to have the same exact military-issue Navy jacket. "Our jaws dropped," says Yim of the ordeal to TZR. "We both admire the attention to detail and finishing in vintage clothing, and really wish more of today's clothing were as carefully constructed that way." Therein, the duo set out to design a collection that's invigorated with that same vintage essence, jointly landing on one vehicle: the twin set. Jenny Walton x Ply-Knits' first drop is revamping the 20th-century womenswear trend, and it's right in time for 2020's knitwear craze.

There's two pieces involved — the knit bra, which rivals Khaite and Jacquemus' cult-loved silhouettes, and the scalloped cardigan, which features three bow-tying fixtures for a dainty finish. The sets are inspired by the '40s-era 'Sweater Girl' trend, which Audrey Hepburn and Grace Kelly gave rise to through their decadent films. Still, the styles on offer aren't entirely mined from their closets. "[Back then,] tight twin-sets were worn with Perma-Life's bullet bras," says Yim. "They were tight, stiff, strapping, and squeezing, padded with plastics — very uncomfortable!"

While brainstorming, she noticed that knit swimwear of the same time period was far less structured and significantly more comfortable for women. With these in mind, she ultimately reconciled the swim trend with the hyper-feminized daywear silhouettes, making for a modern, yet feminine look. "The Jenny knit bra is [a reminder that] the natural woman in all shapes, humps, and bumps is a beautiful one," Yim says.

In five different colorways, each set can be mixed and matched, worn alone, or worn together for a fall-readied monochrome look. The shades all feature cheeky names — 'forget-me-not-blues', 'watermelon-sugar-n'-spice' — which Yim created as a quiet rebellion against standard colorways. "I like names that are whimsical. The precedence for color naming often comes from natural colors of plants, minerals, and birds (eg. 'cream,' 'eggshell,' 'robin blue') ... Instead, I wanted to go for something fun and rather post-internet."

While the duo helmed the project together, they also called on their family lineage for help. Yim's grandmother, Madam Lee (who famously embroidered Dior couture for John Galliano) showed the two how to bead by hand, and Walton's mother taught them the 'lazy daisy' stitch. Through both generations-old lessons, the set came out to perfection, offering what Yim calls "Alaïa but Tik-Tok."

"The material we chose is incredibly structured and spongey like an Alaïa knit dress. Almost jacket-like. With the strappy ties it is younger" — hence, the Tik Tok — "and more casual to wear," she shares.

To shop the sets, browse ahead — and be sure to keep abreast of their future collaborations. "This isn't going to be the first series we do with Jenny! Keep an eye out for this space. Hint: surrealist trompe l'oeil," shares Yim.