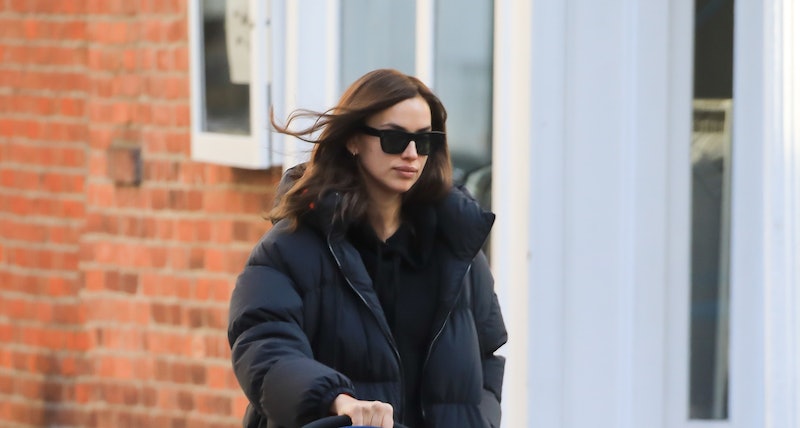 Irina Shayk may be a supermodel, but her winter uniform is still as relatable as it gets. Her outfit of choice? Typically, it's a puffer coat and black combat boots, a simple, warm combination that's ridiculously easy to recreate. That said, the Russian model is far from falling into a style rut — she regularly dons envy-worthy iterations of each go-to piece, ensuring that her staple look feels fresh every single time she steps out. Case in point: Irina Shayk's white combat boots, the latest pair of footwear she debuted on a recent walk in SoHo.

Eagle-eyed fans will immediately recognize the bright pair as another version of the GCDS Gilda high commando boots she's previously worn in the black colorway — Shayk was recently seen in those just last month with (naturally) a cloud-print puffer coat.

And of course, on her latest stroll through New York City, she didn't stray far from her usual: Shayk donned the white shoes with a now-sold-out Burberry coat and a striped Burberry turtleneck (that's currently on sale for $332). The rest of her accessories were also right on par with her usual looks, so naturally, a trendy pair of sunnies (hers were by illesteva) and a small, chic bag completed the ensemble.

The 34-year-old model's cold-weather uniform might fit her style perfectly, but Shayk certainly isn't the only celebrity to adopt a similar look this winter. Stars like Hailey Bieber and Bella Hadid have also been spotted many times in combat boots and puffer coats, proving that Shayk's favorite outfit formula is also (unsurprisingly) right on trend.

There's no better time than the present (aka during the coldest time of the year) to adopt this cozy, utilitarian look for yourself, so keep scrolling — a selection of puffer coats and white combat boots like Shayk's for you to shop are just ahead.