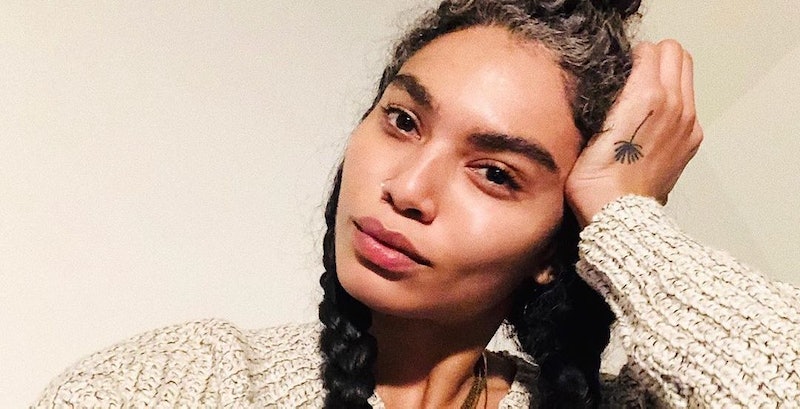 Being a fashion influencer is no longer just about a great outfit. In the midst of the upcoming Presidential election and recent height of the Black Lives Matter movement, those with a platform are using it to speak up. They're amplifying the voices of others, and holding brands accountable — but to some leading the movement, more needs to be done. As influencers pivot their platforms to be resources for education and conversation, it raises important questions: What responsibility do influencers have to elevate social causes and what is the best way to do so?

While there may be no one-size-fits-all answer, many influencers are openly discussing ways to migrate social justice into their feeds, sharing actionable information, giving up space for other voices, and raising money for causes they believe in. Among them is brand consultant and self-love advocate Nicolette Mason.

“I really don't think any of my points of view are controversial in terms of wanting real representation and equal pay for talent regardless of their race, their gender, their body shape and size,” Mason tells TZR. “These aren't radical or controversial points of view. Everyone should be talking about social justice issues and elevating marginalized people.”

Mason’s roots in activism date years back to the very start of her online community. And unlike what GQ has recently noted as the rise of the “wokefluencer” — described by writer Cam Wolf as those who “in an attempt to remain relevant without appearing tone deaf, searches out protests, USPS trucks, or looted stores the way they once chased sunsets — she believes the key to addressing hot topic issues properly is through education and dialogue.

In a social media-first society, the pressure to speak out immediately is counterintuitive to creating long lasting change on a personal level. Rather than feel rushed to share resources or news on the latest tragedy to occur, Mason suggests stepping back to learn: reading books, listening to podcasts, looking to diverse voices, and putting in the intentional effort to be anti-racist, anti-fatphobic, etc.

“There's been this sense of white urgency lately, [where people are saying] ‘Tell me how I can do better,'" says Sophia Roe, chef and welfare advocate who has been using her IGTV to hold in-depth conversation about topics like colorism, checking your privilege, and why anti-racist work is “forever work.” “I need to constantly remind people that this is not my work for you. This is your work for you. I'm here as a courtesy. I don't want anyone to think that it's the job of Black people to do what I'm doing [with my platform], to just tell everybody how to be anti-racist. I think the part of being anti-racist and doing that anti-racist work is pulling your weight, too.”

Mason adds, “We need to drop any ego that we have, because we are all, myself included, works in progress and all of us benefit from learning and evolving. Expecting people to speak to everything can be really harmful and kind of objectifying.”

Roe echoes a similar sentiment, stating, “This is a marathon. I tell white people oftentimes that if you're exhausted, take a break. Because we need you to be doing this forever. You can't be anti-racist for the summer; You got to be anti racist for forever.”

And because of that, much of the work must happen offline and internally.

“The real question I have for influencers who are doing the work is, ‘Are you willing to have these conversations at your dinner table?’” says Tiffany Hardin, founder of the Gild Creative Group, who also manages partnerships at Black Girl In Om. “There’s no way that this whole ‘empathy heals the world’ goal works if we're not willing to have tough conversations at our dinner table with the people that know us the best. Lean into that discomfort and do it often.”

For both Roe and Mason, their very existences are political: As a queer, Jewish, first-generation American, there’s no stripping away Mason’s identities when it comes to creating content. The same is true for Roe who has brought Black culture and her experiences as a Black woman into the food industry. Because of this, their deep-rooted commitments to diversity have made them both go-tos in recent months from those looking to expand their knowledge and outlook. In June, Roe went live on Instagram with model Gigi Hadid, speaking on these issues to over 1.2 million viewers. But while both Mason and Roe have chosen to publicly speak out on these matters, the tokenization of them as sole advocates and spokespeople is a mistake.

“Why am I your person that you go to for anti-racist advice?” Roe asks. “There's probably a reason why. Is it because you like the way I look? Before influencers can effectively become advocates, they must deconstruct their own habits, and that requires a self-reflective questioning process as outlined by Roe. As a thin, light-skinned woman, she’s aware of why many find her more “palatable” when it comes to explaining Black Lives Matter, and that’s moved her to focus on those most abused or overlooked. “In my anti-racist work, I center the most oppressed demographics, which is going to be Black, plus-size, disabled, trans females. If you don't understand who's the most oppressed ... then you also can't have a full globular spectrum of white supremacy.”

Mason has done similar, not only elevating the most marginalized voices on her channels, but communicating her actions to the brands she regularly works with. Both agree that a key first step an influencer can take is prioritizing diversity behind the scenes, asking brands about the diversity of the talent they work with, as well as internal diversity. This can mean being prepared to turn down a job so that someone of another marginalized class can benefit, forgoing a panel or paid partnership while communicating why to the brand.

“Amplifying other people's voices and their work can mean saying no to opportunities in order to make space for other people to have them,” Mason says. Of course, not everyone is in the position to turn down work, and that’s a personal decision for each influencer to make. “A lot of people have to do jobs in any field, not just the influencer world, that don't necessarily align with their views or values, because they have to make a living and that’s part of capitalism, unfortunately.”

But that doesn’t mean you can’t find effective ways to use your influence for the better. Once educated on the social and political topics that matter most to you, incorporating your newfound voice into your feed is and should be an exciting process. You can take a photo wearing voter merch, but there's also space to explain the importance of voting to followers.

“If you can influence people to buy a purse, then you should also be able to find a creative way to influence people to care about Black people,” Roe says. Who says you can't wear a cool frickin’ outfit, and while you're wearing it, talk about white supremacy? — look cool as f*ck and talk about trans rights. What is better content than that? I think it might be the coolest thing in the world to watch someone make a pie and have the voiceover be about trans rights.”

While influencers may have once been concerned that brands may be less likely to work with them if they’re public about their political and social stances, Mason believes the power dynamic is changing. As brands quickly rework their diversity initiatives, influencers have the power to hold potential partners to a higher standard. Brand sponsorships can be a major source of income, but influencers should carefully consider the organization they’re aligning themselves with to ensure their morals and beliefs do not contradict one another.

In terms of the future of the influencer industry, both Mason and Roe see activism being increasingly common among influencers — through everything from their shopping habits, to their social channels, and their less visible work offline. Gone are the days where aesthetic was the prime focus; say hello to the era of conversation.

“Listen, I’m a chef, so I love a beautiful flatlay, I love talking about salsa tacos, and making peach pie,” Roe says. “But don't tell me that you can't find a way right next to that post or in your Instagram Story to talk about how you feel about an issue.”