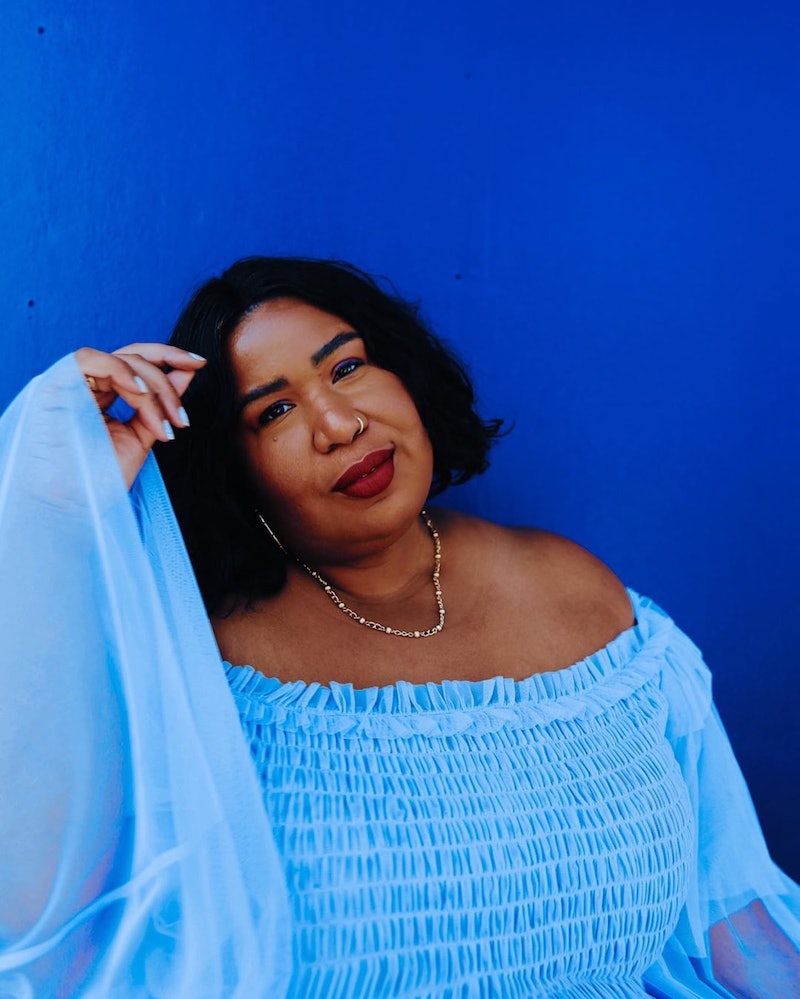 One result of the recent Black Lives Matter protests is that many brands in the fashion industry are publicly and privately addressing the fact that they’ve systematically ignored and oppressed issues raised by Black employees. As brands rework their diversity initiatives, many fashion insiders are waiting to see who will follow through on their promises and who will be deemed performative. In addition to using diverse models, and addressing internal structures, the disparity in influencer pay and collaborations is an issue that’s also worthy of attention.

Among the Black women pushing to hold brands accountable is Kellie Brown, a popular style creator and consultant who is publicly addressing the enormous disparity when it comes to influencer collaborations. “The opportunities that do come are generally given to white, or white passing, or biracial influencers,” Brown tells TZR. “Very few product collaborations have ever existed with dark-skinned Black women or people of color, and opportunities like that are something that really do help you establish yourself, and might be the leapfrog or stepping stone opportunity that is, unfortunately, generally reserved for white and white-passing people.”

As the power of influencers continues to spread amidst the ever-changing fashion landscape, brands are continuously finding success in product collaborations than ever before. Revolve (who declined to comment for this piece) has done so with their in-house influencer lines. Danielle Bernstein reportedly made Macy’s $2.5 million in sales on the first day with their collab collection. And Bloomingdale's, Anthropologie, We Wore What, Away, and countless others have also found success in doing so. Yet time and time again, these partnerships do not include influencers who are Black, POC, plus-size, and/or queer, continuously centering white, straight-size voices in these major deals.

Brown explains that she’s dreamed of a product collaboration for years now. But, when addressing the topic — even with brands she’s done numerous sponsored posts for — she’s been met with the same response: “We’re not doing anything right now,” or “Let’s revisit it in the future.” To this day, that time has never come.

Knowing the immense buying power her engaged following has — both within the plus-size and straight-size markets — Brown took to the power of social media in early July to show StitchFix — a size-inclusive brand she’s worked with numerous times — that her audience is ready to spend their money on a product collaboration between the two. With nearly 250 comments now on the post, her point was quickly made. “It demonstrated just how wide Black and plus-size womens’ audiences can be,” she says. “I thought of StitchFix because I’ve always felt fairly compensated by them, I like that it’s also a service oriented situation where we can really help women discover their style, and there were a lot of reasons that I thought it made sense for us to do a product collaboration together.”

For brands who, unlike StitchFix, are not size-inclusive, Brown views product collaborations as the perfect missed opportunity to expand into that market. “Generally influencer collabs are not an entire collection, they're usually a few pieces," she explains. "That’s the [perfect opportunity to collaborate with a] plus influencer specifically to help you expand your size ranges. It’s a great proof of concept, and you have a built-in marketing tool in your influencer.”

Brown isn’t alone on this: This disparity in product collaborations has impacted countless Black, POC, plus-size and queer influencers, including Alysse Dalessandro of Ready to Stare. “Thin, white, straight women in the fashion space do have the highest numbers and engagement, so if you're going to go based on that then, yeah, you’re going to book them,” Dalessandro says, “but numbers are not everything. Alignment is truly the most important thing. Because, if a collaboration is really aligned with the person's audience, the engagement will be great no matter what.”

And not alignment in terms of physical appearance, but rather regarding fashion aesthetic, lifestyle, beliefs, and morals.

Brown adds, “We are sort of double marginalized, triple if you're queer. You’re already being told you're unattractive because you're larger and that there’s only one way to be fat and attractive as far as the industry is concerned. And then if thin Black women aren't even being given a chance, certainly plus Black women are not.”

Dalessandro — who is both plus-size and queer — has often felt tokenized by brands, approached to collaborate solely during Pride Month. Brown has dealt with similar, pointing to a trend within the industry to capitalize off marginalized voices only when it’s beneficial for the brand, and not year round. “I'm not the only plus-size queer influencer, and where was this brand the whole year other than June? Because I'm here all year long,” Dalessandro adds.

Nicolette Mason, a size-inclusive activist and brand consultant, echoes that point, adding that Black, plus-size, and queer influencers should not be pigeonholed by brands into only being able to talk about their marginalized identities, having their inclusion reduced to checking a box for a one-off occasion.

“Kellie Brown is such a great example,” Mason says, “because she moves the needle in so many ways. Her travel content is so amazing, so why not a collaboration on luggage? Or makeup and beauty? Things that aren't limited just to size and body shape, because it feels like another personal form of tokenization when the only thing plus-size talent is tapped into is for plus size fashion.”

Popular YouTuber Nabela Noor is a prime example, recently expanding her body positive fashion brand Zeba into a nail polish collection with Olive & June that furthered her message of self-love. “Inspired by our Zeba Standard of sizing, we chose uplifting shade names that describe our community to add the perfect amount of positivity to those extra precious and NEEDED self-care moments,” Noor wrote in the collaboration announcement.

But, with so many prominent influencers overlooked or denied opportunities for collaborations, where is the communication missing? If companies lack diversity among those doing the decision making, it can mean that ideas can be homogeneous or come from the same viewpoint.

“No matter how much people market or sell the idea that they're inclusive, when [brands only work with the same thin, white influencers], it shows me that the internal framework of the company — whether it's a brand or a magazine or any other associations — is not actually that diverse,” Mason explains. “And it does tend to be informed by their own perspectives of what the world looks like, and by their own immediate relationships and connections.”

That’s not to say some brands haven’t been putting in the work to produce more inclusive product collaborations. Rochelle Johnson — who is plus-size and Black — collaborated with Lane Bryant on a summer collection and influencer Color Me Courtney unveiled her new collection with Rent the Runway back in June.

Nordstrom, who has become well-known for its exclusive collaboration deals with popular influencers, told TZR that it's currently examining ways to amplify diversity in its product collabs after failing to do so in the past.

“We need to improve here, and we're looking into opportunities to partner with diverse influencers on future Nordstrom Made exclusive collections,” stated Meliz Andiroglu, Brand PR Manager for Nordstrom, via email. “Our commitment to diversity and our zero-tolerance policy for discrimination of any kind extends to the partners we work with. We work hard to partner with influencers and bloggers who have similar values to us when it comes to important topics like racism and discrimination … While our goal is to work with a diverse mix of influencers, we need to improve and are making it a priority to develop a plan for the next year that will help get us there.”

Influencer Arielle Charnas had a Something Navy collection with Nordstrom until 2019 when she re-launched on her own. In the past, the brand also saw success in its collaboration lines with Caroline Issa and Olivia Palermo. Fashionista even referred to Nordstrom as a “preeminent example of how a legacy department store can innovate without alienating its customers or compromising its legacy” back in 2018. While the brand’s transparency on their downfalls is certainly admirable, their moves going forward will tell all.

When faced with these types of situations, Mason’s found it best to vet the brand on its diversity initiatives before moving forward on a collaboration, analyzing the opportunity to decide whether another influencer may be a better fit.

“It’s important to ask and vet brands to make sure that they are hiring diversely," says Mason. "If they're not, I'm going to say, 'Instead of me, I think that you should hire XYZ,' and be pretty concrete in leveraging that relationship and the opportunity to amplify other creators, particularly Black creators, people with disabilities, people who are trans or gender non-conforming, who tend to get looked over in those capacities.”

A responsibility also falls on the audience and allies to help uplift these marginalized voices in front of brands as well. Change is impossible unless there’s a community behind it leading the charge, and this situation is no different. Brown explains that when a brand posts Black influencers to their feed, they’re more likely to get less likes than white influencers because “people keep scrolling if they don’t see themselves.” So an easy way to help: Stop, like, and comment. Engage with Black, plus-size, and queer creatives, not just on their personal feeds but also on brand pages. Be vocal about who you want to see a brand work with, and don’t underestimate the power of a direct message.

“We’ve seen the direct effect when people who are not the victimized or not the people subject to this kind of stuff, raise their voices,” Brown says. “There's an instant change. If you believe in someone, you need to use your voice to advocate for us.”