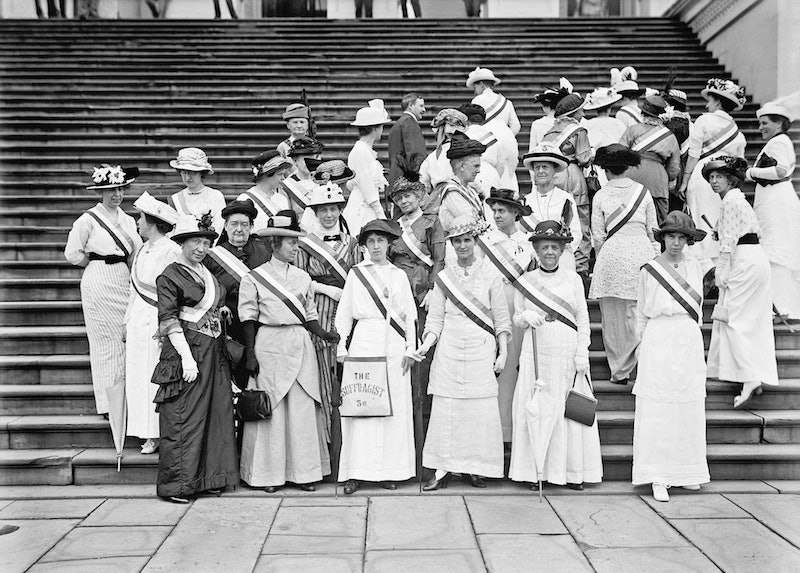 Fashion has always been used as an object of activism and stood for codes that go far beyond aesthetics. Just take Michelle Obama’s V-O-T-E necklace worn for her speech at the 2020 Democratic National Convention. Clothing isn't always just clothing; fashion and activism are intertwined. But with the rise of social media, consumers are asking brands for accountability as to what goes on behind the scenes. As brands engage in modern social and political movements (like Balenciaga's editorial for Spring/Summer 2020 mimicking election coverage), consumers are finding ways not just to send a message with their clothes, but also with their spending power.

The women’s movement was one of the most important time periods in which fashion stood as a political statement. “Fashion was and is always political because it is a material way to express power,” says fashion historian Einav Rabinovitch-Fox, Ph.D. She adds that this has been especially true for women, noting that in her field of expertise, it dates back to the 1850s. "Women's rights advocates took the issue of dress reform and the bloomer more specifically as part of their agenda to promote women's rights and equality. This placed a strong connection between fashion and appearance, and politics. For a long time, long after the bloomer was abandoned, the bloomer continued to be associated with feminism and the feminist struggle.” Still, early on these conversations often left out women of color or other marginalized identities of the time.

In continuation of that legacy, the suffragettes of the early 20th century were recognized for their dress codes. The color white is well known as a hue that signifies the movement, but colors were also worn to signify various beliefs. “The suffragettes wore white as part of a trinity of colors: white for purity, purple for dignity and loyalty, and green for hope,” explains Kara McLeod, fashion historian and professor at FIDM. “The color scheme was first proposed in 1908 in the British publication Votes for Women, by one of the co-editors Emmeline Pethick-Lawrence. Other publications promoted this, essentially, branding of the women's suffrage movement. Women also used the colors on ribbons, hat bands, sashes, scarves, or even jewelry to show support for the cause without having an entire outfit. In the U.S., the green was replaced with golden yellow.”

This same subtle use of suffragette white is still used today. “In 2017, the House Democratic Women’s Working Group asked women members to wear white to a presidential address as a group gesture signifying support for women's rights," adds McLeod. "They did it again in 2019 at the State of the Union address, and prominent female politicians have worn white symbolically on several other occasions. Rep. Alexandria Ocasio-Cortez wore white at her swearing in, for example, and Hillary Clinton wore a white pantsuit to the final presidential debate of the 2016 election." Rep. Lois Frankel said in February 2019, "Wearing suffragette white is a respectful message of solidarity with women across the country, and a declaration that we will not go back on our hard-earned right."

“Other aspects of the women's movement had different fashions; the infamous bra burnings in the 1970s and the tug-of-war over pants through much of the 20th century are some examples,” McLeod explains, expanding on her own upbringing in which she was encouraged to wear skirts and dresses. “I graduated in 1985, quite a bit after Katherine Hepburn scandalously wore slacks everywhere and a 1966 column in Women's Wear Daily detailed several restaurants in NYC that would not seat women wearing pantsuits, even designer ones."

And the rise of jeans, both for women and men, wasn't just about a more relaxed or casual wardrobe. Denim was a tool used by student activists not only as an equalizer but as a symbol of the Black struggle for freedom. “Denim served not only as a rebellious uniform to the culture of the middle-class activists, but also as a soul tie to the Black laborers,” Miko Underwood, sustainable denim designer, historian, and founder of Oak & Acorn told TZR earlier this year in a story on the history of Black activism and denim. But, over time, jeans were co-opted and entered the mainstream as a trend worn by all. Whether it was pants, denim, or the bra, choosing to wear or not wear one of these items (as well as many others) holds a great significance and has been coded in politics at one time in history or another.

One of the most powerful examples of political fashion is the Black Panthers, which Beyoncé paid tribute to during her Superbowl performance in 2016. Founded in 1966 by Bobby Seale and Huey Newton, the group’s motivation was to fight against the recurring police brutality and racism in the United States. The uniform was unmistakable: all black, typically with a leather jacket, dark sunglasses (to be protected and unidentified), and a black beret, which was a counter to the green beret worn by the military. Like the white outfits of the suffragettes, a unified, symbolic look helped the Black Panther Party to differentiate themselves and to project a higher message through their dress of choice.

“Oftentimes, political fashions come from the streets and from activists themselves, later on being adopted by designers,” explains Rabinovitch-Fox. “This is true to the counterculture fashion of the 1960s and the unisex styles that began as a protest-wear and then were co-opted by designers like Saint Laurent and others. Punk is also a good example of fashion that began in the streets and was co-opted by haute couture. Designers usually react to social movements of protest and activism; they don't start one.”

Though activists' use of fashion is often distinctly anti-capitalist and anti-establishment, fashion brands have still tried to find ways to tie their design ethos into larger social movements. Today, in the midst of of social and political upheaval and peaceful protests, mainstream brands are now trying to get on board with the cause. Whether it’s about the environment, the #MeToo movement, or feminism, labels as foundational as Chanel and Dior have focused their lenses on the political. In 2017, Missoni featured pussyhats in its show, referencing the Women's March in Washington D.C., and Dior's Maria Grazia Chiuri has politicized her runways, first featuring T-shirts with the phrase "We Should All Be Feminists" after becoming the first woman to lead Dior. "Many of these historic brands did not touch on feminism and activism in the past, so even the fact that they’ve just started, making slogan T-shirts is important in the scheme of fashion history," adds Rabinovitch-Fox. As brands come under fire for racist designs or lack of internal diversity, committing to a cause may also help the long-run bottom line. And though brands may be use it as a marketing tool, but in turn, it is also a way to make important causes even more visible.

“We're not OK with putting our clients in a position in which they work with a company that, unbeknownst to them, is now coming into the public space with some sort of controversy or bad behavior,” Vanessa Flaherty, partner and executive vice president of influencer talent agency Digital Brand Architects, told Business of Fashion in a Sep. 1 article about brand morals and influencer contracts. “The reason that has become much more of a hot-button issue right now is because brands and companies are being called out for their bad behavior on a much larger scale. Since the [Black Lives Matter] movement and Pay Up movement are now coming to light through social media, it's even more imperative.”

It’s also worth noting that there’s a whole generation of new designers who have used their platforms to address larger political and social issues. These brands have built their brands on authentic activism instead of jumping in later. Kerby Jean-Raymond of Pyer Moss has worked with Black artists, turned to Black history for inspiration, and even chosen to execute his runway shows in places like Weeksville Heritage Center and The King's Theater in Brooklyn. Designer Vivienne Westwood has made political activism central to her label since she first launched during the '70s, recently touching on topics like the environment and WikiLeaks.

Today, political activism can be achieved in other ways, too. The idea of buying from small, independent designers can be an active way for consumers to use their spending power to send a larger message. There’s a reason why Telfar's shopping bag has become even more of an iconic, in-demand piece in our current climate; it's a style "not for you, for everyone." Designer Telfar Clemens recently told Hypebeast,"We are not 'inclusive' — we are Black-owned and nongendered since 2004. We went from marginalized to tokenized quick. Our move was to build our entire company within our community ... and to one day be totally independent of the industry."

Thanks to social media and the breadth of knowledge available on the internet, shopping ethically and sustainably is easier for a customer who knows where to look and which questions to ask. Consumers hold spending power, but with a direct line to brands through Instagram or Twitter, movements like the 15 Percent Pledge can move brands to act more quickly in addressing issues from lack of internal diversity to the ethics of their supply chains. While what your clothing represents has long held weight, today activism is multifaceted. And beyond how a dress looks or what a pair of jeans represent, the ethos of the brands behind them is all the more important.