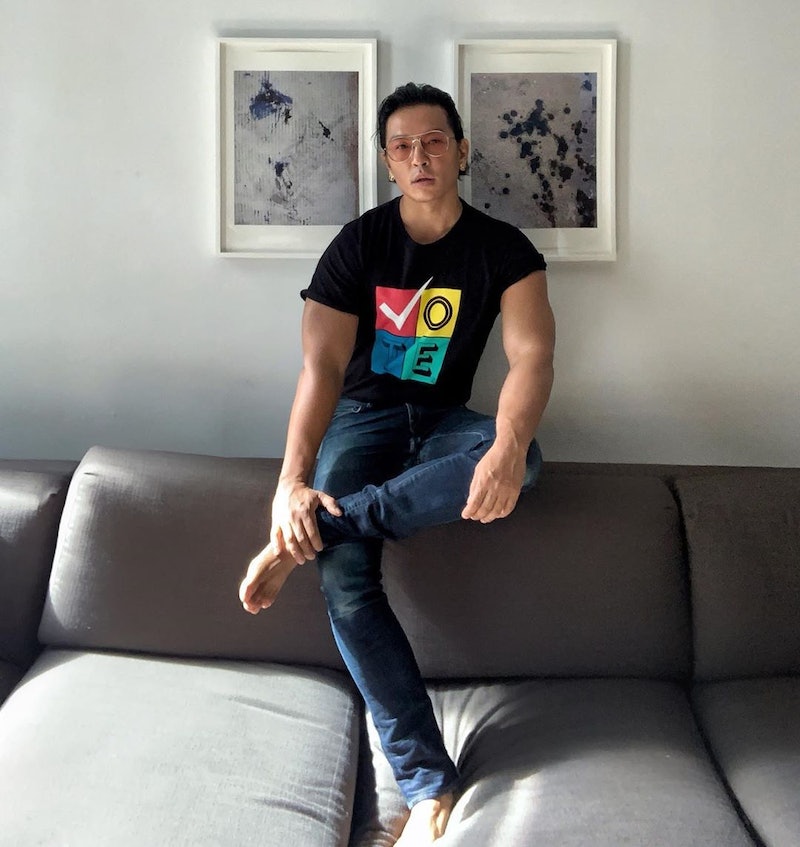 Merch is meant to convey a message. Without speaking a word, your clothing signals a connection to like-minded communities whose common interest can be anything from Taylor Swift, to Taco Bell, to the L.A. Lakers. In the months leading up to the November election, vote merch has surged, with key fashion players getting involved. In addition to the typical candidate-focused designs, a straightforward call to vote can be found across $40 T-shirts and $400 earrings alike. But brands aren’t merely creating products for customers already planning to show up at the polls (or vote early, or mail in their ballot) — although these designs will certainly appeal to them. Merch, and the brands who make it, are aiming to create waves of positive impact to increase voter participation.

“We’re basically voting’s greatest publicist,” Sunny Jenkins tells TZR. Publicity is, in fact, Jenkins' day job but she’s speaking on behalf of I Am A Voter, a non-partisan, non-profit organization that works to increase voter participation and engagement. Jenkins is a founding member and works voluntarily alongside the company’s other female founders to solve the U.S.'s voting gap. Only 56% of voting-age adults cast a ballot in the 2016 election, according to Pew Research. In 2018’s midterm elections, voter turnout surpassed 50% for the first time since 1982, which marks a positive increase, but still means that only half of the possible voting population are participating. Private citizens, non-profits, and commercial businesses alike are striving to find a solution to get out the vote. Merch is part of that equation.

This movement grows on the '90s-born Rock The Vote initiative, which tapped major recording artists (Madonna, Lenny Kravitz, and Pharrell included) to encourage youth voter participation and launched the first online voter registration resource. Current-day merch takes a similar, yet updated, approach, bringing celebrities and major designers to the cause. Thanks to the rise of social media, a surge in connectivity and visibility among younger generations means that something as simple as a "Vote" T-shirt can spur conversations about civic duty among peers, but also reaches a larger audience when engaging on Instagram or Tik Tok.

“When we got together regionally after the 2016 election, we really were very clear that what we wanted to do ... was look at why [voters age 18 to 30] care more about sneakers or mascara than they do about voting,” Jenkins says. If young shoppers will stand outside Supreme, Kith, or Glossier on the morning of a new product drop, Jenkins is working to create the same level of investment that keep voters in lines wrapped around polling stations on Election Day.

I Am A Voter is a women-lead organization comprised of individuals from marketing, communication, and PR backgrounds. Building strong brand connections is their expertise and this has lead to them securing a huge list of like-minded partners across lifestyle and fashion who feel equally compelled to increase voter participation. This election year, brands such as Tory Burch, Stuart Weitzman, and Mother are selling merch specifically to be donated to support I Am A Voter’s mission. “This is a culture-focused, strategic approach,” says Jenkins. The percentage of donated proceeds are funneled directly back into I Am A Voter’s programming, while the partnership with a notable name brand, “leverages the community that brand brings to the channel.”

Fellow non-profit When We All Vote operates similarly. Founded by former First Lady Michelle Obama (as well as a handful of A-List stars including Tom Hanks and Janelle Monae) in 2018, "When We All Vote is on a mission to change the culture around voting,” says Crystal Carson, VP of Culture and Communications, “and to change the culture, you have to be in the culture. That means meeting people where they are — whether that's online, through content or fashion. People are making their voices heard, from protest to the polls, and merch plays a role in that."

This year, When We All Vote launched a collection of merch with a curated list of brands and products, including the By Chari “Vote” necklace Obama wore in her Democratic National Convention speech. The collection, coordinated by stylist Meredith Koop, When We All Vote’s Creative Advisor of Merchandise, comes with QR codes to connect consumers directly to the voting resources they need digitally. As in-person events are simply not viable in 2020, bringing this information directly to potential voters seems more important than ever.

Brands are just as excited as their non-profit partners to put their energy, resources, and time into creating voter merch, too. “We feel strongly that right now is not the time to be neutral,” says Meredith Melling, co-founder of La Ligne. At the beginning of September, the brand launched a collection of voter merch in collaboration with poet Cleo Wade, including face masks and tees whose proceeds benefit the fight against voter suppression via Fair Fight.

La Ligne’s capsule comes four years after the brand’s “Je suis avec elle” (“I’m with her”) merch sold out ahead of the last election. “For 2020 and the Cleo Wade collaboration, we definitely were prepared to invest more and increase the amount of inventory we offered,” Melling says. Even after an additional restock last week, the masks and T-shirts have officially sold out. “We’re rushing tees and masks so voters have in time to wear and get the message out and get to the polls safely.”

For brands like La Ligne who are driven to stand for something beyond the clothing it sells, voter merch is a means to make the greatest financial impact possible. “The donation we’re able to make from the success of this capsule is really an incredible driving force for us,” Melling explains. “It’s a donation we wouldn’t be able to make on our own, as individuals. But through our brand we’re able to make a much bigger impact. I also think people, customers, are wanting to advertise their socio-political point of view and so wearing that kind of messaging on your person ... is an extension of putting it on your Instagram feed and Facebook feed.”

But, producing merch for customers is not the sole way fashion brands are making an impact ahead of November 3; they're also getting involved on an internal level. La Ligne and Old Navy are offering paid leave for any employee who sign up to be a poll worker. Patagonia is closing all its doors on Election Day so that employees can volunteer, as well. COS is partnering with the American Civil Liberties Union (ACLU) to offer voting rights education to its employees and will cut hours of operation on Election Day so they can vote while getting paid. Nordstrom will provide discounted Lyft rides for its workers to get to the polls. During New York Fashion Week, Tanya Taylor posted a two-minute video promoting voter registration in lieu of a digital Spring/Summer 2021 presentation.

It's not novel for fashion brands to voice their political and social stances — most recently evident in support of Black Lives Matter and addressing the systemic racism that exists within the industry itself — consumers now look to brands that acknowledge and reflect their set of values. They're shopping based on which corporate priorities reflect their personal one. "The consumer not only has the desire but the expectation for brands to align with them on a cultural level and support the same social issues that they support," Jenkins explains. This can be explicit as a shirt that says "I am a voter" or as subtle and thoughtful as a brand that practices what they preach when it comes to customers and employees alike.

Ahead, shop some of the best pieces of voter merch that directly help increased voter participation, fight suppression, and spread information every American needs to know. That is, of course, after you've registered to vote yourself.

50% of proceeds from sales on MayaBrenner.com will go to a number of organizations including Color of Change, Girls Inc. of Los Angeles and I Am A Voter.

When We All Vote x Brother Vellies
Canvassing Sneakers
$95

100% of the sales of the sneakers will be donated to When We All Vote.

100% of proceeds will go toward I Am A Voter. Only 100 pairs of the boots will be available.

In collaboration with Gloria Steinem, $50,000 of sales will be donated to women-of-color-led grassroots organizations including Black Voters Matter, Voto Latino, and March On.

$30 from each necklace sale will be donated to I Am A Voter.

$35 from each bag sale will be donated to the ACLU.

70% of each purchase will be donated to When We All Vote and I Am A Voter.

Prabal Gurung
When We All Vote T-Shirt
$115

15% of each sale will be donated to When We All Vote.

20% of sales will be donated to When We All Vote.

This top was made in partnership with FKSP, a black-owned business. 100% of proceeds will be donated to the NAACP Legal Defense and Educational Fund (LDF).

The QR code on the bag links to a voter registration page on Vote.gov and a percentage of proceeds will be donated to I Am A Voter

$5 from every pair of socks sold on MotherDenim.com will be donated to I Am A Voter through December 31, 2020.