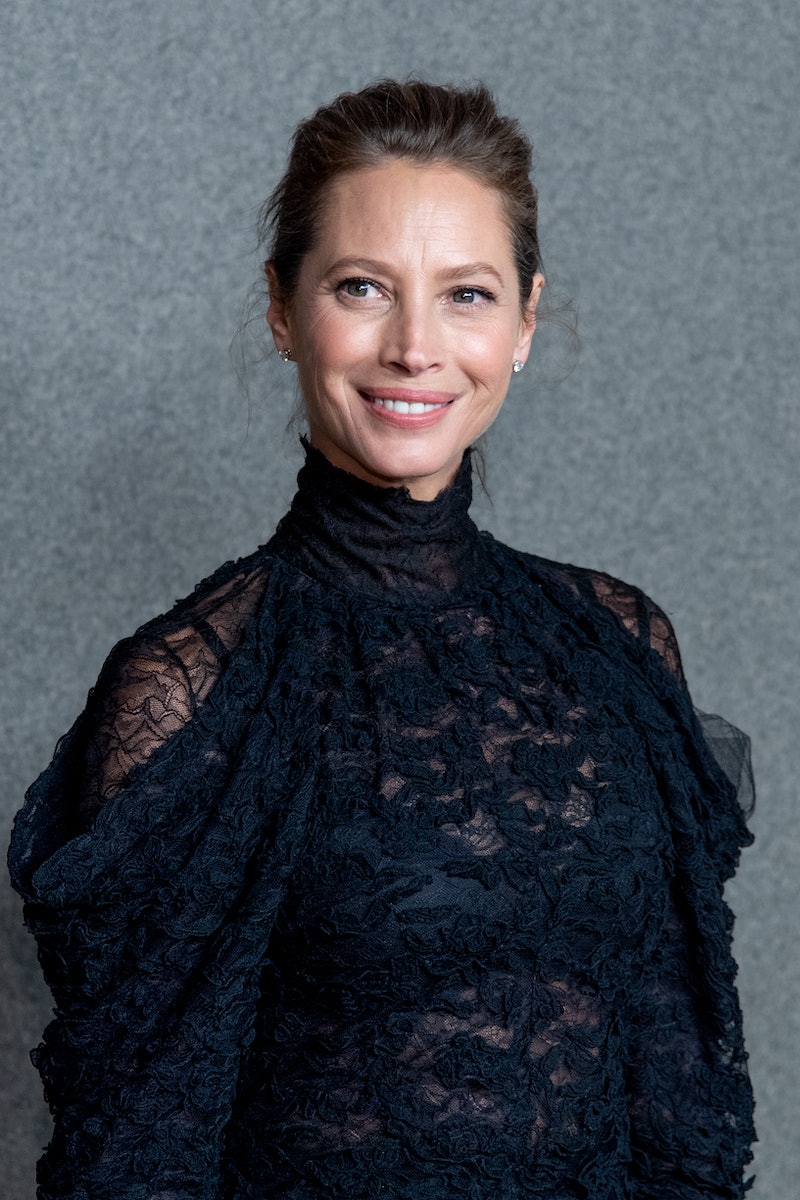 As one of The Big Six, you'd think that Christy Turlington Burns would miss all of the glitz, glam, hustle, and bustle of pre-pandemic life. But the former model and mother of two, who is isolating in New York City, is enjoying the quiet. "We're in the city at the moment, so I'm in the room I typically practice yoga in," she tells me over our Zoom call. "My routine lately has been coming up here, practicing yoga, and then staying for most of the day. It's sort of weird to work in the space I practice yoga, but it's also really nice." Between focusing on her wellness and keeping busy with family at home, to working towards making pregnancy safe for all women with her Every Mother Counts non-profit, Turlington Burns is also the new face of Calvin Klein's latest ETERNITY fragrance campaign.

Turlington Burns has a long relationship with the American design house, dating back to her first Calvin Klein runway show in 1987. "I would say aesthetically, I feel very aligned," she tells me about their ongoing partnership. "I've been working for the brand for many, many years, and I feel like I've learned a lot about what I like aesthetically through the exposure of this brand and company. I think sort of the classic, minimalist aesthetic that I prefer is quite aligned, and I would say we are very much on the same page." She starred in the brand's first ETERNITY campaign back in 1988. A few decades later in 2014, she was the face once again, but this time around with her husband, Edward Burns, alongside her. Most recently in 2020, Turlington Burns is in the newest ETERNITY fragrance campaign, again hand-and-hand with her husband on the beach — a quarantine daydream.

ETERNITY Eau Fresh For Her is also reminiscent of the good ol' days when we could be outdoors without abandon. The notes of pear, black currant, peony, patchouli, and amber feel so fresh. "I think it's a very soothing scent for me," she says about the fragrance. "I think it's also very romantic and floral. Peony is my favorite flower, and it's one of the main scents, so for me its conjures up good memories, warmth, and love."

Ahead, read on about Turlington Burns' philanthropy work, wellness and fitness routines, and quarantining with her husband.

Though she doesn't really think of it as a platform per se, Turlington Burns is using her knowledge and power for good. "I feel like there's a lot of need and a lot of social justice issues that impact so many of us," she says. "Yet, there is inequity in society and so a lot of people kind of fall through the cracks, and I just find that not acceptable." With her commitment to maternal health, she founded Every Mother Counts in 2010. The foundation's goal is to help make pregnancy and childbirth safe for everyone. "The more that we speak out about things that are important to us and that impact the lives of others, the better it is for everyone."

Health and fitness are integral parts of Turlington Burns' life. She has a pretty steady yoga practice and enjoys running, which have kept her grounded during the pandemic. "I would say I've probably been a little more consistent with those practices during COVID. They were a bit of an anchor for me," she says. "Normally, I would probably do those things first thing in the morning and then go on with my day. But during the pandemic, I found times in the day that were unusual times, times where I just felt like I needed to get out to run, or I needed to have a practice of some sort to just kind of center myself."

Food-wise, Turlington Burns' daughter turned her on to Daily Harvest during quarantine. "I love smoothies and things like that and so we started ordering those early days of quarantine and now I'm kind of addicted to them. There's lot of variety, they’re healthy, and they taste good."

Christy Turlington Burns On Her Marriage

Not much has changed about her marriage while quarantining with her husband — if anything, she think it's made them closer. "I can't imagine not having had a partner through this time. Supporting our kids while they're home schooled among other struggles are super challenging for everyone, but I can't imagine doing that on my own."