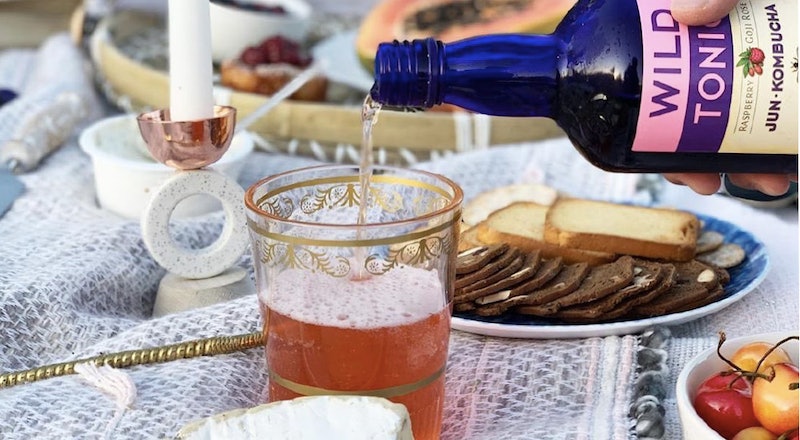 It seems like, of late, many people are trying to find the middle ground between being overly indulgent and heath-obsessed. In other words, finding a balanced and mindful approach to wellness is becoming a more common goal than say, trying to have a perfectly "clean" diet and lifestyle. That said, if you're someone who enjoys the occasional adult beverage, you may not necessarily need to cut them out — even if you're trying to be a bit more conscious. And considering the latest wave of healthy cocktails on the market right now, you probably have more options than ever to mindfully imbibe.

Low sugar or low carb alcoholic beverages are nothing new, but lately brands are getting more inventive than ever to offer drinks that also offer high quality ingredients, and even a few buzzy wellness ones. But even with that promise, are they actually healthy? Or is it all just hype? Nutritional experts are weighing in on the trends — which includes a spiked versions of a super-popular probiotic concoction and the simple cocktail in a can that proved ubiquitous at this summer's parties. To find out which got the thumbs-up and which might deserve some further inspection, see ahead.

From White Claw to Bon & Viv, spiked seltzer has recently become the go-to for those trying to avoid excess sugar. "Outside of being in a can, which can leech aluminum into your drink, this is about as innocuous as a cocktail gets," says Ariane Resnick, certified nutritionist, chef, and author of The Thinking Girl's Guide To Drinking (as well as the soon-to-be-released How To Be Well When You're Not). She notes that while these drinks typically feature little to no added sugar (think, boozy LaCroix) it's not always clear what alcohol you're actually drinking — something to look out for if you're trying to steer clear of certain ingredients.

And Jamie Hickey, personal trainer and nutritionist with Truism Fitness, adds that while most people mistakenly assume these canned concoctions use vodka, you'll typically find malted rice is what gives them their buzz — which also means they have a lower alcohol by volume. "The sugars added to the seltzer are fermented to produce alcohol in the same way sugars in barley are fermented to make beer," she explains. "One good thing comes from the drinks not containing wheat or barley — this is a non-gluten drink. In a 12-ounce drink you’ll find two grams of carbs and two grams of sugar. This stacks up nicely to other cocktails and drinks on the market, making it easy to enjoy a drink or two and not feel guilty."

Tea lovers in the mood for a cocktail don't have to settle for the ironically tea-less Long Island Iced Tea these days: drinks like LQD Creative Liquid's hard-brewed teas have actual tea, as well as other natural ingredients added, which means it might have some legitimate benefits. "The catechins in green tea are useful to mitigate the oxidative effect of [alcohol]," says Resnick of this beverage's antioxidant value.

And while Hickey notes that the malted beverage category is inundated with some unsavory options for health-conscious folks, this one could be a worthy contender. "LQD [ferments] the yeast and barley just like you would normal beer, then they add the decaffeinated green tea extract with cane sugar," she explains. "At the end of the process you are left with a product that only used five or six ingredients, which makes it a lot easier for health-conscience people to know and control what they're putting in their bodies."

Ever chug coconut water to replenish the day after you've had a few too many? LQD has also created a canned cocktail that could help you hydrate while you imbibe, based on that same principle. "Coconut water is good to counteract the loss of electrolytes from drinking," says Resnick. The drink is also formulated without gluten, using naturally fermented coconut water, and has a 4.2 percent ABV, which is about the same as a can of beer.

Regular kombuchas already boast a low level of alcohol by nature — around 0.5 to two percent. But brands like Wild Tonic have made boozier versions with around five to six percent — comparable to a beer. "The popularity of this drink stems from the fact that if you’re going to drink an alcoholic beverage why not pair it with probiotics, organic acids, enzymes, vitamins, and minerals?" Says Hickey, who also notes that, while there are inherent sugars in these drinks, this is a substantially better option if you're looking to switch from something a lot more sugary, like a rum and coke.

And according to Resnick, the drink might offer you some balance, due to its gut health-boosting properties. "Since alcohol depletes probiotics (it can kill good gut bacteria), consuming alcohol that’s full of probiotics can be beneficial to counteract that," she says. "While it may not lead to a true enhancement of your good gut flora, it may make for less of a loss of it."