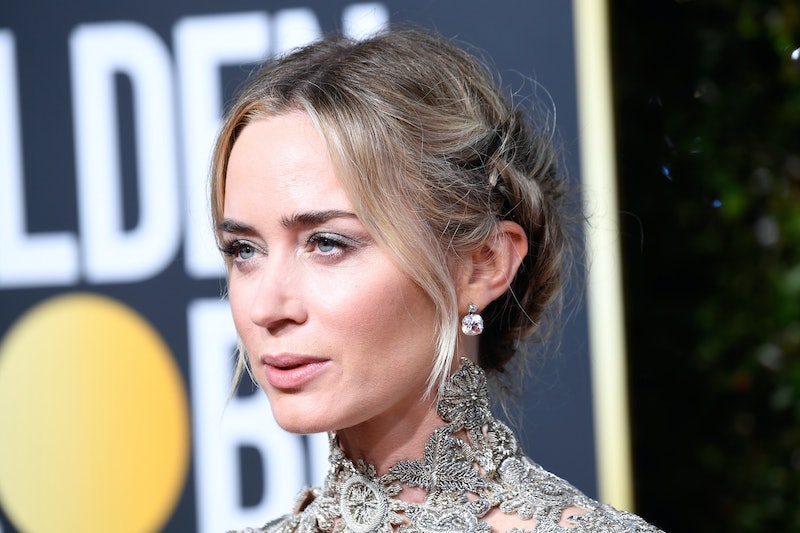 When you think of couples wearing matching outfits on the red carpet, your memory might wander immediately to Britney Spears and Justin Timberlake's historic denim moment during the 2001 American Music Awards. It's true: coordinative outfits aren't always stylish. But before you cast them off completely, wait until you see Emily Blunt and John Krasinski's matching suits.

Blunt and Krasinski are one of the sweetest duos in Hollywood (didn't you see the way he teared up during her SAG Awards speech?) and perhaps the only couple who can pull off near-identical ensembles on the red carpet. During Sun. night's 71st Annual Writers Guild Awards in New York City, they both turned up wearing bowtie-clad tuxedos.

While Krasinski went with the traditional set — a black velvet jacket over a white shirt and a subtle bowtie — Blunt, of course, looked more couture. The Mary Poppins Returns actor's satiny blazer featured sharp shoulders and a floral jacquard design.

She wore it over a basic white button-up and with black straight-legged trousers like her husband's, but it was the massive, ruffled bowtie that really set Blunt's apart. Leave it to this ever-stylish mom of two to turn a classic suit into a runway-ready moment.

Blunt's tux is by Dolce & Gabbana. She paired it with an enormous statement ring by Jacob and Co., buckled Jimmy Choo heels, and a Tyler Ellis clutch.

Couples coordinating on the red carpet is no new concept. Kim Kardashian and Kanye West and the Beckhams have both showed up to events in matching ensembles in the past. This time, though, nobody can deny the downright cuteness of Blunt and Krasinski's his and hers suits.

It couldn't come at a better time, either, because women's suits are all over the market right now. Already this awards season, Miley Cyrus and Judy Greer have opted for menswear-inspired tuxedo looks.

Take your tux look to the next level with this trend-forward double-breasted boxy blazer.

Pair your blazer with its corresponding trousers for the full look. These pleated, wide-leg pants are a sophisticated-yet-playful choice.

This is your traditional suit blazer, with menswear-inspired notched lapels, flap pockets, and a sleek structured fit.

So similar to Blunt's, these trousers are slightly cropped, giving you a no-frills straight-leg fit.

This layer is extra long with three rows of buttons, slanted welt pockets, and peak lapels.

Made of cozy wool, these wide-leg, cropped pants are the perfect addition to your winter wardrobe.

The belt detail on this tuxedo-style jacket will give you a more structured fit.

Opt for these matching leggings: simple with a subtle ankle slit to keep things interesting.