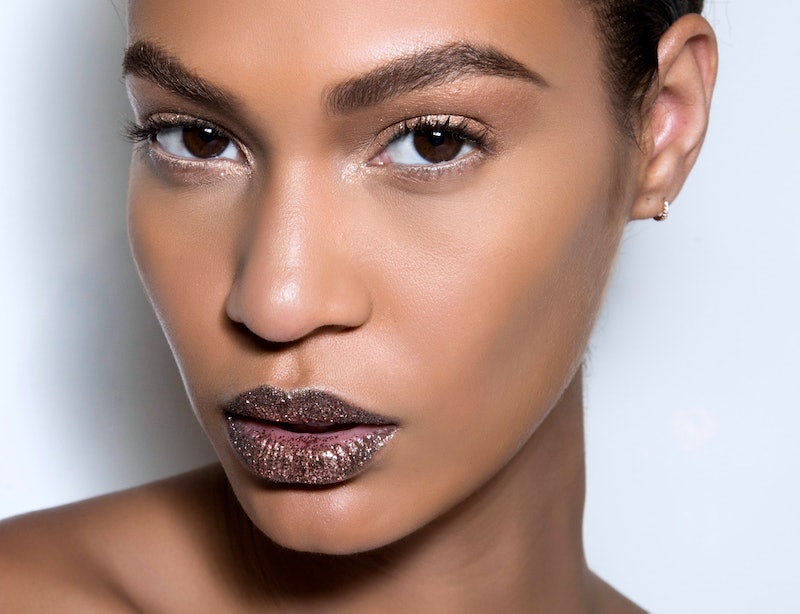 In the ‘90s and early aughts, most women waxed and plucked their bushy brows into oblivion, convinced that thinner was better. Today, it's the opposite: eyebrow-enhancing makeup, semi-permanent microblading treatments, and hair growth serums all help in the worldwide quest for bigger, bolder arches à la Cara Delevingne and Lily Collins. But brow regrowth serums are the one product that the jury is still out on.

Technically, there are no hair growth enhancers that have been specifically proven to regrow brows — but there are general hair growth products that have been shown to work, which you could potentially repurpose for use on your brows if you're feeling adventurous. “The only ingredient proven effective for general hair growth is minoxidil,” Perry Romanowski, a cosmetic chemist and founder of The Beauty Brains, tells The Zoe Report. You may recognize minoxidil as the active ingredient in Rogaine, the preventative hair loss line for men. Some brave vloggers have even tried applying Rogaine to their eyebrows with a Q-tip and love the results — but it goes without saying that this isn’t a method that’s been tested and approved by the company.

As for prescription-strength Latisse, Romanowski confirms that the popular serum does work on eyelashes because of the active ingredient, bimatoprost. He notes that applying the product to your brows is an off-label use that’s not necessarily recommended, but that hasn’t stopped those in search of amazing arches from trying — and many say Latisse can work wonders for balding brows.

That’s because bimatoprost is part of the prostaglandin family, a group of lipid compounds that interact with cells to enhance their natural function. When prostaglandins like bimatoprost and isopropyl cloprostenate (the active ingredient in Rodan + Fields’ Lash Boost) come into contact with the lash line or brow bone, they incite the growth of new hair. But as with any ingredient that has profound effects, there are some risks involved.

“If you are using it on your eyelashes, there is a chance that your eyes can permanently change color,” Romanowski says. Seriously — prostaglandins have been shown to turn light eyes brown, as the Latisse site warns. And CBS reports that Rodin + Fields was sued earlier this year for failing to disclose the side effects of Lash Boost’s active ingredients, “including change(s) in iris color, eyelid drooping, itchy eyes, eye [and] lid discoloration, thinning and loss of eyelashes [and] loss of eyelash hair, eye sensitivity, eye infections, and vision impairment,” according to the lawsuit. It’s worth noting that prostaglandins are banned in Canada — so proceed with caution, especially when using them in an unconventional way.

“No other ingredients have been proven safe and effective for brow growth,” Romanowski tells us. And that’s where a whole lot of anecdotal evidence comes in. Despite the fact that many of the brow growth serums on the market don’t include ingredients that have been shown to encourage growth, products like Grande Cosmetics GrandeBROW and RevitaLash RevitaBrow Advanced Eyebrow Conditioner consistently earn five-star reviews from users who swear they work. So what’s the deal?

“Many of these products contain peptides, vitamins, and oils to help strengthen and condition brow hairs,” Ron Robinson, a cosmetic chemist and founder of BeautyStat.com, tells The Zoe Report. While these ingredients won’t make new hair grow, they may prevent existing hair from falling out — which gives the appearance of thicker, fuller brows. Some key ingredients to look for in a good brow strengthening formula are peptides (to promote healthy hair follicles), amino acids (the building blocks of protein — what hair is made of), vitamins like biotin and panthenol (to strengthen hair), and hyaluronic acid (to soften and condition).

“If you’re going to use a brow serum, I would recommend GrandeBROW,” Robin Evans, a New York City-based brow expert who's worked with Emily Ratajkowski, tells The Zoe Report. “But you have to keep using these products to keep the results.” As soon as you discontinue use of a brow conditioner or lash growth serum, your brows or lashes will return to their normal state.

Evans also recommends plain old castor oil as a natural remedy. “Apply it topically to the skin under the brow with a Q-tip,” she says. “The results will not be as immediate as with a brow growth serum and will be a little more subtle, but it’s a more natural solution.” This checks out, according to cosmetic chemist Robinson. “Castor oil may work to condition and strengthen the hair,” he tells us.

Whatever you choose to apply to your arches — off-label lash serums, peptide-rich brow conditioners, or natural oils — you can enhance their effects by exfoliating first. “Before application, use a spoolie brush to firmly brush the brows back-and-forth and get rid of any flakiness or build up,” Evans suggests. “That way, the products you are using will penetrate better.”

Ahead, the top-rated brow conditioners to try for the softest, strongest brows imaginable.

"They all pretty much work the same and have the same active ingredients," Evans says. "But GrandeBrow works as well as its competitors, and at only $70 (compared to about $150 a pop) you get more bang for your buck."

Made with the brand's proprietary Phyto-Medic Complex — a naturally-derived substance that mimics bimatoprost — LASHFOOD's Eyebrow Enhancer is said to do more than just strengthen brows. It apparently encourages new growth, as well. In a study done by the brand, no participants experienced irritation while using this bimatoprost alternative.

A beauty editor favorite, RevitaBrow's formulation includes peptides and biotin to strengthen brow hairs and give the appearance of fuller, thicker brows.

Use this on your lashes *or* brows — if the four-star reviews are to be believed, both will look noticeably healthier within eight weeks.

Avon's lash and brow formula relies on peptides and botanical oils to create the look of luscious brows. In the brand's clinical trial, 84 percent of women said their lashes look fuller after eight weeks (which you only can assume goes for brows, as well).

Besides having the cutest name, BROWVO! works double duty to give you the best brows ever: It acts as a primer to prep brows for other products, or works on its own to condition hairs with keratin and soy proteins.

Brush into brows morning and night to get the best results from neuLASH's peptide, amino acid, and keratin-filled formula. It also includes sweet almond proteins to protect the delicate hair follicles on the brow bone.

This formula has all the hair strengthening must-haves — peptides, amino acids, keratin, biotin, *and* panthenol — so you can expect healthier looking brows in 60 days.

"To get more long term results I recommend my clients use castor oil," Evans says. "I use this one from Live Fraiche."

"I also highly recommend taking a hair vitamin," Evans tells TZR. "This is the way to go." The brow expert likes the Amplifeye Lash, Brow & Hair Formula from Xtreme Lashes, which features essential fatty acids, vitamin E, and antioxidants to promote healthy hair from the inside out.