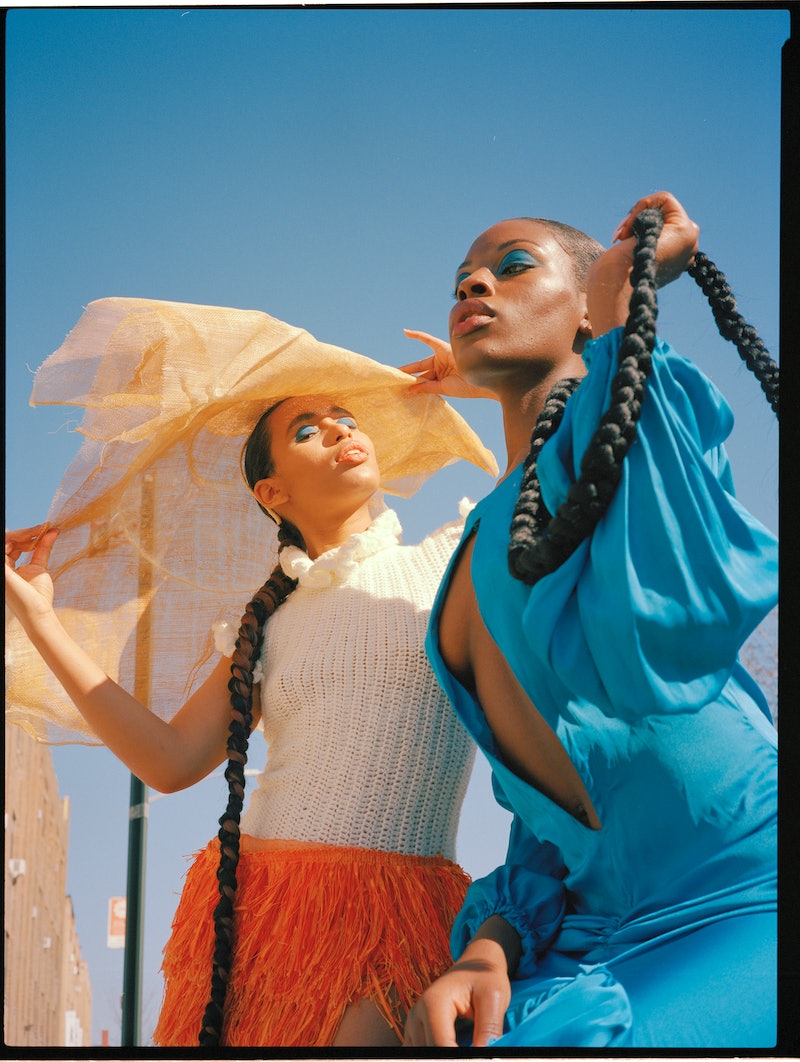 After class, you expect college students to grab a coffee with friends or stop by the library, but back in 2016 Tia Adeola returned to her dorm room to fulfill orders for her designs over social media. "Snapchat was more popular than Instagram at the time, and I would try my cross-back tops on myself and my roommates, and then post them on Snapchat," the designer Teni or "Tia" Adeola tells TZR. As followers began to ask about her original cross-back design, she ramped up production, selling them for $50 each, calling her label Slashed By Tia. But, what may have started as a dorm-room enterprise has blossomed into a fashion brand with a progressive perspective and runway real estate in New York.

Adeola's designs began as a quest to fulfill a personal struggle: the freshman college student couldn't find night-out looks to fit her body the way she wanted. She created the now signature top to fit her E-Cup chest, while also allowing her to go completely backless. The two strings that were crossed on the top is where the original 'slashed' moniker came from. "That was my initial source of inspiration until I began to go back to my art history renaissance roots, which has been my source of inspiration until now and evolved the vision." In November 2016, she debuted her first ruffle style, and the requests began to pour in.

Upon graduating The New School in spring 2019, Adeola debuted her first runway show after rebranding at NYFW in February 2020, changing the label's name to her own. As she explores the trajectory of her brand, Adeola is going beyond the simple draw of a social media aesthetic and diving into deeper themes, "I would describe it [the brand's aesthetic] as reclaiming the Renaissance and historical art narratives to include Black people with a modern day twist," Adeola explains.

Before her first offical NYFW runway show in 2020, Adeola gained attention for colorful ruffled sets with dramatic sleeves and voluminous bodies. In 2018, when SZA wore a pink ruffle skort set on stage during her Coachella performance. And other celebs have been spotted in pieces from the 24 year old designer, like Gigi Hadid in her tangerine off-the-shoulder sheer top. Adeola has continued to experiment with ruffles through her newer collections, delving deeper into the historical relevance of the ornament.

"Ruffles were used as a representation of status in society," she explains. "The bigger the ruff, the more important you were." For instance, she says a queen would have a huge ruff attached to the collar of her gowns that almost covered her face. The inspiration behind Adeola's Fall/Winter 2020 line was the Renaissance period, and she used both ruffles and sheer detailing to anchor her work. By casting Black women in her show, Adeola challenged the historical depictions of the style, promoting a more diverse embodiment. "Of course in all the paintings I came across while studying art history, you would never catch a Black person wearing a ruff as they were never depicted as royalty."

"The see-through material for me was a challenge I gave myself," Adeola explains. "How do I take the idea of women wearing see-through clothes as being tacky or promiscuous, and make it into wearable art that is instead admired." The marriage of both modern and classic elements — looks were styled with both heels and sneakers — creates the tension and poetry of Adeola's work. "When you’re wearing these pieces, you’ll be the boldest girl in the room with all eyes on you, and for good reasons," she emphasizes.

Adeola adds that her excitement around fashion began early during her childhood in Nigeria, though she wasn't able to express it. "One could describe Nigeria as a conservative country that’s still working on embracing more progressive ideas, and I think my generation, generation Z, as well as millennials are pushing this growth." It wasn't until she left her home country that she was able experience the creative, boundary-pushing side of fashion. "Before I went to London for high school, I knew clothes was what I loved but I wasn’t able to use them as a form of expression because there were just certain ways I wasn’t allowed to be dressed."

Originally Adeola was intending on pursuing a college degree in the UK, but she wasn't happy with her major and didn't want to spend another three years working toward something she wasn't passionate about. The designer decided to secretly apply to The New School with the help of a high school teacher, and ended up getting a part scholarship. "So my family had not choice but to let me make the move," Adeola says.

When she arrived in New York City, she was surrounded by over-the-top style that she never experienced before. "People in full looks in the middle of the day, extravagant wigs, six-inch platforms strutting down Union Square, and no one turned around and stared. New York gave me the freedom and influence I longed for to really dive into true, free design."

Now, after graduating, Adeola is centering her line around not only the clothing, but the culture of her brand. "As I grow, I plan to hire Black people as the decision makers for my brand. I plan to keep my casting in both runways and campaigns inclusive. I want younger girls that look like me to see me and know that they can do it too." At a time when some of the industry's biggest stakeholders are being called out for their lack of diversity, Adeola's perspective is one that suggests a future that creates space for everyone to see themselves represented. With the founding of Aurora James' 15 Percent Pledge, and CFDA announced a new inclusivity initiative that includes an in-house employment program to hire Black talent in all areas of the industry, a mentorship and internship program for Black students and graduates, the next generation of Black designers will find space to thrive and emerging brands like Adeola's will receive the spotlight they deserve.

Currently Tia Adeola's website is being built, so make sure to check it out when it launches. But for now, shop her delicate embellished veils and ultra-chic ruffled masks.