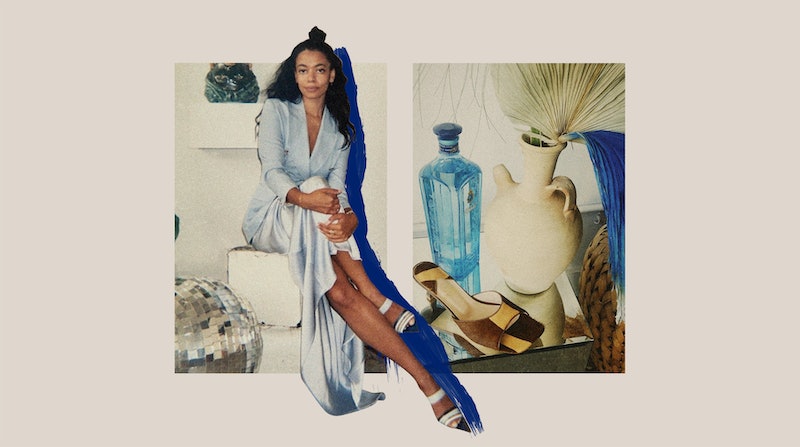 To a Black woman fresh out of college hoping to break into the fashion industry, few people were as inspiring to me as Aurora James. So you can imagine my excitement when I landed my first post-grad gig as an intern for her brand Brother Vellies in 2016. Having won the CFDA Vogue Fashion Fund in 2015, the founder was quickly expanding the business well beyond its popular feathered slides. Now almost four years later, I'm catching up with her not only about BV, but also a new proposal: Aurora James' 15 Percent Pledge is an initiative that maps out how major retailers can help support Black-owned brands in the long term. But much like everything else with the designer, the journey to get there was not what one would expect.

"I had the idea of the 15 Percent Pledge last week", James tells TZR via email. "As a business owner, and during this pandemic, I am especially torn up by how much Black businesses are suffering. This is an opportunity for those retailers to put $14.5 billion back into Black communities." (According to a recent article by GQ, this staggering number comes from taking 15 percent of the product budgets of four major retailers first called on by James: Target, Sephora, Shopbop, and Whole Foods.) James goes on to explain that as someone who is passionate about creating financial equality, this pledge is the one thing that she could do to "move the needle".

With the goal of leveling the playing feel for fellow Black businesses, James proposes equal representation as a place to start. Here's the ask: the BV-founder is encouraging major retailers (like, Target, Sephora, and Whole Foods) to commit to buying 15 percent of their inventory from Black business. If the number seems random to you, it's not, Black people make up about 15 percent of the United States and, by James' standards, should be represented as such in the stores that customers — of all races — shop. "Black people spend trillions of dollars in this country every year, but yet represent an insignificant fraction of how these companies allocate [their] purchasing power," the designer states. "Many Black people choose to spend money with these businesses, their stores are set up in our communities, and their sponsored posts are targeted to us. If they value our money, then value us as well and show us that we are represented. Take the pledge".

While this seems like a no-brainer, the impact this will have long-term isn't lost on the Toronto-native. In fact, it's the very reason she says it's more important now, than ever. Because of the pandemic, 40 percent of Black-owned businesses were forced to shut down, due to lack of resources. And a commitment from major retailers to invest in their products is designed to help relieve some of the pressure brands face in the midst of uncertainty, while also ensuring they're being given the same opportunity for survival as more affluent white labels.

Partnering with larger stakeholders in the fashion industry is something James has navigated since she founded her footwear and accessories label Brother Vellies in 2013. James began working with local artisans in Morocco and exploring ethically sourced materials with the goal of introducing the Western market to traditional African footwear, starting with the desert-boot Velskoen design, also known as, Vellies (hence the name). The brand has since expanded while continuing to create and sustain jobs for women in countries all over Africa, including Kenya, Ethiopia, Morocco, and Mexico.

Today, the brand has found a permanent home in a lush boutique at the edge of Brooklyn's Greenpoint neighborhood. In the shop you can find an assortment of Black art hanging on the walls, a tropical assortment of plants, and furniture from local vintage haunts (like, Dobbin St. Co-Op), all of which create a calming oasis on a busy street. Even then, it's nearly impossible to overlook the selection of beautifully made shoes stocked on the shelves. But, the brand also has longstanding partnerships with larger retailers like Moda Operandi, Net-A-Porter, and Saks Fifth Avenue at a time when the industry's retail models are shifting in ways that can threaten small businesses.

Like many other brand owners, James had to rethink the way she did business in the wake of COVID-19, which led to the label's newly launched program, "Something Special". This initiative is a monthly subscription of small-batch items that Aurora hopes "will bring some comfort and beauty into our lives during this time". This model has allowed the designer to connect with her Instagram followers and fans of the brand who shop comfy socks, handmade mugs, and more through a dedicated newsletter.

To ensure mutual survival for other Black-owned businesses, James is calling larger retailers to rethink their current standings. "First they need to take stock of where they are and complete an audit of their business", she says. "Then they need to accept where they are at, own it, and figure out how they got there. Last, they need to commit ... commit to achieving a minimum of 15 percent, set a deadline to achieve this, and put a system in play where they can be held accountable."

However the designer understands that any significant change doesn't happen overnight. "It could take a few years, but we are here to help lay out that plan and strategy. And we have some of the most brilliant Black minds on board to help make it happen." In the meantime, she encourages everyone to sign the pledge and spread awareness. James is focusing on social media outreach and awareness to help spread the message and by urging followers to sign a petition created by the organization calling on brands to commit. While it is up to each institution how they will implement the pledge, the goal is to leverage both social and purchasing power to open larger institutions up to conversation.

With retail on the brink of a revolution, it is a time when instead of going back to the way things were, leaders like the Brother Vellies's founder are offering a future that is even better. But, it requires work to change systems and hold those who refuse accountable. If you're looking to support the cause, visit 15percentpledge.org for more information or visit the link here to sign the petition. You an also text “PLEDGE" to 917-540-8148 and of course, follow @15percentpledge on Instagram.