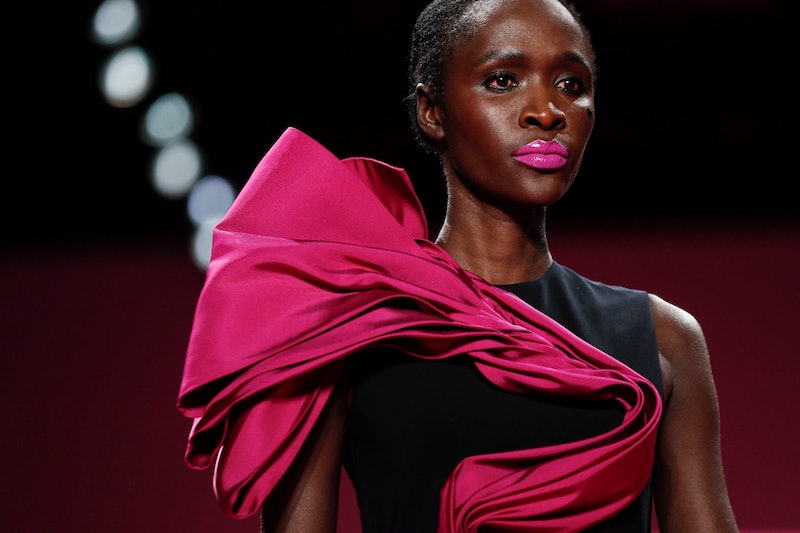 Talk about starting things off on the right foot. At Christian Siriano's Fall/Winter 2020 show in New York City on Feb. 6, the look was fun, funky, and bright — which typically isn't the vibe for fall shows. Inspired by the new movie Birds of Prey, models were sent down the runway with bright lips, sleek ponytails, and harlequin hearts dotted on their cheeks.

"[Siriano] specifically asked for this Harley Quinn heart on the cheek," Erin Parsons, lead makeup artist for Maybelline, tells TZR, referring to the DC comic character currently played on film by Margot Robbie. To make sure the shape was uniform on all of the models, artists used art store stencils, and filled them in with Maybelline's Hyper Easy Liquid Liner. The lips were a mix of the brand's SuperStay Matte Ink Liquid Lipstick in Create and Romance. "We're putting on clear gloss over the color just before they go out," Parsons says, referring to Maybelline's Lifter Gloss in Ice, which will launch in this summer.

While the heart and lips read whimsical, the eye makeup added a dollop of grunge. Parsons says that Siriano wanted a strong black line around the eye, which was sketched on with Maybelline's Tattoo Studio Pencil. "We blend it on a bare eyelid, which gives the illusion of shadow," she says. This smudgy look was topped off by coating the top and bottom lashes in Maybelline's Falsies Lash Lift Mascara. "It's the easiest five-minute eye," Parsons says. "We want it to not be perfect."

With the hair, however, things were decidedly more detailed. Lead hairstylist for TRESemmé Justine Marjan opted for ear-height ponytails that were neatly slicked back. To achieve the look, she blew the hair dry and super straight, and then worked TRESemmé's Tres Two Extra Hold Gel into her hands to pull the hair back. Marjan then misted the roots with the brand's TRESemmé Compressed Micro Mist 4: Extend Hair Spray "to get a really silky, smooth, sleek finish," she says.

Once the hair was tied up, the hairstylist popped in a Hidden Crown clip-in ponytail which she'd accented with blue and pink streaks. "We wanted the front to be clean to show off the makeup, but then get a pop of color in the back," Marjan says.

Where there wasn't color, however, was on the nails. Essie lead artist Julie Kandalec opted for an "edgy and elegant" nail art look that was inspired by some of the necklaces in the collection. Leather-like black nails were outfitted with a crescent of glitter in the center. "We wanted it to be jewel-like," Kandalec says.

To get the desired result, she painted on two coats of Essie Nail Polish in Licorice before applying the crescent glitter. Kandalec dotted on the glitter — Essie Nail Polish in Set in Stones — with the polish brush, making this one of the easier nail art looks to replicate at home. Here's the trick: "I always have a paper towel handy, because in any glitter polish, there's going to be a lot of clear polish," she says. "So I blot the brush on the paper towel to absorb some of the extra clear substance so that there's more glitter on the brush. Then I just dot it on."

Bright lips, non-fussy eye makeup, and a nail art look you could do in the comfort of your own home? Christian Siriano's show just set the bar pretty high for Fashion Month.