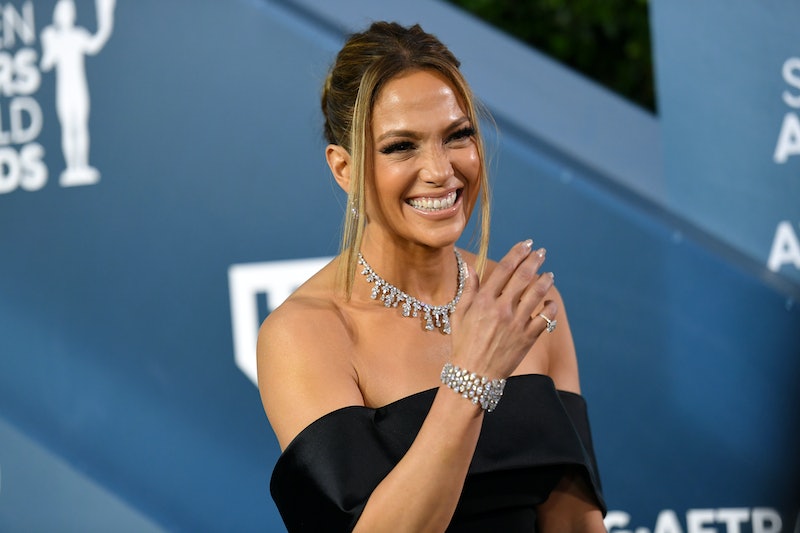 As the new year starts to settle in, so are the 2020 celebrity nail trends. While 2019 was filled with avant-garde and maximalism, stars are bringing in the new decade with a more subdued approach. That's not to say glitz and glam has lost its place among celeb manicures, but monotone designs and softer shades have been seen more frequently than not — at least, so far.

January, now coming to a near-close, treated everyone well: There were ample opportunities for celebrities to showcase their nails (thank you, awards season) and thus, plenty of looks for polish lovers to take notes on. Walking the multiple red carpets — from the Critics' Choice Awards to the Golden Globes — stars like Lupita Nyong'o and Charlize Theron donned a stark-black polish, while Anne Hathaway and Salma Hayek alternatively sported a barely-there-at-all look. One of the biggest trends hitting the red carpet, though? French manicures. The classic style popped up on Jennifer Lopez, Millie Bobby Brown, and Awkwafina to name a few.

Outside of the Hollywood awards-season bubble, a winter-white shade found its way onto celeb nails like singers' Selena Gomez and Normani. And shine didn't die down from the holidays, with a chrome style making a comeback on stars like Dua Lipa and Joey King.

Ahead, seven of the celebrity nail trends you're going to want to try out this year, plus the polishes to get you started.

How to Wear It: The French manicure is having a major revival. Go for the classic '90s stark-white-and-nude-base vibe like Beyonce and Millie Bobby Brown, or bring the trend to 2020 like J.Lo and Kylie Jenner, who respectively updated the look by adding ombre and a cheetah print tip. Either way, rocking a French manicure is sure to add some retro-glam to any look.

How to Wear It: The seasonal winter white has been making its rounds on celebrity manicures for a while now, but it looks like the shade might be staying around past the cold weather. Stars like Selena Gomez and Priyanka Chopra have been pairing the shade with pretty pinks and softer tones, while Normani's recent take on the color features a full-white outfit that made for a very monochrome look. In any case, keep white in mind when planning your next manicure.

How To Wear It: On the other end of the color spectrum, black is cropping up on celebrity nails again and again. While some stars have been complementing their entire black ensemble with the shade during awards season, take a page from Camila Mendes who proves that the black nail can be used for everyday looks as well: throw on your best Canadian tuxedo and a baseball cap, and the shade is sure to pop.

How to Wear It: Adopt this minimalist trend when you want to take your polish game up a notch without having to recreate meticulous patterns and carve out hours to achieve. Let your creativity flow when choosing what combinations you use for base and dot color, and if you're really feeling adventurous, swap the polish for adhered-pearl-dots like Margaret Qualley did at the SAG Awards.

How To Wear It: Sparkles and glitter is always an easy go-to look — but when you want to change it up a little, go for chrome. Due to the iridescent finish, chrome nails have mega shine and dimension. There's also no shortage of color (in powder form or in traditional lacquer) to choose from so, if you're looking to match your nails to your outfit like Joey King and Dua Lipa, chances are pretty high you'll be able to coordinate.

How To Wear It: A red nail is kind of like a red lip: classic. As with the French manicure, though, celebrities have been adding a modern spin to the look by donning a deeper blood red over the traditional ruby. If darker shades aren't what you usually gravitate toward, a deeper red could be an easy transition into the unfamiliar territory. Luckily, there's also a wide gamut of oxblood shades to choose from so, dipping your toes in the water doesn't have to look like Annie Murphy's dark maroon and instead may look like Margot Robbie's sweeter red.

How To Wear It: Like the no-makeup makeup look, but for nails. Instead of growing out your nails or getting acrylics, this trend is all about going au natural. Celebrities have been showcasing the look on red carpets, opting for nude-to-pink shades to complement the trimmed shape. Keep it simple with something light, or ditch the color altogether and only swipe on a top coat.