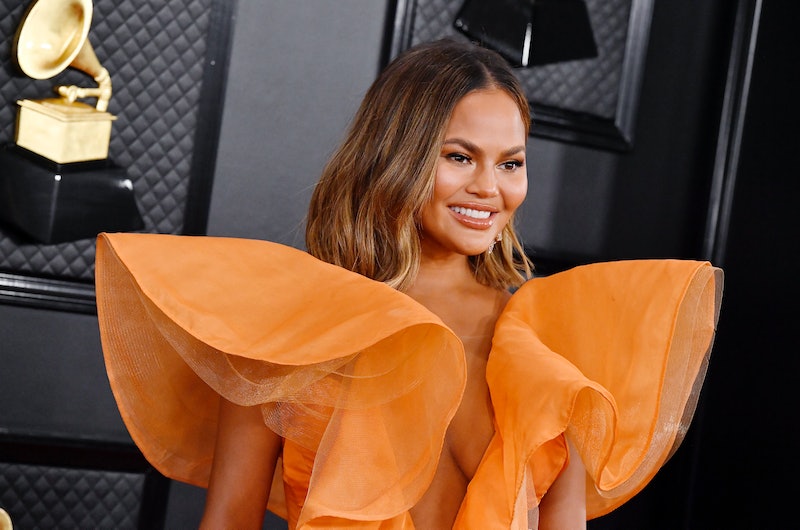 How fast a totally average half-up, half-down hairstyle can be turned into certified red-carpet material could only be attributed to flat-out wizardry or, more likely, a really good accessory. Hair décor is the oldest trick in the book for "faking" a formal updo — throw a metallic cuff around a bun and voila! Bedhead is transformed into a chic look. Chrissy Teigen's gold hair pin is the simplest (and most lavish) trick of the bunch.

Said bling made its debut in an Instagram Story Thursday. Teigen had upgraded her signature around-the-house topknot to half pulled-back mermaid waves courtesy of Amanda Lee, part of Jen Atkin's empire of hairstylists. It was marvelously chic even without the hairpiece, pulled back in a tidy, tufted meeting of twists. But it was no doubt the addition of the metallic pin that made the familiar updo look downright glamorous.

The model's most recent series of Stories was momentous not just for the hair accessory, but also more notably because it marked the first real-time sighting of baby number three. Teigen and John Legend announced their third pregnancy subtly by way of Legend's new "Wild" music video on Thursday. Her visible tummy bulge under an all-black Balmain outfit confirmed it.

The elegant gold-tone cuff is from the designer, too. In fact, it was given to models (Gigi Hadid, Kendall Jenner... ) after Balmain's Fall 2017 runway show. The $360 Paris Hair Couture pin is made from gold leather and backed by velvety, snag-free nubuck. It comes with a corresponding gold-tone pin for added ease and, obviously, style.

In Teigen's case, it was paired with a $1,350 military-inspired blazer, but the piece would complement your outfit of choice and two-second ponytail equally well, given you can afford it. Similar hair pins under the $300 mark (and under the $10 mark, for that matter), ahead.