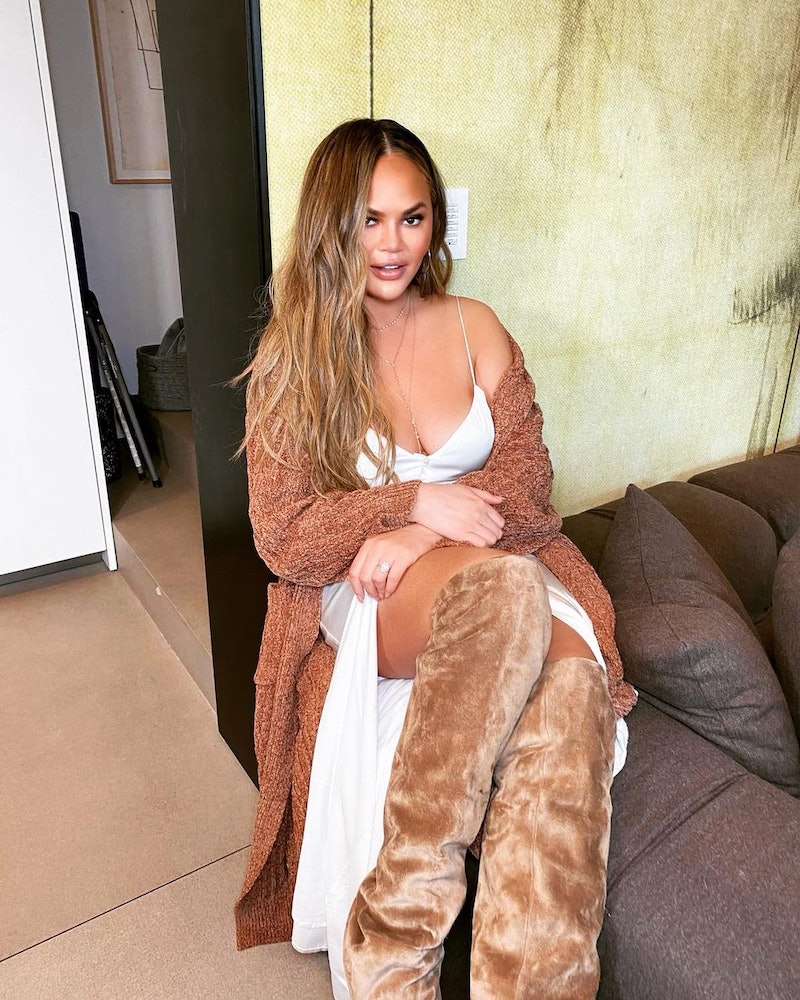 Back in July, when model-turned-food mogul Chrissy Teigen declared a certain amber-colored cutout frock "the dress of the summer,” the internet instantly took note. Not only because everything Teigen does goes viral, but because the garment was irrepressibly chic, striking a balance between fashionable and comfortable that style fans readily embraced. The silhouette was from none other than Cult Gaia, and the appearance all but cemented her love of the brand. Now, for her first respite of the resort season, she’s calling on another one of the brand’s greatest hits. Enter, Chrissy Teigen’s Serita dress.

On Dec. 22, the 35-year-old posted an Instagram story from St. Barts, where she and her family are taking a much-needed vacation. The jaunt was sweetened by her ensemble: a sand-colored knit dress, known all across the internet as the 'Serita.' From there, she posted a side-profile view of the look on her feed, getting honest in the caption about her bodily changes since her miscarriage in September. "Even though I’m no longer pregnant, every glance in the mirror reminds me of what could have been ... But I’m proud of where this entire journey took my body and mind in other ways," the post reads.

Cult Gaia is known to churn out summertime favorites — its seminal Ark bag memorably became the needs-no-introduction bag of the summer in 2019. A year later, the Serita first had its moment — and even with summer 2020 long in the books, the open-back knit is far from losing steam. Its current list of celebrity fans spans names like Hailey Baldwin, Romee Strijd (who announced her pregnancy in the dress), and Kourtney Kardashian. There’s sure to be scores more added to the list before the resort season is up.

To grab the dress in its original shade, Cult Gaia has it in stock at full price ($458) on its site. If you prefer something slightly unique, consider going with its amber or olive shades, both of which happen to be totally on-trend. Shop ahead.