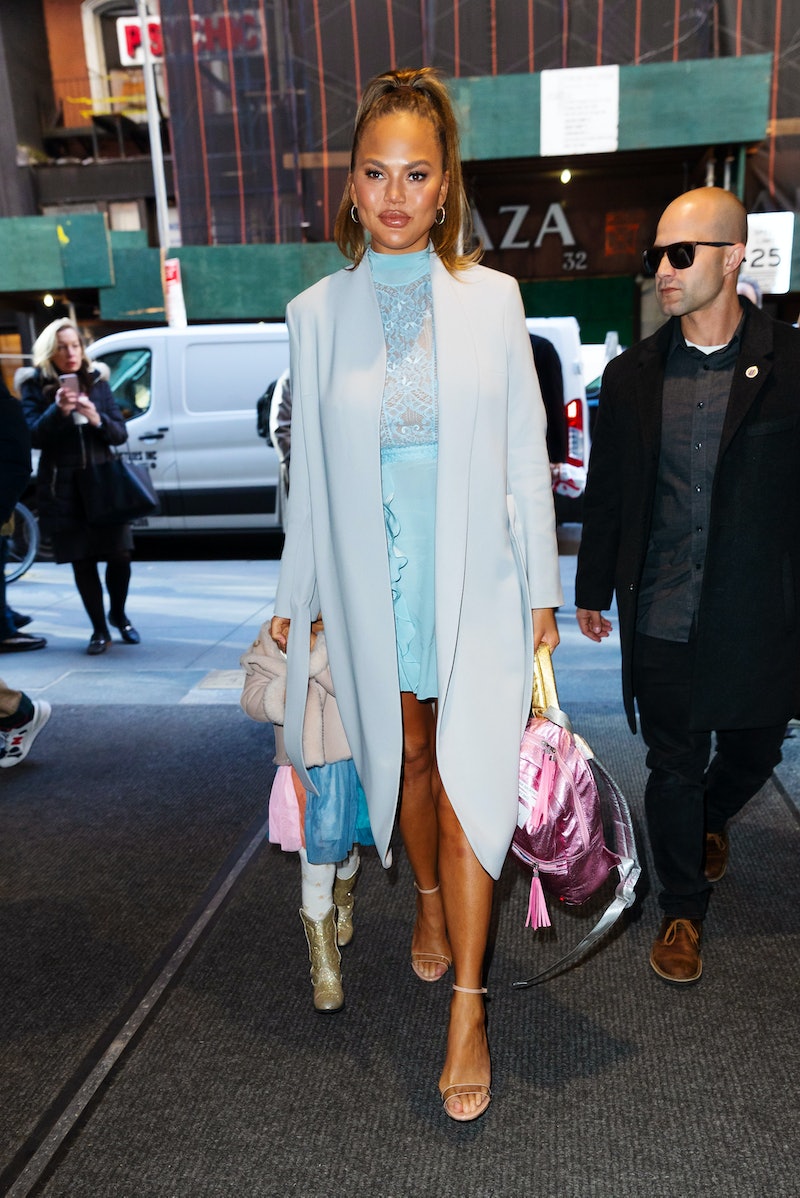 After rotating through one silk kimono after another during quarantine this spring, Chrissy Teigen has finally parted ways with the breezy staple (at least for now). Instead, she's traded it out with another silky piece from a brand that may already be on your radar. As broadcasted through her IG, Chrissy Teigen's Cult Gaia dress is poised to become the next seasonal must-have — and it just happens to be on sale right now.

"I dub this 'the dress of the summer,'" wrote Teigen in her Instagram post on Thursday afternoon. The caption was pinned to a video, showing Teigen in her idyllic bathroom interior, wearing a criss-crossing, amber-hued dress."Look how cute this dress is! It's Cult Gaia and Im obsessed with it," she says in the recording. "It has a little slit; it has a little slit action." The dress, architected by the widely loved brand, is currently in stock and on sale — retailing for $558 on its site.

Given the recent explosion of L.A. brand's similarly cut-out knit dress, shoppers can have confidence that this style will be the next to see a major uptick in popularity. Just after Memorial Day, Romee Strijd announced her pregnancy in the eye-popping, cut-out dress, which was then worn weeks later by Hailey Baldwin in a string of beachy posts, and countless It-girls thereafter. The year prior, it was Cult Gaia's handbags that swept IG feeds everywhere. Net net: every piece the brand creates drums up a "cult" following, and this piece is no exception.

While the frock is already disappearing in smaller sizes, its silhouette has a few different color-ways that can serve as a veritable back-up. Take, for example, its cream hue, which boasts a frayed lace appearance that's destined for beach wear. This shade is also on sale. If you prefer boisterous prints, you're also in luck — there's a multi-pattern take that's available for pre-order now, and shipping Aug. 3.

To shop all three versions, including Teigen's original favorite, scroll ahead: