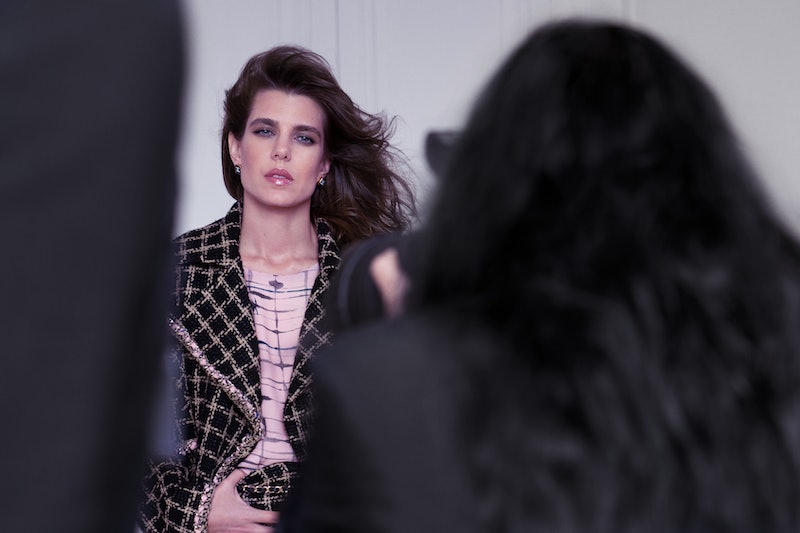 The current list of CHANEL ambassadors is well-rounded and well-considered, including '80s french style icons (Ines de la Fressange) and modern silver-screen doyennes (Kristen Stewart) alike. Over the decades, each of these women earned the accolade in their own right, oftentimes wielding a certain je ne sais quoi that felt apropos of Coco Chanel herself. For those familiar with writer, equestrian, and granddaughter of none other than Princess Grace, Charlotte Casiraghi's appointment as CHANEL ambassador will come as no surprise. For those who aren't — now's the time to get acquainted.

Effective on the first of the year in 2021, CHANEL will welcome Casiraghi into the fold as brand ambassador — along with a bonus caveat. Along with Virginie Viard and the entire fashion house, Casiraghi will host an event series entitled "Les Rendez-vous littéraires rue Cambon" (Literary rendezvous at rue Cambon), through which the talent will invite female creatives to examine their favorite literary and historical works together. As an all-new extension of the ambassador role, the project will draw from Casiraghi's learned background while "perpetuating Gabrielle Chanel and Karl Lagerfeld’s unconditional love for literature," according to CHANEL's press release.

In both her personal and professional life, her style exhibits all the elements of a true CHANEL girl — relaxed, functional clothing, cool eyewear, and subtle, au naturel glam. Casiraghi's outfits are known to oscillate from hyper-feminine to edgy — sometimes, it's crocheted white dresses and ballet flats; others, its baggy sweatpants and a denim jacket. Nothing changes on along runways and red carpets, where gender-neutral suits and printed shift dresses rule the day.

Though her fashion sense is seemingly more lax than her grandmother's (Grace Kelly would never leave the Prince's Palace of Monaco in joggers), the beauty seems to represent what modern-day Grace might have looked like — one that's relatable, unwaveringly herself and still endlessly posh.

Keep an eye out for Casiraghi's ambassadorial debut in CHANEL's Spring/Summer 2021 campaign, which arrives on Jan. 1.