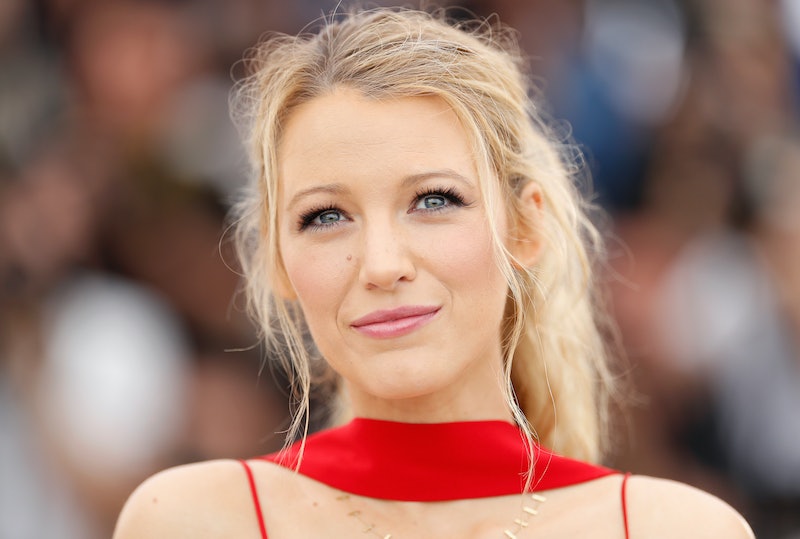 Blake Lively and Ryan Reynolds are known to stay fairly under the radar. And since the couple announced they were expecting their third child, sightings of the duo have become even rarer. As such, the fashion-obsessed have been waiting with bated breath to see a glimpse of Lively's pregnancy style the third time around — and she finally offered up a tiny peek with her latest maternity outfit on Weds. Comfort plays a key role in her dressing approach, so it should come as no surprise that Lively reached for a dress and sneakers — the it-combo of summer 2019 — for a recent (and rare) family outing in the Big Apple.

Before Weds., the last Lively and Reynolds sighting occurred on May 25. That time, the actor reached for a pair of dark-wash skinny jeans, a loose-fitting gray T-shirt, a longline cardigan, and white Adidas sneakers, topping it all off (literally) with an über-chic floppy hat — a classic accessory that was widely embraced in the 2000s and has clearly become a key part of the 31-year-old's pregnancy style. Just take a look at her June 19 getup as proof.

Lively's latest outfit incorporated many of the same pieces she reached for back in May (read: denim, sneakers, and a floppy hat). For the Weds. outing, she opted for a summery, floral-print frock that landed just above the knees, layered over what appeared to be a crisp white tee. She rounded out the look with a light-wash jean jacket, a floppy hat (her new favorite warm-weather accessory), and white sneakers that promise all-day comfort.

Lively's most recent pregnancy outfit demonstrates the mom-to-be is sure to serve up more standout maternity looks in the coming months. It also proves that there's officially a new outfit combo that has taken the celeb style world by storm this season. Just about every notable name has stepped out in some version of a dress and sneakers look as of late (case in point: Kate Bosworth, Tracee Ellis Ross, French model Cindy Bruna, and now, Lively) and there's a simple reason behind it.

The pairing juxtaposes an inherently feminine wardrobe staple (i.e., a dress) with a classic athletic shoe for an easy, breezy, and comfortable outfit that oozes cool-girl vibes. Better yet, the combo works for just about every occasion on your calendar and only takes mere minutes to piece together.

Ahead, The Zoe Report rounded up the coolest dress and sneaker pairings to wear this summer. Shop them all, below.

This soft-pink midi dress looks great with cowboy boots, but just imagine it with chunky sneakers.

This old-school shoe is making a major comeback.

Pair this summer-perfect dress with a clean white sneaker for a day of exploring a new city.

These sneakers are every minimalist's dream come true.

This is the perfect mini dress for summer — and it pairs so well with sneakers.

A classic sports shoe gets a chic update with the addition of faux pearl embellishments on the sole.