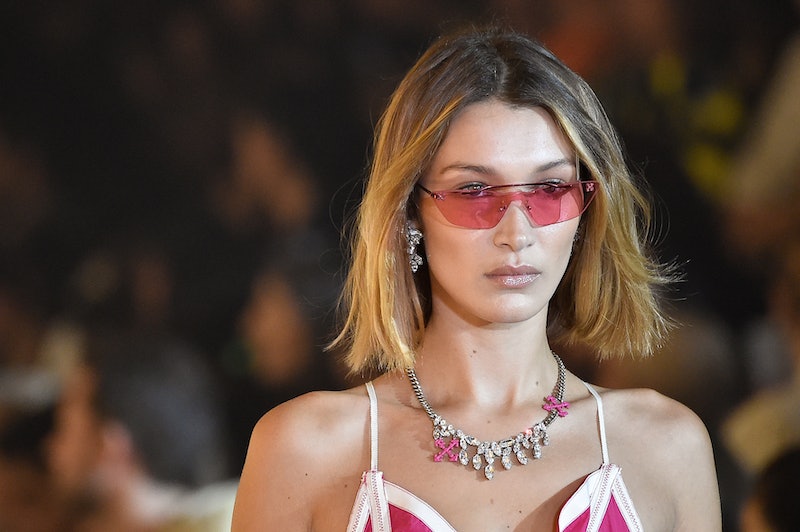 These days, it's nearly impossible to browse though the celeb street-style scene without spotting an A-lister in a leather jacket of some sort. From edgy Matrix-inspired trench coats à la Kaia Gerber to Ciara's leather puffer coat (that's as cozy as it is cool) to Bella Hadid's leather blazer, the buttery material is as quintessential to fall as linen is to summer — and as such, its presence in this season's celebrity style scene shouldn't be a huge surprise. Better yet, leather has been reworked in a number of different ways, but there's something about Hadid's pick that's impossible not to obsess over. It hits on 2019's suiting trend and has that coveted nostalgic edge to it.

Hadid and '90s style go together like autumn and PSLs. The model is rarely spotted not wearing a look that somehow channels the bygone decade. She favors chic hoops, loves her Dickies Girl carpenter pants, and wears Dr. Martens religiously. But no Hadid wardrobe spotlight is complete without mentioning a leather jacket, which she owns in multiples.

On Nov. 3, Hadid was photographed in New York City, taking her off-duty style to new levels of cool with her latest look. Blue denim pants with a slight utilitarian flair and a striped top made up the base of her getup. Sounds simple, right? It was, but the outfit additions kept the outfit from looking anything but basic.

The hero piece in Hadid's off-duty look was an oversized leather blazer. It featured sharp shoulders, two large side pockets, and a streamlined silhouette that makes it incredibly versatile. She threw it over a jeans-and-tee look, but the refined topper would look just as good worn with an LBD come party season.

The finishing touches were several other throwback classics, including hoop earrings, thin-rimmed sunglasses, and her favorite '90s-era bun that she's sported more than a handful of times.

If you don't yet own a leather jacket (or two), consider scooping up Hadid's latest take on the outerwear trend. It's refined but edgy (aka, the perfect combo).

Ahead, shop The Zoe Report's favorite leather blazers with which to recreate Hadid's latest off-duty outfit with ease.