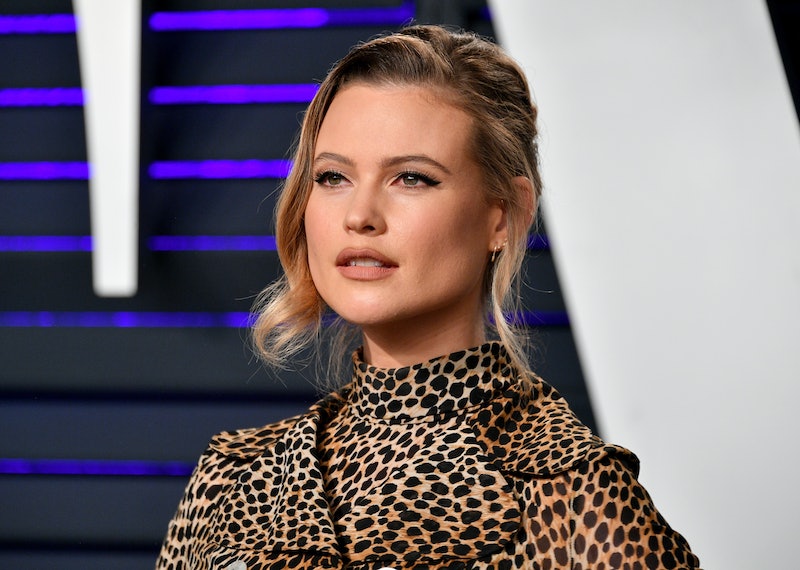 Fashion is cyclical, which means pieces and trends of bygone decades are certain to make a comeback sooner or later. If you held on to those large hoop earrings you wore in high school, for example, you're in luck, because said accessory is back and more popular than ever in 2019. Or how about that bucket hat your mom made you wear? The polarizing topper has earned just about every celeb's stamp of approval, including the likes of Kendall Jenner, Candice Swanepoel, and Irina Shayk. In other words, old-school style is reigning supreme in the fashion world, and Behati Prinsloo's black sneakers are the latest nostalgia-inducing piece to add to the list.

Right now, there are two retro kicks that have popped up on the street-style scene practically nonstop. First, those classic white leather Reeboks from the '80s — you know, the ones that have Working Girl vibes written all over them — have been backed by the likes of Kate Upton, Kate Bosworth, Chloë Sevigny, and most recently, Gigi Hadid. Secondly, the skater-cool shoes that are Vans, which have actually been a fashion favorite for quite a while now, are in demand as ever right now.

Prinsloo is the latest notable name to sport the old-school trainers you likely donned nonstop in your teens — and the occasion for which she wore them certainly called for the tried-and-true comfort shoe. On Mon., the model stepped out for a day date in a Beverly Hills park with her daughter, Gio Grace, in a getup that could've been plucked straight from the early aughts.

Prior to heading out the door for a day of running around the park, Prinsloo reached for a pair of high-waisted, cream-colored trousers with a roomier silhouette. She teamed the bottoms with a cropped cami that appeared to have chain detailing along the neckline and straps.

A watch, a handful of stacked necklaces, tiny sunglasses, and two clips added some extra pizazz, while her black Vans sneakers rounded out her 2000s-inspired off-duty look oh-so-effortlessly.

Whenever you want to add a bit of retro-edge to an outfit, consider slipping into these celeb-favorite kicks. The black color way, with the ubiquitous white side stripe, are just as versatile as a white trainer, but feel inherently cooler.

Ahead, shop the exact Vans Prinsloo was just spotted wearing, plus more of The Zoe Report's favorite old-school sneakers.

There are so many ways you can wear these sneakers, whether with cargo pants and a cami, just like Prinsloo, or with a classic LBD and white ankle socks.

No old-school shoe roundup is complete without a pair of Converse. These are a slightly updated take on the classic shoe, featuring a thicker sole and more durable canvas.

For a no-fuss sneaker that pairs well with everything in your wardrobe, look no further than Adidas' iconic Stan Smith kicks.