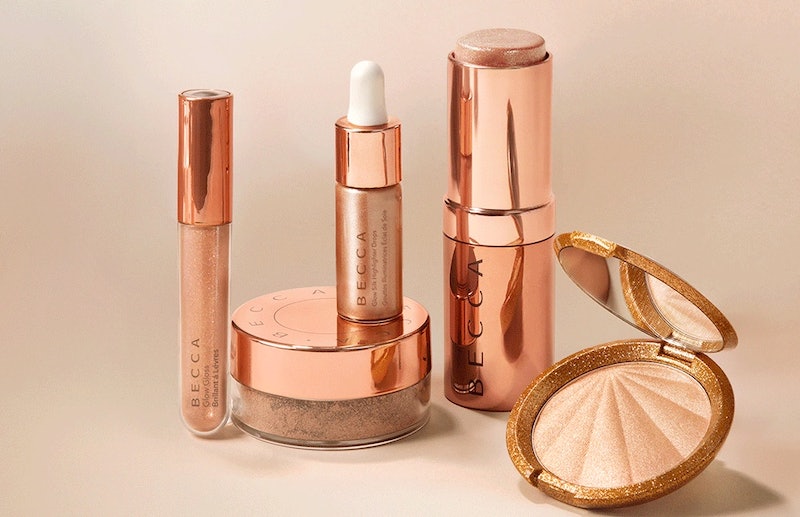 This one goes out to the beauty buffs who can never get enough glow. For anyone who falls into that category, it's fairly safe to say you've given BECCA's best-selling Champagne Pop pressed highlighter a try — and subsequently given the shimmery top-seller a starring role in your makeup routine. And if that's the case some really good news is coming your way, because BECCA's Champagne Pop Collector’s Edition has just been released, and it gives you five glorious ways to get your glow on.

When cult-favorite beauty brand BECCA Cosmetics first released its Champagne Pop Pressed Highlighter in July 2016, it's possible the brand had no idea how much people were going to love it. In fact, the now-famous shade — which was initially part of a collab with beauty guru Jaclyn Hill — started out as a limited-edition product before BECCA made it permanent due to repeated sellouts and incessant fan pleas.

Clearly, the love for the skin illuminator has not died down since then, because on June 6 BECCA released a Collector's Edition drop of Champagne Pop products online and at Sephora to celebrate the fan-adored shade.

The five-product range features limited-edition packaging for the permanent Champagne Pop products, namely the forever-favorite Pressed Highlighter in a very glittery compact and the plumping, high-shine Glow Gloss in Champagne Crème. On top of that, three entirely new products have been added to take the shimmer of Champagne Pop to places it's never gone before.

First up, BECCA has created a Glow Body Stick, $48, in the Champagne Pop shade, so you can give yourself head-to-toe glow in the gorgeous soft gold hue nobody can get enough of. The pearlescent pigments shimmer at every angle, while coconut oil, shea butter, and vitamin E give your skin a dose of moisture. Glide the smooth solid-oil formula onto shoulders, legs, arms — essentially anywhere you want to shine.

Two new formulations of the Champagne Pop highlighter round out the Collector's Edition: the loose powder Glow Dust Highlighter, $42, and the liquid-gold Glow Silk Highlighter Drops, $32. The Glow Dust gives fans of the iconic Champagne Pop shade a micro-fine iteration that's ideal for blending onto skin for a concentrated effect, like the corners of the eyes or the décolleté. And those who prefer fluid formulas will fall for the Glow Silk drops, which have the same gold tone and peachy-pink pearlesence in a buildable format that's easily strobe-like or subtle.

If you can never get enough of BECCA's globally-loved Champagne Pop illuminator, do yourself a favor and stock up now — it's already got a tendency to sell out, so limited-edition versions are sure to be no different.

BECCA's ever-popular ultra-luminous highlighter in the brand's best-selling soft gold shade with peachy-pink pearly pigments is available in a limited-edition collector's compact for the most committed fans.

If you love the warm glow of BECCA's Champagne Pop, why not put it all over? This Glow Body Stick gives you a creamy, conditioning formula that can be slicked onto shoulders, collarbone, legs — wherever you'd like to glow.

BECCA launched a Collector's Edition of its Champagne Pop highlighter in a loose powder formula, which allows you to create a hyper-reflective glow on body, face and eyes.

This conditioning gloss gives lips a plumped look thanks to peptides and multi-dimensional pearly pigments with a high-shine finish. Snag it in the limited-edition Champagne Crème shade that celebrates the bestselling Champagne Pop.