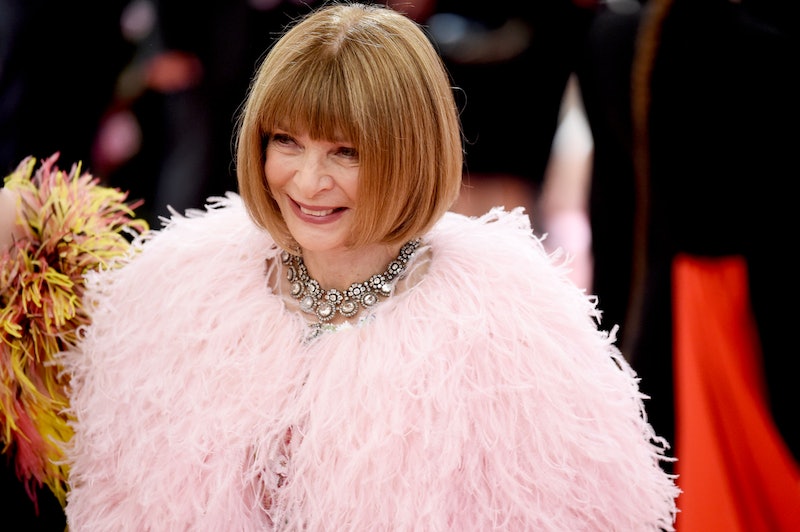 What's easily one of the biggest nights in fashion officially commenced Mon. evening, and many of the ensembles that made their way down the red carpet early on already proved iconic. One of the first to descend upon the iconic museum steps? Anna Wintour, of course, whose 2019 Met Gala dress was plucked straight from Chanel's stunningly beautiful Spring 2019 Couture collection — though the sequin-embellished gown did look slightly different this time around.

Wintour always keeps it classic and chic for the annual event — and though this year's camp-themed soirée certainly encouraged attendees to step it up a notch with their fashion (and beauty) looks, the industry powerhouse found a tasteful way to do over-the-top.

Wintour is known to wear Chanel to the Met Gala — so it should come as no surprise that she turned to the French fashion house yet again this year. The sequin-embellished gown she wore to Mon.'s event first made its debut during Chanel's Spring 2019 Couture runway show back in Jan. — and it actually paid special tribute to the late Karl Lagerfeld.

On Mon., Wintour revealed the feathered gown was the last piece the designer made for her before he died in Feb. "Karl made [it] for me, and Virginie finished," she shared. (Virginie Viard succeeded Lagerfeld as Chanel creative director after his passing.)

It's important to note Wintour's version did look slightly different from the original. On the runway, the floral-embellished number had a noticeable peplum-style top, though hers had a much more toned-down waistline. What's more, the hemline on the editor-in-chief's frock was also a few inches longer.

Wintour actually hinted at that fact that feathers would be a part of her evening attire during a CNN Style interview back in April. “There’s a quote from Sontag’s Notes [on Fashion] that says, ‘Camp is a woman walking around in a dress made of 3 million feathers’ so I think I might be taking inspiration from that,” she said.

The editor-in-chief walked the pink carpet sans her signature sunglasses, though she did stick with her tried-and-true beauty look: sleek, straight hair, a soft smoky eye, and pink, glossy lips. Leave it to Wintour to make camp look super elegant.