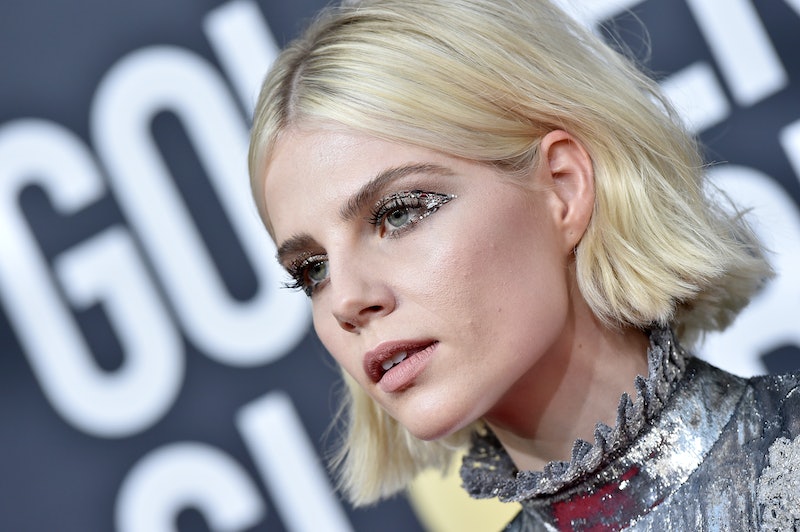 That last-minute grasping for holiday makeup ideas will officially be a thing of the past thanks to Lucy Boynton's generous inventory of eyeshadow looks. The actor has quietly risen in the ranks as a red carpet makeup mastermind. In fact, often, Boynton's looks could be nominees for awards themselves. Never afraid to experiment with color, test out geometric shapes, or pile on the drama, the star has accumulated a plethora of ideas that you can use as a starting point for your festive looks this year.

Since 2020 is all about the eyes, you'll be hard pressed to find a star more fitting for inspiration than Boynton. Often with the help of celebrity makeup artist Jo Baker, she makes appearances on red carpets, dinners, and photoshoots with eyeshadow and eyeliner that are practically destined to be copied.

Take her dripping bejeweled eyes from the 2019 Met Gala for instance, or the hot pink winged liner that Baker painted on back in September of this year. Even her more low-key looks pack a punch, like the pink puff of eyeshadow-meets-blush at the 2019 Santa Barbara International Film Festival or the splash of blue eyeshadow at the 2019 pre-Oscars dinner are not only equally worthy of trying out for yourself, but also relatively easy to put together.

To help you get your holiday makeup planning underway, below, see a handful of Boynton's best looks that are sure to inspire all of your beauty choices.

When it comes to coating your lids in bright shades, sticking with one color is key to keeping it from feeling like an '80s tribute (though that's fine too if it's what you're going for). This sweep of lavender lining Boynton's eyes is only complemented with long eyelashes and a thin coat of lilac-tinged lip gloss.

Mascara is a given, but eyeshadow and eyeliner work wonders when it comes to recreating these iconic '60s lashes. By simply fanning out drawn-on lashes underneath your lower lash line, you'll be able to emulate this look without needing to glue anything on or risk clumping.

Baker painted electric pink wings onto Boynton's lids just for fun and what resulted is an eye-catching look that suits the needs of any makeup maximalist. Neon colors are usually less popular during the holidays, but this pretty pink brings brights right back into focus.

Who knew that flashy and simple could be in the same sentence? This tinsel-reminiscent masterpiece from the 2019 Met Gala features rays of glittery jewels dotting out from behind Boynton's eyelashes paired with brushed brows and dramatic lashes. It's not for the fainthearted, but because there's a lack of color, it makes it feel totally manageable and balanced for a virtual holiday party.

Red lipstick and blue eyeshadow? They said it couldn't be done, but allow Boynton's look to elaborate. As exemplified, it's clearly a matter of selecting the right shades. A pinkish red hue on her lips doesn't compete for attention against the frosty light blue on her lids. Rather, the two actually work really well together.

Replace your browns, taupes, and tans with reds for a smoky eye that's not only refreshingly bold, but undeniably holiday-centric. Wing it out and add a touch of silver to your inner corners like Boynton did here to really play up the festive vibe.

Wow your family members or friends over Zoom with this '60s-inspired design that strays ever so slightly from your usual cat-eye and plays into this year's obsession with graphic eyeliner. Leaving blank space rather than filling in your flick adds a pop without needing any color or extra products.

This could easily be deemed one of Boynton's best looks. Featuring a haze of bright pink that starts mid-lid and works its way out to her cheekbones — this is a fresh idea at its finest. Topped off with a few lashes coated in hot pink mascara and a bright red lip and you're golden for any special occasion.

Nothing quite says the holidays like silver and gold, both of which are worthy additions to your classic smoky eye when winter rolls around. Boynton's silver version here is all the inspiration you need for infusing some festive spirit into those go-to black and neutral eyeshadows.