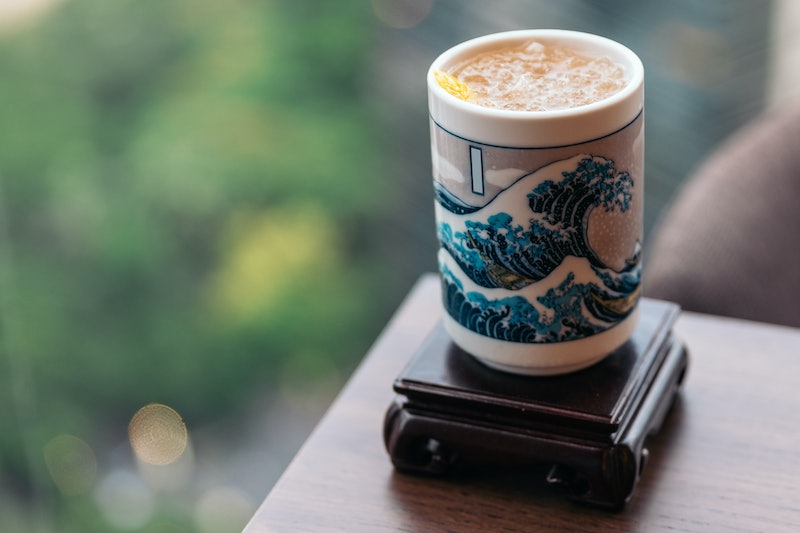 Not only is playing mixologist sincerely fun and a great excuse to get your friends together, it can also save you a few bucks (have you seen how much fancy cocktails cost these days?). And if you're someone who loves to mix things up at home, and entertain your guests in the process, you're probably always on the lookout for new concoctions to try. Enter sake cocktails.

Not only is this fermented rice beverage just as nuanced as wine or whiskey, it also makes for a great cocktail ingredient because of the low alcohol content. So if you're someone who prefers to sip an Aperol Spritz or an Americano because it gives less of a buzz, a sake-based beverage might be a new one to try.

If you're a sake novice, there are a few things to know about this spirit that could help you design your own creative cocktails. First of all, they're not all created equally. Some sake styles are fruity and floral (like daiginjo and ginjo), and some a bit funkier (kimoto), and temperature is a factor, too. "My basic strategy when using sake is to highlight its delicate nature and replace my sweet component with sake, which will add a layer of depth to the cocktail," says Shaun Cole, who designed the beverage menu for new LA eatery, 9th St Ramen as well as The Edmon. "If I am using a nigori (unfiltered sake) I’ll use it with fruit — preferably with tropical fruits such as lychee, passionfruit, or jackfruit, or with stone fruits like plums and peaches."

And when in doubt, for a super simple and foolproof cocktail, one ingredient is key, according to Cole: Lime juice. "My preferred citrus for any sake cocktail is lime juice to balance out the sweet with acidity," he says. If you're sipping ginjo, the expert suggests herbal elements like mint, celery, basil, and cucumber as well.

Ready to start playing around with sake? To get you off and running, find seven easy-to-make cocktails ahead that allow the ingredient to shine — and make you look like the ultimate mixologist.

You literally can't mess up this two-ingredient cocktail that combines plum sake (such as Tozai Blossom of Peace) and mango-flavored seltzer. "This perfect one-minute cocktail is simple and refreshing," says Monica Samuels, Director of Sake and Spirits for Vine Connections. And if mango isn't your favorite flavor, Samuels suggests playing around with whatever other seltzers you prefer. Add an edible flower for a super impressive presentation.

Samuels calls this two-ingredient wonder "a great change of pace for a brunch cocktail." Simply combine your sour beer of choice with plum sake for a slightly sweet, but still well-balanced drink.

If you love an Old Fashioned, Samuels suggests trying this sake cocktail that combines plum sake with bourbon and a few dashes of orange bitters.

This sake slushie, soon to be served at 9th St Ramen, has lovingly been dubbed "Eastside Ginjo" by Cole. If you want to replicate it at home, use two parts of Junmai Ginjo, one part fresh lime juice, and half part cucumber-mint syrup, which you can DIY by steeping cucumbers and mint in hot water, then combining one part of the mixture with one part sugar and straining. Then toss it all into your blender with loads of ice and voila.

"Another great sake cocktail we have up our sleeve features Kamoizumi Nigori Ginjo Nama — it’s an unfiltered sake that is a hair sweeter than your typical ginjo," says Cole. "For this cocktail, we add one and a half parts Kamoizumi Nigori, one part fresh lime juice, half part coconut water. Shake vigorously and double strain over small pebble ice. Garnish with a strawberry and mint."

Vodka soda drinkers should try this cocktail, recommended by Chizuko Niikawa-Helton, director of pop-up Sake Caliente and menu creator for Sakagura in the East Village, for a little change of pace (plus a far lower alcohol content). Just mix rich nigori sake (the cloudy variety) with club soda and ice. Or, for an additional twist, substitute beer for the soda water.

This cocktail highlights a bold style of sake, and should be a hit for your whiskey loving friends. Just combine three to four ounces of and old-fashion Junmai sake (like Kimoto) with a teaspoon of whiskey or bourbon — Niikawa-Helton likes the combo of Daishichi Kimoto and Maker's Mark. Serve on the rocks, or even hot if you prefer.