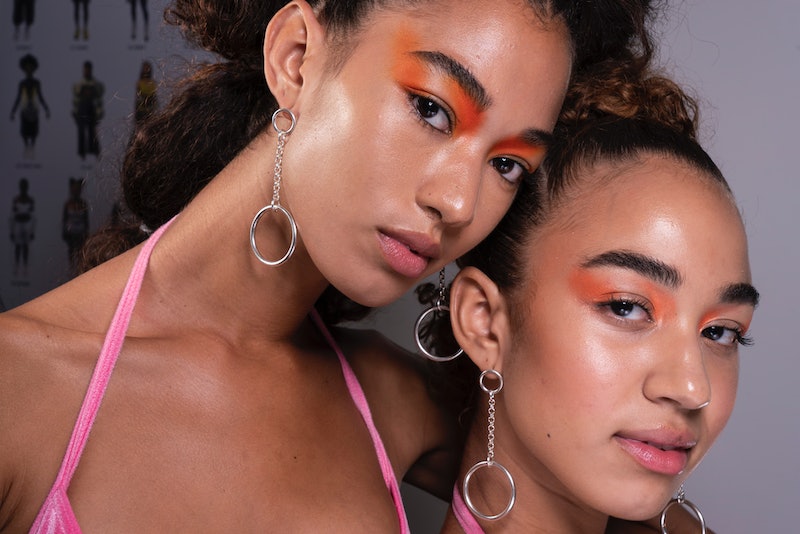 Spring makeup trends can sometimes be a little snoozy, if I'm being perfectly honest. They typically include glossy, perfected skin, a touch of bronzer, and a curl of the eyelashes. Pretty? Of course. But it's kind of like the makeup equivalent of florals for spring — not exactly groundbreaking. That's why this year's New York Fashion Week Spring/Summer 2020 makeup looks were such a breath of fresh air.

They still had those gorgeous touches, like bold brows and blush. But it was like someone added 50 pounds of sparkle to these otherwise ho-hum look. Blush was more graphic. Eyeliner came in bright neon hues. And more than one show send models down the runway with literal sequins in their eyes. It was everything you want when you look at the beauty looks from Fashion Week. This makeup was accessible, sure, but also chock-full of inspiration.

You may not wear glitter eyeshadow every day of the week, of course. But I can all but guarantee that these six makeup trends will have you considering changing up your typical routine. From glossy lips to watercolor eye makeup, scroll on for the best beauty looks we saw backstage at New York Fashion Week. The best part? You don't even have to wait until spring to wear them.

Get the look: Bright, bold eyeliner looks took center stage this season in New York, with makeup artists sketching on neon hues in interesting shapes. At Rosie Assoulin, MAC lead makeup artist James Kaliardos was inspired by doodles Rosie's daughter had made of the paisley print Rosie had utilized on a dress in the collection. He sketched on different colored interpretations of the doodles, using MAC's Chromagraphic eyeliners.

The look was equally bold at Anna Sui, where makeup artist Pat McGrath created three different looks with bright, sketched-on liner. For the yellow shadow look, she dashed a line of the pigment Astral Solstice from her Mothership VI: Midnight Sun across the crease for a pop of whimsy.

Get the look: Imprecise, watercolor-inspired shadows were the dreamiest eye makeup look of Spring/Summer 2020 — and they're super easy to pull off. At Christian Siriano, lead makeup artist Erin Parsons dipped her fingers into a bunch of shadow colors, applying them across the lids and the brow bones in a painterly way. She used a base of Maybelline's Tattoo Studio in Chill Girl, and then mixed hues to her heart's desire.

There was a similar devil-may-care attitude at Chromat, where lead makeup artist Fatima Thomas, working with MAC, applied shadows in a different way for each model. "I'm always thinking about movement when I'm doing this show, because these are clothes you move in," she says. "There's no common thread. Everything is its own."

Get the look: Sure, glitter eyeshadow is always fabulous. But sequins on the eyes? That's a next-level look we saw everywhere this season. At Pyer Moss, Lead makeup artist Daniel Sallstrom and designer Kerby Jean-Raymond aimed for a look based on rock 'n roll and how "dark skin [was so] whitewashed and has completely disappeared from Black history," he says. He used the UOMA Beauty Black Magic Color Palettes to paint primary colors on models' eyes, complete with sequins on a select few.

LaQuan Smith showed a similar look — with one stellar tip from lead makeup artist Sir John. He layered loose glitter with a gel to create a look that was easy to apply and high on shine. The best part? No fallout. Can I get a hell yeah?

Get the look: If you prefer blush over bronzer, then Spring/Summer 2020 will be your season. All week in New York, makeup artists sent models down the runway with bold blush looks that popped on their cheekbones. Lead makeup artist Daniel Martin opted for a Geisha-inspired look at Tadashi Shoji to play off the designer's collection, which was an ode to his heritage. He swept a custom color from Honest Beauty across the cheeks and up around the eyes for a high-voltage blush moment.

At Jason Wu, lead makeup artist Diane Kendal used a Maybelline eyeshadow to create the bold, bright pink shade she swept across the cheeks. She mixed it with a setting spray to create a washed-out, watercolor-like hue that blanketed the cheeks and temples.

Get the look: At Brock Collection, makeup artist Gucci Westman actually brushed highlighter into the eyes to give them shine. "Adding it with a brush makes sure that the color doesn't come off," Westman told TZR. It also ensures all eyes are on the brows.

Michael Kors also showed a similarly bold brow at his show. Using the new Maybelline's BrowFast Sculpt Gel Mascara, which launches in January 2020, lead makeup artist Dick Page layered on the pigment to give the brows some weight before sealing in the look with the brand's Great Lash Clear Mascara.

Get the look: Lip balms are the new lipstick, according to this season's shows — where there was nary a bold lip in sight. At both Anna Sui and Marc Jacobs, makeup artist Pat McGrath opted for a glossy sheen on the lips instead of a bright shade, as she wanted to avoid a lot of weight on the mouth. Instead, at Anna Sui, McGrath dabbed on her Lip Fetish Lip Balm in Clear from her namesake brand. It gave the lips some texture without being too over-the-top — which is exactly what McGrath was after.