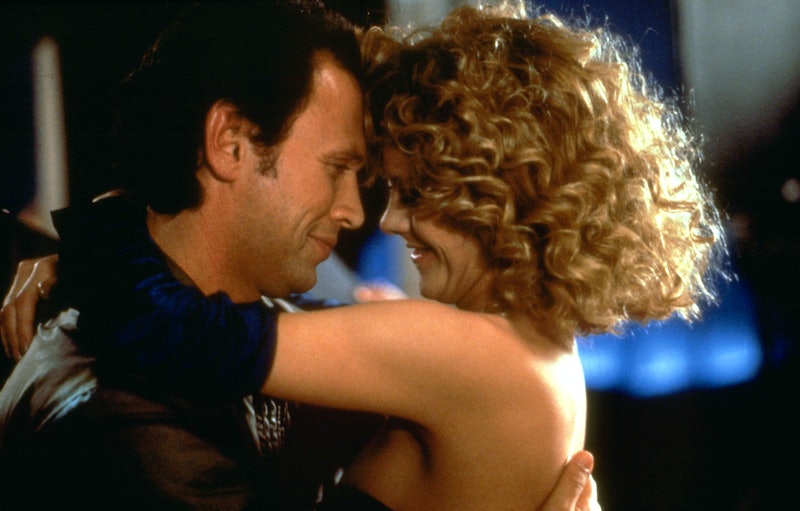 Though it's always nice to have a night in with your sweetheart on Valentine's Day, in 2021, it's really one of your only options. But while you may be disappointed that you're not able to make a reservation at your favorite restaurant again this year, you can still have a romantic night in that feels just as special. All you need is a great meal, a few candles, and a solid Valentine's Day movie to set the mood and encourage maximum snuggling.

However, everyone has different ideas of what that may mean, and deciding on it with your significant other can feel like a daunting task. Do you want a rom-com to make you laugh, like Hitch? An old-school film, like Roman Holiday? Or a classic, like Titanic? The options really are endless, and if you're not careful, you could end up spending the night making a decision (been there) rather than actually watching anything.

To help you avoid falling into that trap, The Zoe Report has rounded up some of the most popular movies to watch on the lover's holiday so that you can easily find what you're looking for and settle right in. Whether you're both hopeless romantics or you like something a little more realistic, there's something for nearly everyone in the list just ahead.

This 1993 rom-com has everything a feel-good Valentine's Day movie needs: Meg Ryan, Tom Hanks, a sweet setup, and a romantic meeting at the Empire State Building.

Anyone with wanderlust and a penchant for Audrey Hepburn movies will love this classic, which features the actor as a European princess who meets an American reporter (aka Gregory Peck) in Rome.

Valentine's Day Movie: To All the Boys I've Loved Before

Want to indulge in a classic high-school romance flick? It's hard to go wrong with To All the Boys I've Loved Before, starring Lana Condor and Noah Centineo. The film is a funny-but-sweet journey of Condor's character after her private love letters are exposed — and the best part is there's a sequel, if you end up loving the first.

Set in 1957, this movie stars Nnamdi Asomugha, who plays a saxophonist, and Tessa Thompson, an aspiring television star waiting for her fiancé to return from war. It chronicles their relationship, as it begins as friends, ends, and then picks back up again years later when they discover their feelings for each other haven't changed.

Will Smith, Eva Mendes, Kevin James, and Amber Valletta make up this romantic comedy about a professional "date doctor" that finds a woman his tricks don't seem to work on.

Be warned: Though P.S. I Love You is romantic, it's also a tear-jerker. If you have a box of Kleenex prepared, watch as Holly Kennedy (played by Hilary Swank) tries to move on and find love again after the difficult death of her husband.

Valentine's Day Movie: Call Me By Your Name

This visually stunning coming-of-age film shows Elio Perlman (Timothée Chalamet) and Oliver (Armie Hammer) as a romance blossoms between them while Oliver is staying at Perlman's 17th-century villa in 1980s Italy.

It doesn't get more classic than the 1989 movie When Harry Met Sally, starring college graduates played by Billy Crystal and Meg Ryan who meet thanks to a long car ride and then run into each other years later and attempt to stay friends.

Hailed as a fresh angle on the traditional rom-com, this heartfelt film depicts a blossoming relationship between a Pakistani-American comic, Kumail Nanjiani, and an American graduate student, Emily Gardner, while they navigate the clashing of their cultures. When Gardner mysteriously falls ill, Nanjiani finds himself bonding with her parents — and on a journey to discover himself.

Though you won't get much of a happy ending with Titanic, it's difficult to go wrong with this epic romance starring Leonardo DiCaprio and Kate Winslet from 1997.

Indulge in a night of nostalgia with this Drew Barrymore classic. In it, Barrymore (aka Josie Geller), pretends to be a high school student and infiltrates the popular clique, all the while falling for her dreamboat English teacher.

This hilarious movie is filled with love, dazzling wealth, and a star-studded cast (including Henry Golding and Constance Wu), and is perfect if you want something lighthearted and fun for your night of cuddling.

Maybe try this one if you're not big on the mushy stuff: It follows a hopeless romantic (played by Joseph Gordon-Levitt) who falls in love with — and is then dumped by — his girlfriend (played by Zooey Deschanel) as he attempts to figure out what went wrong.

In Love, Simon Nick Robinson plays a 16-year-old Simon Spier, who hasn't yet told his loved ones that he's gay and is falling for a classmate online he doesn't know the identity of.

Often considered one of the most imaginative takes on a love story, this film, starring Kate Winslet and Jim Carrey, is an exploration of love, breakups, and redemption — in an unexpected way.