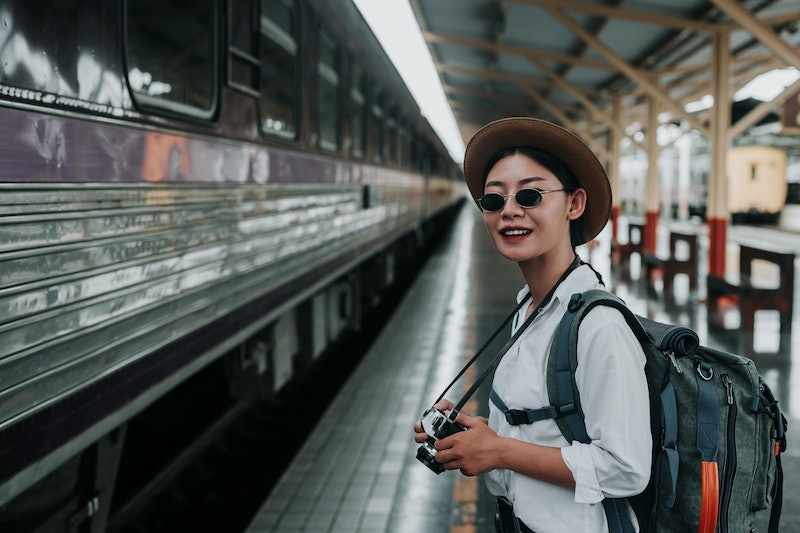 When it comes to vacation transportation, airplanes usually come to mind, but this fall, consider slowing down to tour cities by train. Chugging along tracks that wind through forests, behind buildings, and along coastlines will give you a front-row view of the changing scenery while allowing you to sit back, relax, and savor the view (hot chocolate or cocktail, optional). So, if a leisurely tour of the countryside sounds like the perfect seasonal escape, you'll want to book an inexpensive train trip for fall.

As it turns out, autumn may be the best time of year to book a vacation, especially if you're looking to score some bargains and avoid crowds. Many destinations experience a tourism lull between summertime and the holidays, not to mention, comfortable temperatures and jewel-toned leaves can make your visit ideal. In general, train tickets are usually more affordable than airfare, and though they, too, can vary in price, some are cheaper come this time of year — and just in time for the leaves to turn.

Ahead, Staffo Dobrev, a budget travel expert at the bus and train booking site Wanderu, shares the US and Canada's 10 best train trips to check out come September (plus average ticket prices). From shorter routes worthy of day trips to all-day affairs that can launch a weekend or weeklong getaway, when it comes to train travel, remember that it's about the journey, not the destination.

Take in the sights of New England on the Amtrak Downeaster, which runs from Portland to Boston. Spanning about two and a half hours, this family friendly ride is just long enough to gaze at the changing leaves without being too tedious for kids. (You can even grab drinks and snacks in the cafe car.)

There are plenty of fall festivities to enjoy in both cities. Event venue Thompson's Point is right next door to the train station (view their upcoming calendar), or head downtown to taste the local food and beer scene. Once in Boston, stop by a festival, walk the Freedom Trail, then sign up for a a trolley ghost tour come evening.

Consider crossing country borders — without going too far — with a breathtaking three-hour train tour in Canada. "From one historic French-Canadian city to another, this route runs nine times per day on VIA Rail, Canada’s passenger-train service," explains Dobrev. "The changing leaves especially complement the iconic architecture of Québec City’s Château Frontenac, a hotel built by the Canadian Pacific Railway in 1893. While in Montreal, make sure to stop by Mount Royal Park, which is the highest point of the city and offers an incredible palette of foliage colors, thanks to its abundance of elm, ash and maple trees."

Consider this seven-and-a-half hour ride the first leisurely excursion of weekend getaway. "The best part about this route is the fact that it runs right along the Columbia River," says Dobrev. "There’s nothing quite like the sight of colored leaves reflecting off the water as you follow the gorge from Portland up into Eastern Washington state. If you happen to pass by the area in the afternoon, make sure to also look up at the peaks because the setting sun provides for an absolutely breathtaking natural canopy."

After leaf-peeping your way to Spokane, Dobrev suggests heading to Green Bluff Farms for apple picking, another classic fall pastime.

Get your fill of foliage by booking a daytime departure, then arrive in Reno about five hours later, just in time for a dinner followed by a night of (undead) Halloween fun. "This stretch [covered by] Amtrak’s California Zephyr cuts through the Tahoe National Forest, past quaking aspen, and big leaf maples nestled among the pine trees," says Dobrev.

He adds, "You can get the most out of the season by participating in Reno’s Zombie Crawl, an all-night Halloween-themed bar crawl that includes stops at four casinos."

Those ready to escape the city and hunker down in a cozy train car will love savoring this 11-hour ride on the Amtrak’s Adirondack. "This route will take you right through the heart of one of the most popular foliage areas in the country: The Adirondack Mountains in upstate New York," Dobrev says. "The entire journey from start to finish is a unique treat to the eyes as the train passes through Saratoga Springs, Hudson Valley, and Lake Champlain, continuously revealing more and more of nature’s gorgeous fall palette."

He also notes that from September through early November, you'll be able to catch panoramic views from the top of Amtrak's two-story Dome Car.

Biking fans, take note: This route can inspire an active getaway for your fall bucket list. But first? Spend 15 hours aboard a train, relaxing and soaking in the sights before hitting the trails. "From Salt Lake to Denver, you’ll swing south past Arches National Park before passing through a series of pristine Colorado national forests," says Dobrev. "Right before Denver, the train travels through the White River, Arapaho and Roosevelt National Forests; these are some of the areas with the longest periods of fall colors in the country."

After disembarking, he recommends making your way to the Cherry Creek Bike Trail, "a 40-mile stretch starting in downtown Denver that follows a tree-lined stream all the way to Cherry Creek State Park."

Another long sojourn at 14.5 hours, this route may be the most scenic and cost-effective way to go from Washington to Cincinnati. "The Amtrak Cardinal offers a tour de force of fall foliage, with sections in the Shenandoah and Monongahela national forests," explains Dobrev. "Not only that, but it also passes through the George Washington and Jefferson National Forest which will be steeped in stunning fall foliage colors throughout October and early November.

"Cincinnati itself is especially picturesque this time of year — the train tracks follow the mighty Ohio River all the way to the city and the beauty of the foliage is further amplified by its reflection in the water."

With sizzling summer temperatures beginning to cool down, the autumn months may be the best time to enjoy the hiking trails and nature that Arizona has to offer. "Snake through the southwest, where bright shrubs and sagebrush take on the shades of fall," recommends Dobrev. "The landscape is largely composed of colors and rock formations that define the region, including a span through Arizona’s Petrified Forest National Park."

Going from Dallas to St. Louis is another all-day affair (close to 16 hours), but it's certainly not without its share of natural beauty. "Spend some time along the Mississippi River as Amtrak’s Texas Eagle takes you from Dallas up to The Gateway City, including highlights in surprisingly scenic Arkansas," Dobrev says.

Once arrived, "visiting St. Louis in autumn calls for a stop at the Missouri Botanical Garden: 79 acres of lush flora to wander at your leisure," he points out.

This one's for the coffee and vino fanatics. "Take off just outside of San Francisco for a truly gorgeous ride through California wine country (from Napa north to Redding)," says Dovrev of the nearly 22-hour ride. "The train cuts right by the Shasta-Trinity National Forest and the world-famous Crater Lake National Park, providing riders with a front-row seat to some of the most beautiful natural scenery in the world."

He continues, "Approaching Seattle, you’ll truly appreciate the glow of fall along the Puget Sound and its inlets before enjoying a seasonal latte from one of the numerous independent cafés in America’s coffee capital."