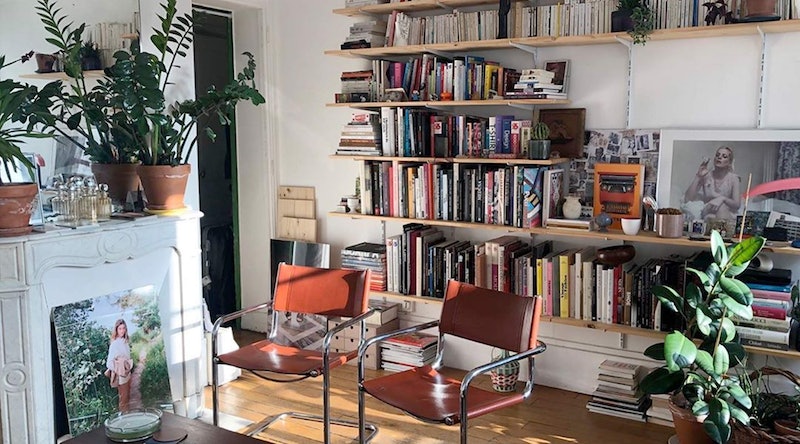 Good things take time. Research, trial, error, strategy, execution: Creativity is a nuanced process. The advent of fast fashion and social media has cultivated a society that craves immediacy in place of nuance, often at the cost of originality, the environment, and ethical manufacturing. Throughout the last few years, the fashion industry at large has noticeably shifted its concentration toward sustainability. Some progress has been made — including the implementation of recycled materials, non-toxic chemicals, cleaner supply chains, and fair wages — but one pocket that warrants further attention is speed. The slow fashion movement aims to combat the issues related to industry's fast pace, and an unintentional side-effect of the COVID-19 pandemic has been a forced reckoning with current production.

"Slowing down is not an innovation, it is a necessity that experts have been advising the industry to adopt for decades now," Slow Factory Founder and Creative Director Céline Semaan tells TZR. "When we are talking about slowing down, we also want to look at less production, fewer products altogether, upcycling, and none or as little waste as possible." She shares that according to The True Cost, a 2015 documentary, the average American now generates 82 pounds of textile waste each year, which adds up to more than 11 million tons of textile waste from the U.S. alone. "That means it's about 30 times the Empire State building of textile waste produced by the US alone," Semaan adds. This textile waste is not solely caused by the individual, it's also a major problem among designers and manufacturers.

"Luxury [fashion] houses today have had to adapt to the same rhythm of fast fashion with four to 10 collections a year, sometimes even 12 with capsule collections," Nomasei Co-Founder Paule Tenaillon says. The industry veteran designed for Goliath labels like Chloé and Jil Sander prior to starting her own footwear company with Marine Braquet. "When I began to design shoes 20 years ago, we were doing two collections a year ... which meant that we had a month to do research and two months to develop our last structures and prototypes. And above all, the factories had time to develop the models correctly."

Fast forward to approximately seven years ago, she says, and the idea of time had officially became categorized as a luxury, not a necessity. "The result was that we didn't have the time to think and reflect, and developed more than we actually needed because we were afraid to miss trend-driven opportunities," Tenaillon notes. "We also ended up creating a huge amount of waste because we would throw away thousands of prototypes and samples."

She also attributes a general lack of newness on the runways to this quick pace. "As a designer, when you don’t have time to properly and creatively research, you find the most efficient way possible to do your job, which is often going through vintage archives," Tenaillon adds. "Many designers have the same references on what were the great periods in fashion, so this is how we end up with these never-ending fashion cycles, inspired by the '70s, the '90s, etc."

It's no surprise that the zenith of these fatiguing work conditions Tenaillon refers to occurred right around the same time the tidal wave of new direct-to-consumer and independent brands began cropping up. Exhausted from trying to keep up and longing for creative outlets, many entrepreneurs exited the corporate luxury scene and started their own lines. One such label includes Hong Kong-based YanYan Knits.

"As designers, slowing down the process makes everything more enjoyable," Co-founder and former Rag & Bone knitwear director Phyllis Chan says. She and her business partner Suzzie Chung begin each new collection with an unorthodox approach. "We go through our factory's leftover stock and come up with a strategy on how much development or production we can use and how much new yarn we have to incorporate," Chan says. "Sometimes there is only enough left for sampling. Other times it's almost like deadstock, and there's only enough for a small run of production. Starting the process this way means all this material is limited and very precious to us, we can't afford to be wasteful at all."

Of course, not every designer chooses to work this way but the sentiment still rings true: it is time to reimagine the cycle — for creativity's sake and more importantly, the environment's.

It's natural to point fingers at who's to blame for all of this. Instagram, fast fashion, influencers, greedy corporate executives, but the more all-encompassing answer may have to do with our collective mindset. "Psychologically, I believe the number of collections combined with a fast-paced trend cycle convinces [us that we] need more stuff," SVNR Founder Christina Tung says. The Brooklyn-based designer crafts from upcycled and vintage materials and carries over the majority of her archival styles season to season. "The more 'new' styles and trends that rapidly come out, the more it drives consumers to feel the need to shop and continuously update their wardrobes."

This ultimately causes a trickle-down effect that leads to more waste. "If we're able to reset the fashion cycle to a slower pace, designers would have more time to make mindful decisions and find creative solutions in regards to designing and sourcing, challenging themselves to inquire about the ethical practices from their textile partners, create patterns with less cutoff, and reuse leftover materials."

So how does it happen? Unsurprisingly, the answer is complicated. "I think it would be oversimplifying the problem to ask designers to be responsible for that decision," Chan says of reducing the number of collections released per year by a brand. "Decisions like that often go beyond the designers. It affects finance and sales and production, as well as wholesale accounts depending on brands to bring newness into their shops every month."

YanYan can be more nimble and achieve a slower, more thoughtful production process thanks to its small size and business model. But their methods don't logistically translate to large luxury labels. But not all hope is lost. Chan offers up two paths to slowing down: an open-minded consumer and a supportive team.

"I do believe the customer is changing slowly and is willing to spend more time understanding the product," Chan says. "I also think more designers should be responsible for problem-solving leftover inventory and materials but should be given the space and resources to do so. They should [be] supported ... normally it would feel too risky for the sales and finance team to have designers revisit fabric or styles that are not selling."

The short term solution, it seems, is to use your power as a consumer. Support brands that value slowing down and that don't churn out new product every week or month. Invest in pieces you'll wear for many years to come and don't buy items unless you really love them. Reexamine your relationship with fast fashion, an industry that often prioritizes its product and profit over the treatment of its employees.

"The fashion community is at a pinnacle moment where we need to rethink the existing system,” Tenaillon says. "Fashion and luxury are incredibly pollutive industries. This is why we say that the first step to sustainability, before anything else, is to take a step back, think, and reflect before launching a product. This way, you avoid waste in the first place."