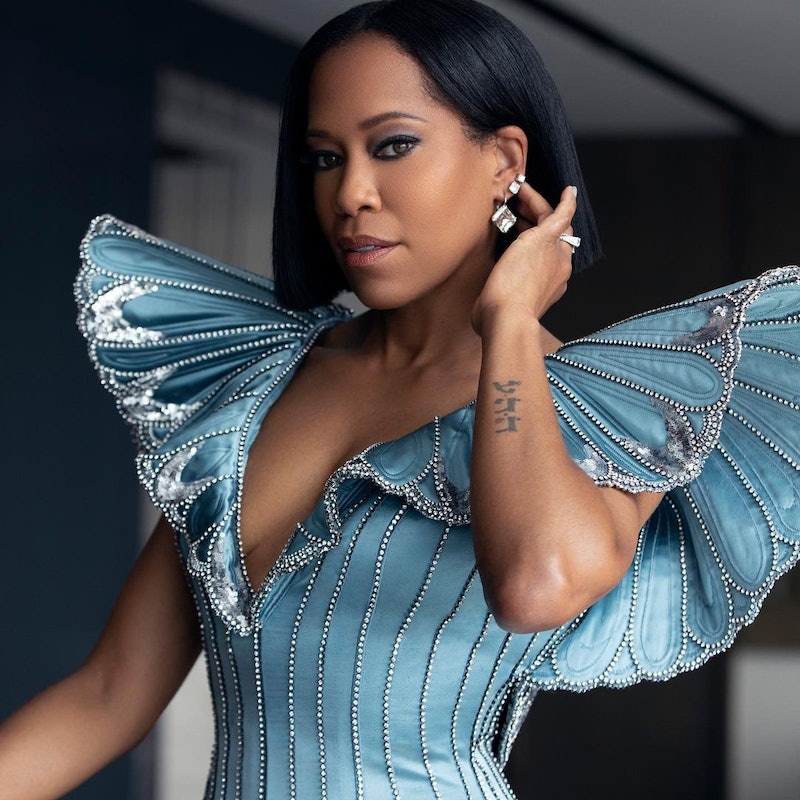 After a year of showcasing their at-home award shows glamour via Zoom and Instagram, celebrities were finally able to shine in person on the red carpet at the 93rd Annual Academy Awards. No one better revived the magic of a star-studded showcase than red carpet royalty Regina King. She wore a custom sky blue Louis Vuitton gown with Forevermark jewels. Her opulent designer dress was one of Sunday evening’s most standout looks and it featured a subtle, high-fashion connection. King’s Oscars dress was inspired by a butterfly cape from Louis Vuitton’s 2020 Resort collection.

During Louis Vuitton’s 2020 Resort show, Creative Director Nicholas Ghesquière introduced an intricately embroidered cape that emulated the wings of a butterfly. Through the use of rigid diamond lining and scalloped hems, the cape created this fantastic in-flight illusion. On Oscars night, King’s duchess satin flared dress further explored the butterfly motif by tapping into the exaggerated shoulder trend to create a striking winged silhouette. The elaborate dress, overall, took over 140 hours to complete and featured jaw-dropping details like 62,000 sequins and 3,900 sparkling stones.

In an interview with Vogue, King’s longtime stylists Wayman Bannerman and Micah McDonald revealed every element of the dress, including the thousands of sequins, was done intentionally. “All of Regina’s looks this season were conversational; they’re designed to evoke a reaction in the audience watching,” said Bannerman. “We wanted to bring something special that lifts the spirits. After everything we’ve been through in the past year, we wanted to create beautiful imagery that people can sit at home and be inspired by or talk about with their friends and family.” The two stylists also previously dressed King in Louis Vuitton earlier this awards season for the 2021 Golden Globes, but her Oscars look was the best one yet. “We always try to tell a full story. We had to make sure that the finale was a proper ending to a beautiful season,” said McDonald.

Regina King In Louis Vuitton At The 2021 Oscars: