A look at her hair evolution. 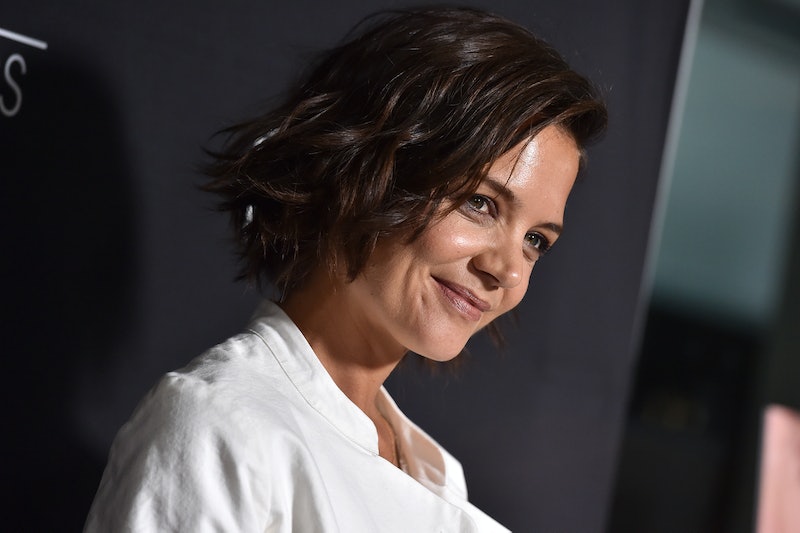 When Katie Holmes made her Hollywood debut, she was just 19. She quickly rose to fame in her iconic role as Joey Potter on ‘Dawson’s Creek.’ Holmes grew up in Toledo, Ohio, and in her early red carpet appearances, often embodied an All-American, girl-next-door look with vintage-feeling springy curls and youthful styles, like lace dresses and spaghetti strap tank tops. But, by the early 2000s, she was coming into her own, and Katie Holmes’ hairstyles grew edgier with various iterations of bangs and choppy layers. She experimented, at times, with highlights, but has mostly, stayed true to her hair’s natural — and signature — hue, a gorgeous chocolate brown. Holmes’s most dramatic hair change came in 2008 when she chopped her long locks into a severe bob with blunt, straight bangs. Since growing it out, she’s returned to a more classic look, sticking with her signature color and shoulder, or longer lengths. Now 42, Holmes looks better than ever — even in 2021’s requisite accessory — a face mask.

Below, revisit some of her best hair moments from the more than two decades she’s been in the spotlight.

Holmes hit the scene with this twisted updo after she secured her star-making role on ‘Dawson’s Creek.’

Holmes’s hairstyle took a turn in a sleeker direction with this lob with face framing layers.

This sleek and straight long-haired look was all the rage in the new millennium.

Here, Holmes has super light highlights — a rare move for the star who has typically stuck to her natural dark brown hair color.

Holmes kept a lighter color for a time, though she let darker roots grow in.

Back to a darker brown shade and a longer length, Holmes wore her hair in waves for this ‘04 red carpet.

Holmes is giving off major Audrey Hepburn vibes in this classic white dress and polished updo.

An edgier look for the actor, here she has waves with choppy bangs.

One of Holmes’s most dramatic hair transformations — she chopped her hair in to a dark, angled, Anna Wintour-esque bob in ‘07.

Keeping the bob, Holmes softened the look with piecey bangs.

Having grown out the bob, Holmes returned to a signature of hers — waves, with pretty sideswept bangs.

Even though this side-parted look was worn eleven years ago, it still looks classic and relevant today.

Holmes proving that a sleek blowout with a little body is always on trend.

The chic, blunt bangs Holmes rocked on the red carpet may have been clip-ins — either way, they look great.

Holmes has long been a fan of a sleek and simple ponytail.

Holmes looked like the ‘Belle’ of the ball in this voluminous yellow gown and tousled, wavy shoulder-length ‘do.

The slicked-back top portion of this otherwise classic style adds drama to the look.

This slicked back updo kept the gaze on Holmes’s moody eye makeup and this gown’s dramatic neckline.

This wavy bob is the epitome of effortless style.

A return to a Holmes classic — sleek and straight hair