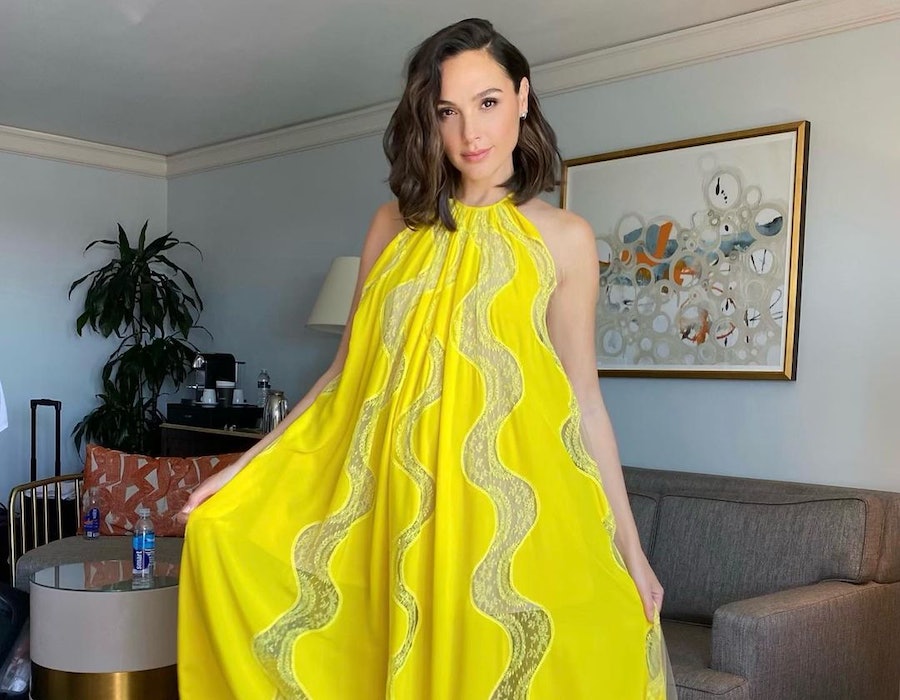 By now, Gal Gadot has shown the world that she is a Hollywood powerhouse not only on screen but in real life, too. The actor once served as a combat trainer in the Israel Defense Forces, filmed Wonder Woman reshoots while five months pregnant, and, now, she’s releasing a docuseries called Impact. According to Galdot’s IGTV post, the project tells the stories of exceptional women making a true impact in their communities and the first episode was just released with National Geographic. For her press tour, Gadot wore a yellow slip dress from Monse and promptly reminded everyone why she’s also a dynamic force when it comes to fashion.

In an Instagram photo shared by her stylist Elizabeth Stewart, the Israeli actor wore an elegant cutout slip dress from the label’s Spring/Summer 2021 collection. With Stewart’s helping hand, Gadot paired the on-trend item (yellow is one of Pantone’s 2021 colors of the year) with some equally graceful Alexandre Birman Nelly square-toe sandals in a similar dandelion hue. Albeit the fashion-forward color was rather bright, the look turned out to be quite minimal due to the sleek fabric and clean lines.

To give her own spin on the designer look, Gadot styled it a little differently than how the dress first appeared on the model. Instead of wearing a pair of chunky white sneakers with the marigold number, Gadot accessorized it with heels. The slip dress, thanks to its versatility, worked with both footwear options. Should you want to be a bit fancy — rock your slip with heels like Gadot did. If you’re going for more of a Friday night dinner-date look, sneakers might be a good option for those post-dinner strolls with your partner.

For those who kept an eye out on the biggest runway trends this season, you’ll spot not one, not two, but three major trends in this Monse look. There’s the color yellow (as seen on Paris Fashion Week’s Spring/Summer 2021 runways), the cool, but tricky-to-wear cutout design, and then, of course, the slip dress itself — a garment that reigns supreme for spring. Gadot’s not the only one showing her love for the sunshine hue either. Most recently, Zendaya wore a yellow Valentino cutout dress to the 93rd Annual Academy Awards and a few months ago, Jennifer Lopez hung out poolside in a lemon-colored bikini. Shop Gadot’s exact look, below, as well as several other similar dress options.