She loves an affordable shoe. 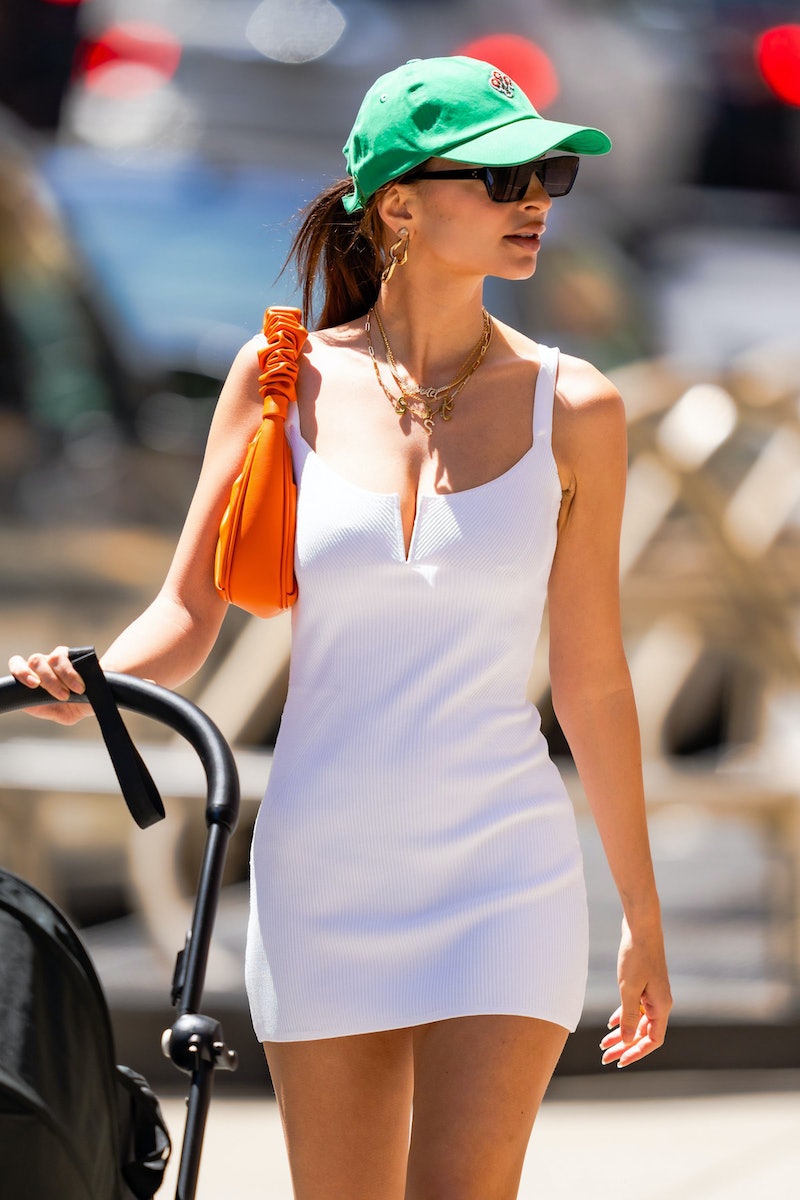 When you have a productive, errand-filled day in New York City, comfy sneakers are traditionally the ideal shoe choice. Sure, strappy sandals are an enticing way to dress up a casual look, and the house slipper trend can feel surprisingly luxe, but be honest: Do you want to spend the day side-stepping sinister puddles of mysterious liquids (shudder), or do you want to confidently strut around the city in a reliable pair of kicks that’ll help you take care of business? For Emily Ratajkowski, the answer is clear: On June 20, Ratajkowski wore Reebok sneakers while on a stroll in New York City. Not only did her white trainers look as comfy as can be, but they’re also an affordable steal at $70, which makes them an easy add-to-your-checkout cart decision.

While pushing her son, Sylvester Apollo Bear, in a black and gold Versace stroller, EmRata wore a simple, cherry-colored spaghetti strap dress. The model accessorized her daytime ensemble with a golden herringbone chain necklace and geometric, square-shaped sunglasses. Then came her sneakers — a throwback-inspired, ivory pair with green piping from Reebok’s 35th anniversary Club C line. In lieu of pointy heels or a chunky boot, which may have otherwise completed her daytime look, the sleek sneakers gave her outfit a comfy and stylish take on a running-errands outfit.

Ratajkowski’s Reebok sneakers aren’t the only under-$100 trainers to be found in her shoe collection. While running errands in NYC during late May, she wore a pair of $85 white sneakers from Aldo that were similarly influenced by vintage styles. But, unlike the sleek shoes she wore this past weekend, her Aldo sneakers were slightly bulky and voluminous, making them feel dadcore adjacent — chunky dad-inspired footwear clearly isn’t going anywhere.

To shop Ratajkowski’s affordable sneakers — both streamlined and chunky alike — scroll ahead to find a selection of shoes to choose from. Best of all, the shoes listed below are all under $100 and endlessly versatile when it comes to styling them. Pair with a dress, as Ratajkowski did, for a sporty-meets-girly feel. Or, go for a foolproof outfit of jeans and a T-shirt for a classic look that will never steer you wrong.