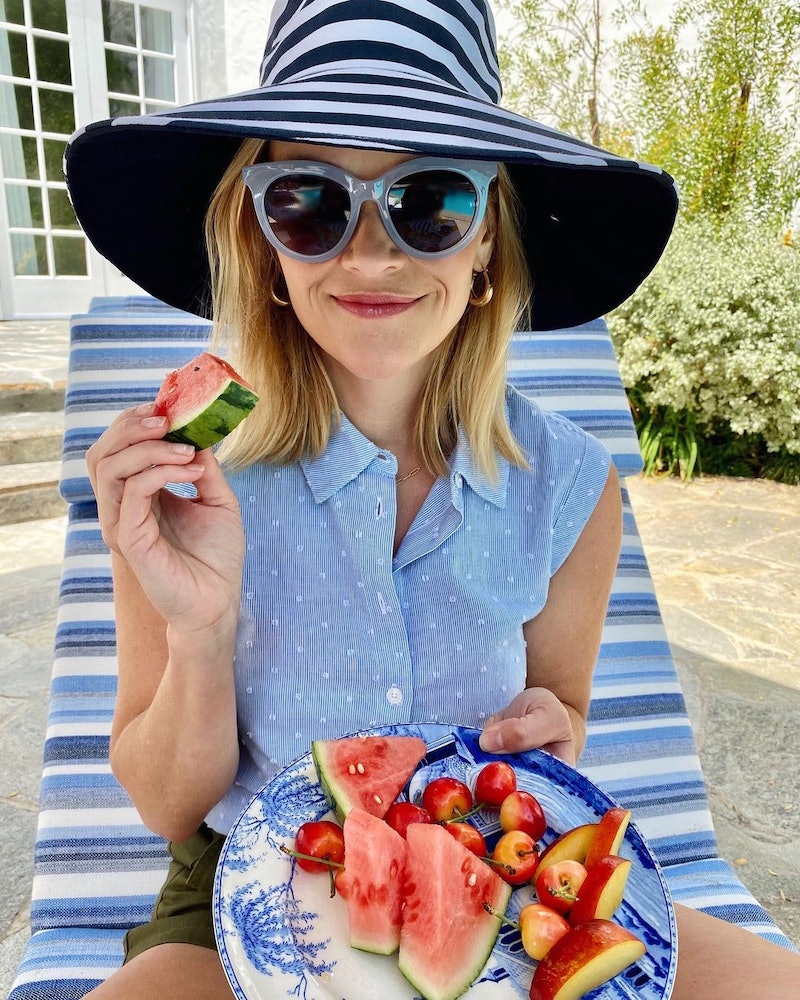 There’s not exactly a shortage of cooking shows on television these days; honestly, it’s likely that there are more now than ever before. But regardless of how much you love watching British bake-offs and Ina Garten sharing her latest recipe, sometimes it’s nice to be able to follow along with food content that’s a little more approachable. And while, yes, there’s always a wealth of videos on YouTube to dig through, that in itself can be overwhelming. Rather, the best place to turn when you’re just searching for something fun? Surprisingly, it’s the celebrities who cook on Instagram — and luckily, there are more than you’d expect.

Though a few probably came across your purview during the height of the pandemic’s banana-bread phase, stars have been sharing their recipes on the social media platform well before they were quarantined in their homes. Yet thanks to all their extra time these days, it seems they’re posting more than ever; in fact, many have even started (or ramped up) their own cooking series, regularly breaking down their favorite recipes in relatable videos.

It’s not always who you’d predict, either. Sure, Cameron Diaz, who started her own wine company and authored a book on health, makes sense — but actor Shay Mitchell, or Reese Witherspoon? They’re a little more surprising, which makes watching them create meals all the more fun. Ahead, these and a few more must-follows for the celebrity recipe inspo you didn’t know you needed.

Kaling is known for a lot of things — but what you may not be aware of is that she’s also a stellar cook. The comedian has long shared easy, fun, and indulgent recipes through Instagram videos, whether that be moose munch popcorn or banana ice cream. Give her a follow if you’re on the hunt for something simple; she mostly sticks to a no-frills approach that’s always refreshing.

Though Diaz got into the Instagram cooking game pretty recently, she’s quickly become a staple on the scene. As you probably could have guessed, she typically sticks to healthy(ish) recipes, though they’re always simple and quick. You’ll love her videos for lunch-time meals that are easy to whip up and light snacks that won’t leave you feeling tired and stuffed.

Cox is also a newcomer to the star-studded Instagram cooking club — but take it from someone who’s tried and loved her recipes that you should definitely give her a follow. So far, the Friends actor has shared a couple of light dinner recipes, including a baked halibut dish that’s now a staple in my household. And though there’s obviously no promise that her videos will continue to be a regular thing, it wouldn’t be surprising given the initial reception from her followers.

If there’s one celebrity cooking account you’re already familiar with, it’s probably Jennifer Garner’s. The actor has made it such a regular thing she even has her own hashtag — #PretendCookingShow — and she consistently posts hilarious snippets of her adventures whipping up fun recipes like bagel bread and biscotti. This isn’t the place to come if you’re looking for a trove of healthy dishes; however, if you want to laugh and indulge in some baked goods, it’s definitely the account for you.

If you’re a fan of traditional cooking shows, it’s time to start scrolling Mowry’s profile. The actor has been sharing her own food videos for a while now (which she’s recently dubbed “Cooking With Tam”), and usually posts long demonstrations of her adventures rather than short, edited snippets and written recipes. Her page has a wealth of options when it comes to hearty meals, so if you’re in the mood for something like lasagna or a fried chicken sandwich, it’s a great source.

For all things hacks, healthy, and social media-appropriate, Mitchell has you covered. Though the actor is another newcomer to posting Instagram recipes, lately she’s taken up sharing her healthy workarounds to junk food and fun cocktail recipes. It’s quite the mix, but always creative and hilarious, making Mitchell yet another must-watch to add to your list.

Though Witherspoon wouldn’t exactly be considered a regular on the celebrity cooking scene, she does pop in from time to time to share recipes she’s loving. Typically, she sticks to easy, healthy dishes — slow-cooker lentil soup and a green smoothie are just a few of the meals you can find on her Instagram.