It’s a mix made in heaven. 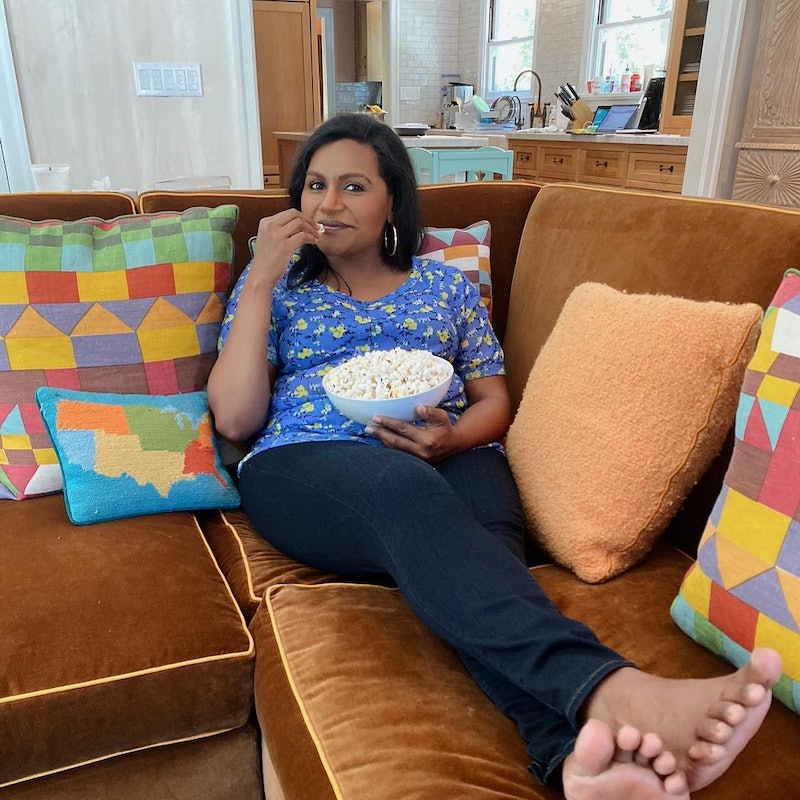 A bowl of popcorn is obviously an acceptable movie night snack; it’s an easy classic that, for most people, never gets old. But sometimes, even if you love a good pile of buttery kernels, you need a little something *more,* whether to satisfy your sweet tooth or just make the evening feel a little more special. And when that happens, you should turn to Mindy Kaling’s homemade moose munch recipe.

The comedian blessed the world with her go-to dessert in an IGTV tutorial on March 5, captioning the post with a foreboding statement: “An oddly stressful cooking outing for a very simple Moose Munch recipe. Enjoy!” But don’t let that scare you — as Kaling quickly went on to demonstrate, there is actually very little skill (and even fewer ingredients) involved in this treat.

Rather, it’s about as pared-down as it gets. As you may already know of this typical holiday snack, you really just need the basics: peanuts, chocolate chips, corn syrup (though as Kaling points out, that’s optional), brown sugar, butter, kernels, baking soda, and olive oil. Once you’ve assembled the ingredients, there are only a few steps (and a little stress) standing between you and the crunchy, gooey concoction.

Kaling explains that you should start by making your popcorn (she pops hers in a Great Jones Big Deal Stockpot rather than a microwave). After it’s finished, pour it onto a lined baking sheet and spread it out evenly so that it’s easily covered in the sauces. Then, make the caramel (according to Kaling, that’s the stressful part) and mix it into the popcorn, following that with a drizzle of the melted chocolate chips. Once you’ve let it set (as the actor explains, not completely necessary, but encouraged), you’re ready to kick back on the couch with a big bowl and dig in. “Perfectissimo,” Kaling notes.

Kaling may not be a chef by trade, but she’s no stranger to whipping up recipes for her followers; the 41-year-old is known for posting tutorials that are quick and fun, such as breakfast burritos, banana ice cream, and brownies. Considering her latest, it seems like this is a trend she’s going to continue — and after drooling over that caramel-covered popcorn, it’s safe to say we’re all hoping that’s the case. Until then, TZR has compiled a few cooking essentials to kick off your moose-munch making while you wait for her next video, ahead.