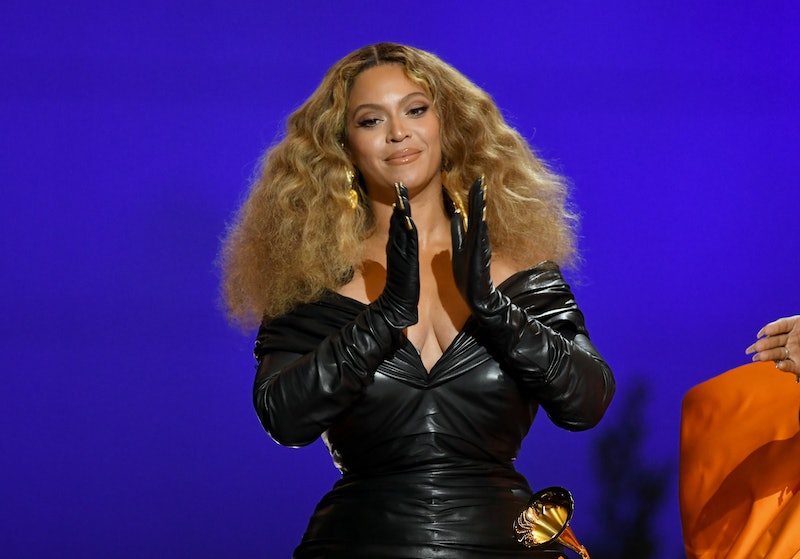 Beyoncé is the queen of unexpected moments: Unexpected album drops, unexpected pregnancy announcements, and of course unexpected awards show appearances — including most recently popping up at the 63rd Annual Grammy Awards despite the fact that it was rumored she would not be in attendance. And she’s also no stranger to exceeding everyone’s (already high) expectations in the fashion department. Case in point: Beyoncé’s 2021 Grammy Awards look, which consisted of a little black leather dress by Schiaparelli that was uniquely accessorized in quintessential Queen Bey style.

On Sunday night, the history-making artist (she broke the record for most Grammy wins as she casually took home a few more golden gramophones including Best Rap Song, Best Rap Performance, and Best Music Video, which she shared with daughter Blue Ivy) surprised many by showing up at the Grammy Awards show, and of course she didn’t fail to bring glamour to the occasion. Bey showed up in an LBD that was anything but basic. For one thing, the ruched, off-the-shoulder leather dress included attached gloves complete with gilded nails, but it was her sculptural Schiaparelli earrings that really stole the show and brought the look to a whole new, artistic level.

The collarbone-grazing gold jewelry looked just about as heavy as Beyoncé’s Grammy statues themselves, but of course she made them look totally effortless — as she does with everything from athleisure to wedding dresses. This styling makes trying the maximalist jewelry trend seem even more doable. To create your own version, throw on a dramatic pair with your favorite LBD, add sleek sunnies and a matching mask and voila. You, too, can channel boundary-breaking Beyoncé.