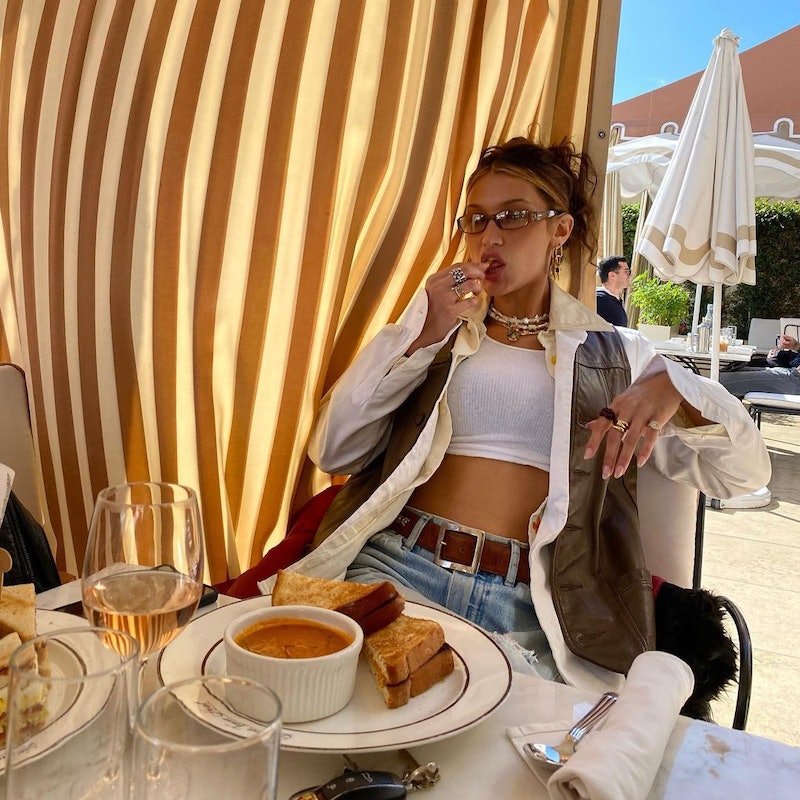 Even the most domestically inclined individuals are in need of some culinary inspiration from time to time, and social media is chock full of ideas for your next dish (viral feta pasta, et al) — and that includes the ones celebrities are cooking up. If you’re craving an indulgent meal for your next homemade lunch or dinner, Bella Hadid’s baked chicken shawarma is simple enough to recreate and it looks so satisfying.

If you’re keeping up with celeb recipes — like Reese Witherspoon’s soup or Mindy Kaling’s popcorn, for example — you probably already know that the Hadid sisters know their way around a kitchen, and frequently share some of their latest creations on Instagram, which is much appreciated by their hungry followers who are trying to partake in some culinary therapy these days. First there was Gigi’s spicy vodka pasta, then Bella showed off her ramen making skills, and now the latter whipped up her twist on a quintessential Middle Eastern street food, chicken shawarma, and it’s not as complicated at you might think.

According to some Instagram stories posted Wednesday night, Bella was doing a little improv in the kitchen when she created what would become her baked chicken shawarma sammy. The shots included showed her heavily seasoned chicken tenders as well as a handful of spice containers. It’s hard to tell exactly which the supermodel used in her recipe, but traditionally shawarma spice mixes consist of cumin, coriander, paprika, turmeric, cloves, nutmeg, allspice, and cinnamon.

Bella also whipped up a classic shawarma condiment, tzatziki, which is made up of yogurt, cucumber, dill, lemon, and garlic. Roasted red onions, fresh arugula, and garlic buttered pita bread were also components of the completed dish, but the cooking enthusiast also added a unique ingredient that looks to have made it over-the-top delicious: French fries. Bella baked off a sheet of hand cut russet potatoes until crispy and golden and slid those into the sandwich as well.

Want to make this street food inspired dish for dinner tonight? Check out Bella’s process (plus the finished product) ahead, or give this Half Baked Harvest version a try for something similar.