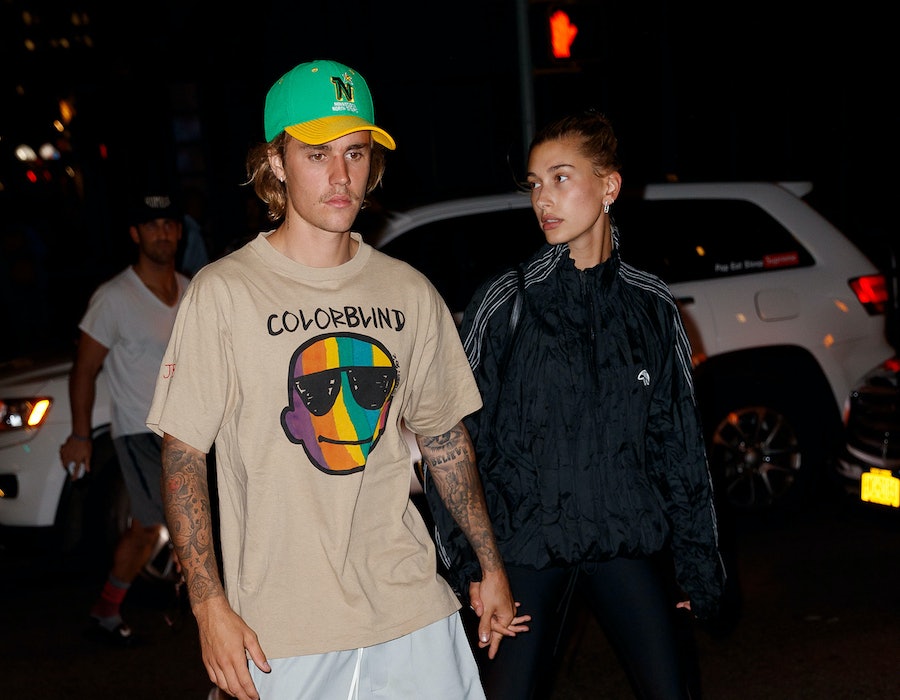 When it comes to celebrity couples, few are as in-step as the Biebers. In their two years of marriage, Bare Minerals ambassadress Hailey Bieber and megawatt singer-turned-designer Justin Bieber are known for two things. First, being completely inseparable; and second, appearing frequently in well-synced, androgynous outfits that rival each other's. Every time the pair is spotted around town or posted in one of Justin's cushy Instagrams, the masses are, once again left to delineate who nails the slouchy, unfussy look better. While it's true that no one pulls off unisex outfits like the Biebers can, the duo's sartorial formula is well worth examining more closely, should you and your beau be hoping to try the aesthetic yourselves.

In the past, Hailey has been famed for her flawless red carpet looks, including her slinky, all-pink Met Gala 2019 outfit. Over the years, especially during quarantine, Hailey leans into her menswear arsenal, repurposing tons of oversized tees for cool-girl wear. A frequent favorite of hers is, of course, Justin's unisex line, House of Drew — which offers scores of baggy trousers, camp-collared shirts, and tube socks for all to wear.

To get the full roundup of the duo's best unisex ensembles, continue ahead.

Justin has long been a fan of iconic Italian label, FIORUCCI — and this time, he's sharing one of his key staples with Hailey. Within days of each other, the two posted up in the same pink tie dye bucket hat, which Joe Jonas has also been known to step out in. While both sweatshirts worn by the Biebers are currently not available, there are similar styles in-stock on its site now.

Justin and Eilish's co-fandom has been public for some time, and he showed his support with two matching graphic hoodies in a 2020 Instagram post. To grab the very same hoodies from the songstress (who also loves a bold, gender-neutral look), shop ahead.

For a day in the stands with Hailey, Justin wore an oversized Toronto Maple Leafs hockey jersey with a pair of khaki cargo pants and sneakers. Hailey reached for a mustard-hued, waist-cinched windbreaker, white velcro shoes and a pair of leather pants. Since the occasion, she's called on Justin's spirited jersey countless times, styling with a pair of denim shorts and platform boots.

In a surprise performance for his wife at Buckingham Palace in 2018, Justin spontaneously stopped to serenade her — a moment that the pair kept it ultra-cozy for. Justin wore a tie-dyed hoodie with sweat shorts and Off-White Nike sneakers while Hailey wore a matching Cherry LA sweat set with gray ankle socks and black sneakers. While the exact set is sold out, the brand carries a similar style that donates proceeds to Feeding America.

The Biebers stepped out in two baggy, demure looks — both of which were completed by a dark baseball cap and chunky eyewear. While Justin wore a letterman jacket over his House of Drew sweats, Hailey went for the leather trench coat trend, styling it with a pair of darted jeans and white sneakers.