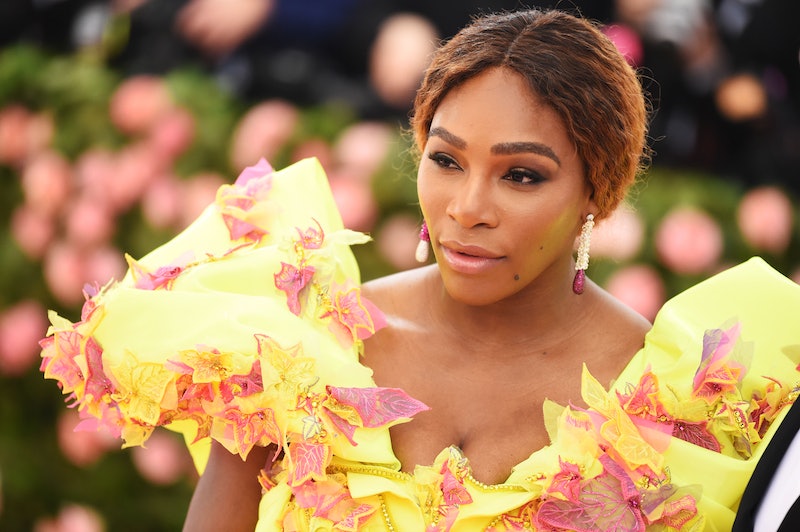 Anna Wintour said during an interview with the Today Show on Fri. that Mon. evening's red carpet "might not be red" at all. Now, you can see that the steps of the Met look like they're made of bubblegum and a shocking number of guests coordinated with the unexpected shade, too. Apparently, the key to nailing the 2019 Met Gala's "Camp" theme was pink.

This year's Met Gala was centered around a word that many had never even heard (at least in the context of fashion), and that's camp. In Susan Sontag's 1964 seminal essay, "Notes on Camp," on which the 2019 Met Gala was based, the author wrote that she is almost as offended by camp as she is drawn to it.

Camp has been called kitschy and flamboyant, but Sontag describes it primarily as being esoteric. Perhaps that's why the whole event is dripping in pink.

From the carpet and the cotton-candy interior decorations, featuring hundreds of flamingos, to the A-list attendees themselves, everything was pink. Perhaps a coincidence, the pink triangle has been a symbol of LGBT pride for decades, which aligns perfectly with Sontag's essay, initially titled "Notes on Homosexuality."

Lady Gaga, Rachel Brosnahan, and the queen of the Met Gala, Anna Wintour, herself, all played along with the color scheme. Ahead, the best pink looks of the night.

One of the first to step onto the pink carpet was longtime chair of the event and Vogue editor-in-chief Anna Wintour. Her floral-embellished Chanel gown suited her chic style while a bold feather shawl kept the look on-theme.

The epitome of camp, Lady Gaga was a perfect pick to co-chair this year's Met Gala. In one of her biggest fashion moments yet (and that's saying a lot, as you know), the singer changed outfits several times without ever even leaving the pink carpet. She showed up in a gigantic fuchsia Brandon Maxwell gown and revealed a hot-pink slip dress moments later.

Fellow co-chair Serena Williams incorporated the color into her canary-yellow Versace dress with pretty pink leaves and jewelry. She paired the couture look with low-key Nikes, staying true to her style.

The Marvelous Mrs. Maisel actor went all out with bows, ruffles, roses, and the works, courtesy of a stunning tiered gown by Erdem.

Baldwin's version of a pink gown was a form-fitting, open-back turtleneck dress by Alexander Wang. Though not the biggest ballgown of the night, it could be a contender for the sparkliest.