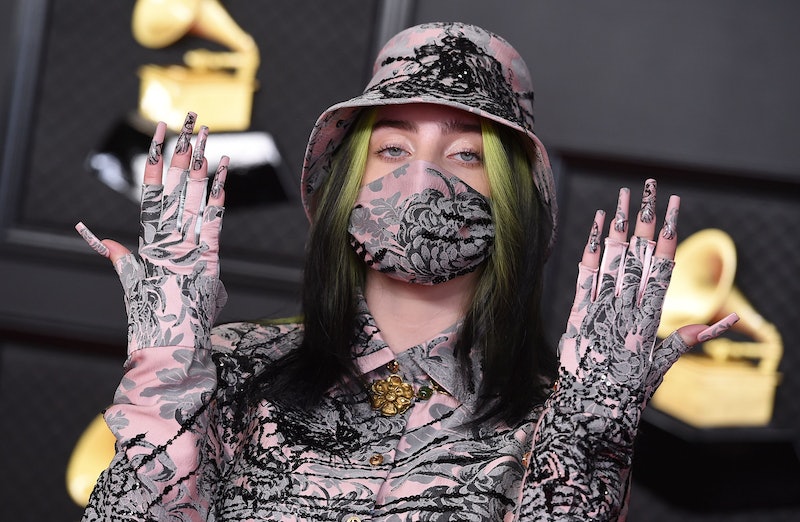 Besides the memorable musical performances, you probably knew the one thing you could count on while watching the 63rd annual Grammy Awards was a slew of super-creative looks — from head to toe. And this year not a single detail seemed to be overlooked, including the 2021 Grammy Awards nail looks. Arguably more so than other major awards shows, stars traditionally use this occasion to express themselves with their manicures, and examples of that expression ran the gamut from minimalist to maximalist.

Some of the biggest nail trends were represented in the edgy and glamorous beauty looks worn by the nominated and performing artists. For example, shimmering hues are predicted to be huge this year, and a perfect example of how to try this one for your next spring manicure can be seen on Lizzo. In blush and champagne tones, her nails shined with a pearlescent glow.

Graphic designs are another huge trend, and Doja Cat’s tips proved the point — literally. Her nail artist used lines and dots — each nail slightly different than the other, but all in the same color family as her dramatic leather and feather ensemble. On that note, matchy/monochromatic manicures seemed to be the one nail memo that every attendee got this year: From Billie Eilish’s all-over Gucci print to Phoebe Bridgers’ chic black mani that perfectly complemented her embellished skeleton gown.

Need a little inspiration for your next visit to the salon (or DIY beauty day)? Read ahead for how the 2021 Grammy’s most stylish expressed themselves through nail art.

Eilish nailed (pun intended) the logomania look in a pink and black Gucci print that included her tips.

Cyrus’ ivory Schiaparelli gown was an ethereal dream, but her super-long, pointed nails in a matching hue added to the edge she’s synonymous with.

Purple hues were all over H.E.R. — from her tinted sunnies to her embellished nails by artist Chaun.

Harry has proven himself to be a long-time appreciator of nail art, and this year’s Grammy Awards was no exception. As he posed with Lizzo post picking up his Best Pop Solo award, you could catch a glimpse of his multi-colored manicure.

The “Levitating” singer’s embellished manicure was matched perfectly to her beaded, butterfly-inspired gown.