One woman’s journey to “I do.” 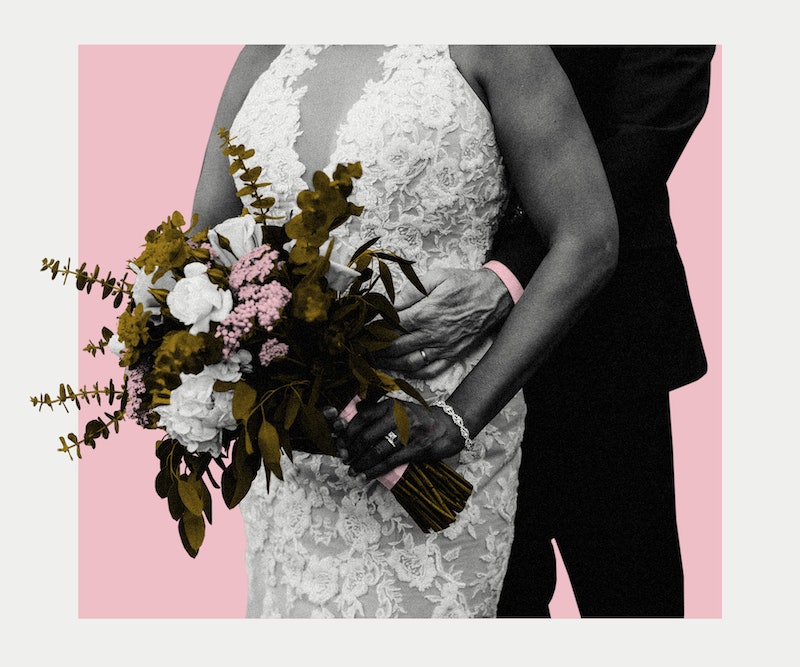 Treva Brandon Scharf’s wedding to husband Robby Scharf was a special one. Perhaps to an unknowing bystander, it would’ve appeared to be like any other beautifully planned formal affair, and in a lot of ways it was. The venue was a luxurious golf course in Toluca Lake, California, where a traditional chuppah was installed for the ceremony. The bride walked down the aisle in a vintage Bob Mackie gown to a saxophone playing a soulful rendition of the classic “Wedding March.” However, what likely made the event feel particularly memorable was that it marked the first marriage for the bride and groom, who were 51 and 57, respectively, at the time. “Guests were in such disbelief that these two people who had never been married were able to pull it off,” recalls Scharf of the day, which took place almost exactly seven years ago to the day. “There was so much love and a lot of pinching yourself going on. I was really present for that.”

And while the courtship itself was a relative whirlwind that took all of six months to reach engagement status, Scharf explains finding her life partner was a long time coming. “I should preface everything by saying I’m a bit of a late bloomer,” says the life coach, podcast host, and dating expert to TZR. “So everything in life happens to me late or later.” For Scharf, who says she’s not a planner by nature, personally or professionally, her journey to “I do” came as a surprise — even to her.

“I was always an independent, free-spirited young woman who, in her 20s and 30s, would not, could not settle down,” she explains. “I was not ready. That’s not to say I didn’t have boyfriends and relationships. I did. I had many I could have even married. But I was a bit of a runaway girlfriend. I fell in love. I had loved. I was loved. But I wasn’t ready to let go.”

Hopkins-trained psychiatrist Dr. Leela Magavi explains that this story is not an uncommon one for individuals who choose to marry in their 40s and 50s. “Many of my patients focus on their careers and financial stability earlier in life, and subsequently, find it enjoyable to date similarly motivated individuals, [earlier in life]” she says to TZR via email. “I have many patients who are passionate about traveling, partaking in disparate hobbies or learning different recipes; they enjoy learning about themselves and spending time with friends and family members rather than dating or looking for a romantic partner.”

Scharf explains her particular journey was more about timing, or lack thereof in her case. “Some people go with the flow and some people have the master plan and they know they’re going to law school or they know they want to be a doctor,” she explains. “I started off in advertising as a copywriter [in my 20s], and I loved it but I didn’t have a goal. There was an element of spontaneity of how I lived and the choices I made.”

It wasn’t until Scharf hit her 40s that she felt a distinct priority shift. “My biological clock went off kind of late,” she says. “It went off at 42 or 43 and that’s when I started looking for a husband. That’s when I thought, I better get on it. And then my 40s were a nightmare.” The life coach explains that this sudden sense of urgency came from a deep desire to have children, a need that had always existed, but that she never put a timeline on. “I never had a sense of time in my 20s and 30s,” she explains. “I really didn’t have any awareness or a bigger plan for myself. I didn’t live with intention or date with intention.”

To be clear, the dating expert says she doesn’t question or regret the timing in which she met and married her husband. “I could not have gotten married one minute before I did,” Scharf says. “I mean I guess I could have but it would’ve been the wrong person.” Indeed, the life coach explains the people she was meeting and considering were either “still married, separated, or freshly divorced and didn’t want to jump back into marriage, especially with a woman who had never been married and wanted kids.”

And though she’s not losing sleep over the ones that got away, the one pain point that Scharf has involves her prolonged hold on having children, a journey she eventually embarked on solo in her 40s. “I can’t kick myself too hard because egg freezing wasn’t really a thing when I was in my 30s, like it is now,” she says. “I envy women who have the ability to freeze their eggs because I didn’t, and that’s one thing I regret.” She did, however, dedicate about four years to exploring other fertility options, with disappointing results. “I was full-court press,” she explains. “I gave it all my money, my body, my time. And I finally thought, I am obviously not meant to be a mom, and I just put it to bed. I feel good about my effort. I really went for it.”

After years of navigating this 10-year span of “rough road,” Scharf found herself at the cusp of a new decade of life and in a whole new mindset, to boot. “I was about to turn 50, and I decided, Well, I’m not getting married, obviously. So, I better get on with my life and start to accept and make peace with being single forever. And I did.” To celebrate this new chapter and outlook, she threw herself a lavish party and invited “half of Facebook,” including a man she had met on the social platform, music producer Robby Scharf. The two hit it off at her 50th soirée, went on a date the following week, and were engaged six months later. The rest, as they say, is history.

Dr. Magavi explains that individuals looking for love in their 40s an 50s tend to be more intentional and focused on what they want and need, which is why things can often progress more quickly. “They tend to know what their core values are, and what they are and are not seeking in a partner,” says Dr. Magavi. “This is pivotal as this form of clarity and introspection helps create a strong foundation for a relationship [...] They prioritize the physical and sexual connection, as they certainly should, but tend to prioritize the emotional and intellectual connection more than younger individuals.”

On reflecting on her relationship journey, Scharf says she looks back at her past partners and experiences with gratitude, as she feels they were all stepping stones to her now husband of seven years. “They led me to him — every one of them,” she says. “Some of them I cursed at the time, but now I look back and I thank them profusely. They made me grow. They refined me, strengthened me. They made me smarter. All those breakups and heartache gave me clarity.”

Finding her life partner in her 50s also felt like a reset of sorts. Scharf explains that even seven years later, the relationship still feels fresh. “This is my longest-lasting relationship and the first one I ever lived with,” she says. “I’m used to a solitary life and he moved into my place with me. I’m telling you, it never stops amazing me. There’s this creature that lives in my home — this beautiful, loving, incredible creature I’m constantly fascinated with. There’s always new things I’m discovering. When you get married for the first time at 51, it never gets old. I will never tire of this person because it took so long to have it.”