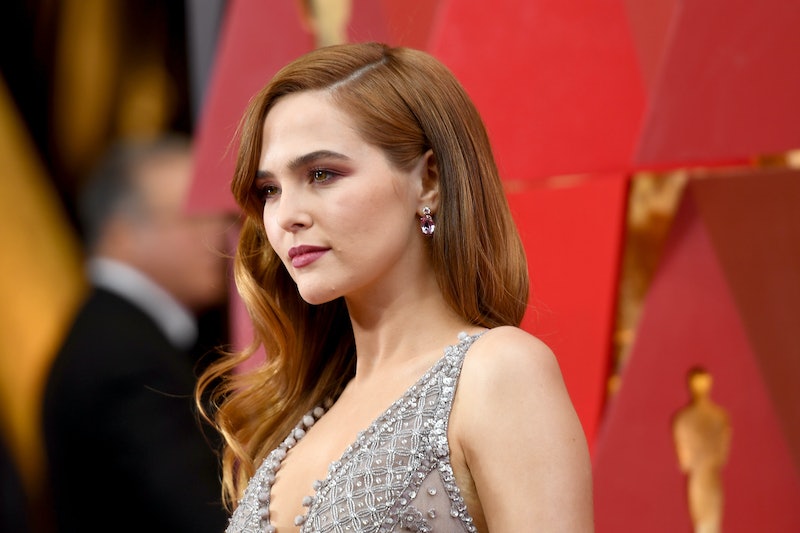 Fashion month has come and gone in the blink of an eye. Four weeks of nonstop style inspiration, both on and off the runway, is certainly a lot to take in, and when it, well, ends, a sort of void can settle in. The good news, though? Press tours are still a regular thing, and if you follow these jam-packed media rounds closely, you'll know they've turned into mini fashion shows because said actors are known to make multiple outfit changes in a single day. Zoey Deutch's press tour style, for example, kicked off with a mood-boosting look guaranteed to cure your post-fashion month blues — and she just successfully introduced one of fall 2019's biggest color trends, too.

It was near impossible to miss Deutch on the streets of the Big Apple in the early hours of Thurs., as she served up a hefty dose of tangy goodness that surely cheered up fans and onlookers alike. On Oct. 3, the actor was photographed en route to an appearance on the Today Show, where she chatted all-things The Politician, a Netflix original in which she stars alongside Gwyneth Paltrow and Benn Platt.

Deutch regularly sports vivid hues, but there was something about her most recent on-duty ensemble that felt incredibly fresh and fun. The actor commanded all the attention as she arrived on set in a clementine-colored two-piece suit that was unlike anything you've seen before. The color was unexpected, sure, but the set's silhouette is what made it utterly intriguing.

Deutch's suit was plucked straight from Carolina Herrera's Resort 2020 collection, a range that was inspired by a Latin holiday and includes pieces that exude sunshine, laughter, dancing, and fun.

The set consisted of a boxy blazer with sharp, bold shoulders and statement buttons and a pair of trousers that actually look like a skirt upon first glance — yep, they're that flowy and airy.

Considering the suit was already so statement-making on its own, both in terms of its color and its silhouette, it was a smart style move to keep the rest of the outfit additions simple and understated. A pair of nude pumps and dangling silver earrings rounded out the ensemble with ease.

You won't be able to get your hands on Deutch's exact Carolina Herrera suit, but the market is chock-full of plenty of other unique tangerine-hued finds that you won't be able to say no to. Shop The Zoe Report's favorites, below.