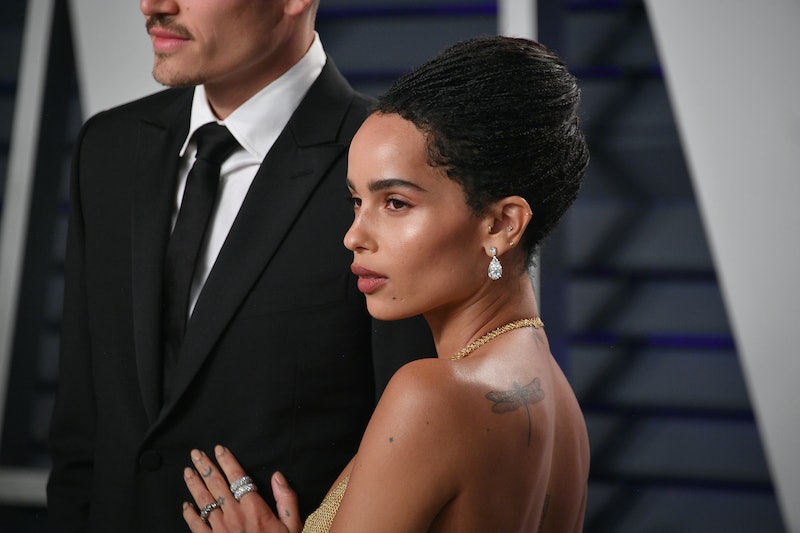 Today was certainly the day for French weddings. In addition to the nuptials of Sophie Turner and Joe Jonas, Zoë Kravitz also celebrated her own wedding at the Paris home of her father Lenny Kravitz. And to say it was a star-studded affair would be an understatement.

The Big Little Lies star and her husband Karl Glusman, who've been linked for three years and engaged since February of 2018, were surrounded by quite a few celeb friends at the romantic French ceremony. Attendees of the wedding included Kravitz's BLL co-stars Reese Witherspoon, Laura Dern, and Shailene Woodley as well as the actor's famous family. In addition to father Lenny, mother Lisa Bonet and step-father Jason Momoa were also present. And just when you though the guest list couldn't get any more fabulous, try adding Cara Delevingne, Ashley Benson, and Denzel Washington to the mix.

While images of the bride have yet to be released, judging from her look at the rehearsal dinner the day prior, it's safe to assume her wedding look was to die for. Kravitz went with white Danielle Frankel bike shorts and a matching bandeau top under a white beaded dress for her pre-wedding affair, at which guests dined on lobster millefeuille and tuna tartare, according to People.

Although coverage of the actual wedding ceremony has been sparse, here's the lowdown on the venue. Kravitz's French mansion is a three-story, eight-bedroom home with surrounding gardens and traditional 18th-century architecture. According to People, the home was once owned by a government official (although it's been in Lenny's possession for some 13 years). Apparently, the house's wine cellar has been converted into a speakeasy stocked with bottles of Dom-Perignon. Because, why not?

As you anxiously await for more details of Kravtiz's epic day to surface, feast your eyes on the magic that was the rehearsal dinner. Between Witherspoon's floral violet midi dress and Dern's one-shoulder masterpiece, there's all manner of inspiration for summer's wedding circuit. Don't worry, dresses weren't the only thing on the menu for this glamorous affair. Delevingne's yellow pinstriped suit is about as chic as they come. Oh, and if you're in need of some accessories for the warmer months, take a page from Woodley's book and pair a black fedora with your formal wear.

Ahead, take a look at some of the most glamorous looks from Kravitz's wedding weekend. And be sure to stay tuned, as more images are bound to come in and keep your sartorial inspiration flowing.