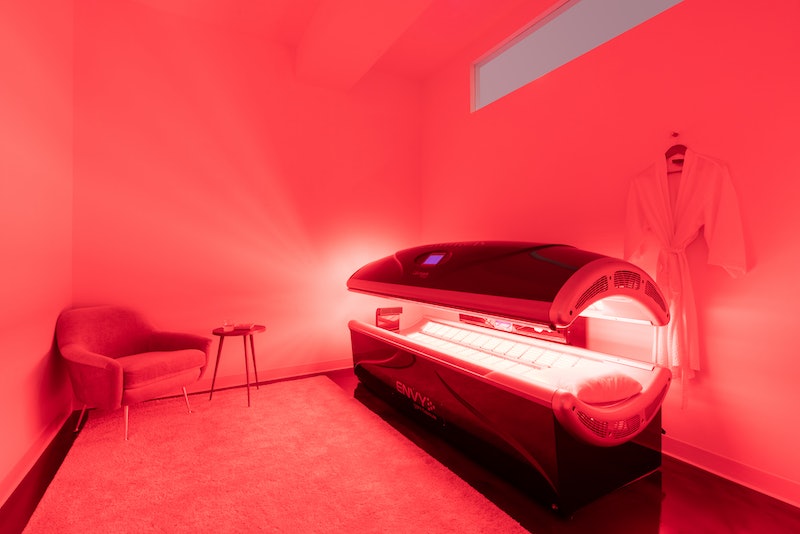 Last year, while researching a story on LED light masks, I developed a bit of an obsession. The technology fascinated me — dermatologists say the little red and blue bulbs have the power to kill acne-causing bacteria and stimulate collagen production — and I couldn’t resist investing in my own at-home device. Six months and $249 later, I swear by the power of LED (which stands for Light Emitting Diode, by the way) for clearer, plumper skin.

"We recommend LED light therapy, especially to clients who get a facial with extractions," the Heyday Tribeca Skin Therapist Team tells TZR. "Blue LED light helps to calm down redness, inflammation, irritation, and is super soothing for the skin. It also kills bacteria, helping to both prevent breakouts and heal the ones that already exist. Red LED light stimulates collagen production. You'll notice the benefits and glow after the treatment."

I’m such a fan that I’m constantly looking into new innovations in the space, and the skincare and wellness industries have been delivering lately. These days, LED therapy extends well past the neck; LightStim (the makers of my beloved handheld light therapy tool) recently introduced a full-body LED bed to the Neiman Marcus Spa in New York City that not only boosts skin health, but alleviates aches and pains, per the FDA. LED light also has a trendy new cousin — infrared light — which experts believe has the potential to “detox” the body and accelerate the skin’s wound-healing response. That’s probably why it’s popping up everywhere, from aestheticians’ offices to spa saunas to at-home “sweat beds.” (Yes, I bought one. Yes, I love it.)

Ahead, four light therapy trends to try if you love your LED device as much as I do.

Fans of at-home LED treatments can take things up a notch by getting a LED facial in an aesthetician's or dermatologist’s office. “Personal devices, in order to be safe, are not designed to be as strong as those we carry in the office,” Dr. Neil Sadick, a dermatologist based in Manhattan, tells The Zoe Report. In other words: An in-office treatment will give you better results. As for what results, exactly? “Blue and red LED light has been shown to be effective in killing bacteria and reducing inflammation respectively,” the dermatologist says. “In that regard, they are efficacious for treating acne and excess redness.” You can also expect to see a bump in collagen production and thus, a firmer face.

“I have been a huge fan of LED professional versions in my facial treatments for years,” Angela Caglia, an aesthetician who works with celebs like Minnie Driver, tells TZR. “I love the backstory on it: It was invented by NASA over 20 years ago for astronauts. When they were up in space and wounded, this light would help it heal faster. They found out it was going so deep that it was actually stimulating collagen synthesis, and the beauty business brought it to market about 10 years ago.” So, yeah, that thing is going to do wonders for your skin at professional levels.

Caglia offers LED facials in her Los Angeles office, as does celebrity aesthetician Joanna Vargas — but as LED becomes more mainstream, you can probably find an in-office option wherever you live. (It’s worth noting that consistency is key here — you’ll see best results if you go at least once a month.)

One innovation that hasn’t quite made it big yet is the LED bed — but if you live on either coast (or are planning to visit), you’re in luck. Vargas famously created her own full-body LED bed for her LA headquarters, which she calls The Time Machine. “Once a client goes through a series of LED light bed therapy treatments, results can include lessening of cellulite, fading of stretch marks, [and] smoother, younger looking skin,” Vargas wrote on her site. “This will also result in even-toned skin — all for spending a relaxing 20 to 30 minutes in what some call the ‘Sleeping Beauty’ treatment.’”

New Yorkers can head to the recently-unveiled LightStim LED Bed at the Neiman Marcus Spa to experience the lights in their full (body) glory. The brand notes the machine is also FDA-approved to temporarily treat muscle and joint pain, since it’s been shown to increase circulation and, as a result, relax tension. Devotees can purchase the bed for at-home use… but it’ll cost you a cool $65,000.

Related to LED light, infrared light is a form of electromagnetic radiation. “It has longer wavelengths than those of visible light — it sits next to red light on the spectrum — so it’s invisible to the human eye,” Dr. Sejal Shah of SmarterSkin Dermatology tells The Zoe Report. “It has been shown to stimulate collagen and elastin production and accelerate wound healing.” Infrared lights already feature in some of your favorite at-home skincare devices; like the MZ SKIN Light-Therapy Golden Facial Treatment Device, which boasts red, blue, and yellow LED light as well as infrared light.

The most popular way to get a fix of the good stuff, though, is via an infrared sauna — AKA, a sweat room that bathes your body in IR radiation. (That admittedly sounds terrifying, but experts agree this kind of radiation is safe.) “Some studies have found that infrared treatments can be effective and safe methods for remodeling the skin, improving overall appearance, and treating signs of photo-aged skin,” Dr. Josh Axe, the founder of Ancient Nutrition and author of the best-selling book Keto Diet, tells The Zoe Report. “IR radiation can produce lasting changes in skin health and appearance because it has a temperature-independent stimulatory effect on the proliferation of human fibroblasts and collagen. In other words, it goes below the surface of the skin to actually alter how your body produces new skin cells, without using UV light.”

Some skin-centric results you may see from consistent infrared sauna sessions include: A boost in collagen and elastin, fewer wrinkles, less acne (“since it can positively impact sebum production and reduce inflammation,” Dr. Axe says), and management of chronic conditions like psoriasis. “IR is also a painless process and doesn’t cause burning or scarring in the vast majority of cases,” he adds.

Plenty of spas around the country feature infrared saunas — my personal favorites in L.A. include The Raven Spa in Santa Monica, Wi Spa in Koreatown, and Sweatheory in Hollywood. Bonus: You get a good sweat out of it, which experts say has its own set of skin benefits.

Why limit all that magic to your face? Infrared beds — and even at-home blankets — are having a moment now, too, as evidenced by treatment centers like Shape House in California and New York and SaunaBar in Los Angeles. In both instances, your body is exposed to infrared light and temperatures up to 160 degrees. (Your head is conveniently left out of the bed so you can, you know, breathe.)

“Some research suggests that you’ll get better results from infrared treatments if you cover more surface area of your body, especially if using a powerful, high-quality device that delivers uniform and even wavelengths to most of your skin,” Dr. Axe explains. Roasting in an infrared bed supposedly delivers increased energy levels, improved focus, less inflammation and pain, better sleep, and yes, healthier skin, according to the natural medicine doctor. It also stimulates lymphatic drainage, which is why some say infrared is like a “detox,” minus the green juice.

You don’t have to book an expensive treatment at a spa to experience the beauty of an infrared bed, either. Brands like HigherDOSE, which has an in-person location in Brooklyn, offer personal sweat beds for in-home use. A high-quality option can run anywhere from $500 - $1,000 — but if you want to get your sweat on daily (which I do!), it pays for itself in less than a month.