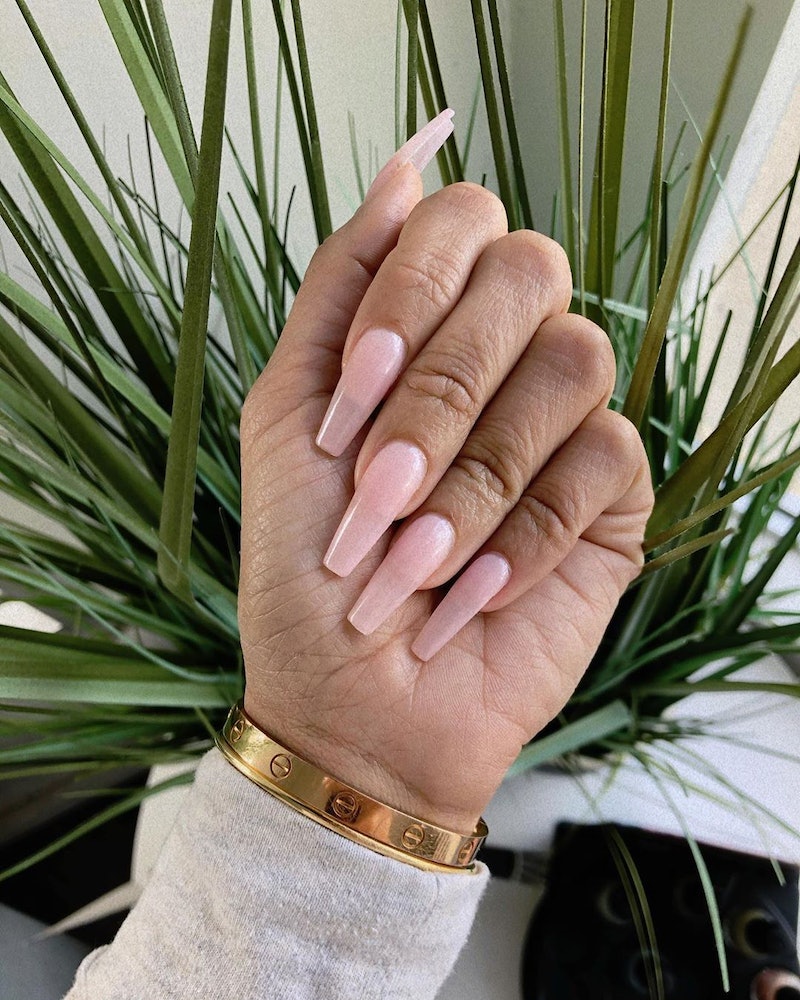 If you aren't blessed with naturally long and strong nails, then you're already aware that extension systems including acrylics and press-ons are the easiest way to give you that added ~drama~ on your hands. But in return, those methods can weaken natural nails due to improper application, harsh chemicals, and intense drilling caused by the removal process. But these days, nail lovers are opting for an innovative new gel extension system called Aprés Gel-X, which gives length without sacrificing the health of your nails underneath.

Aprés Gel-X Nails: What Are They?

It's important to mention that the fairly-new process — created in 2017 — is the world's first soft-gel nail extension system. In short, think of Aprés as a sophisticated press-on made completely out of gel. Unlike acrylic, which is an extension solely at the tip, Aprés covers the entire nail bed, fostering a safer space for natural nail growth with far less trauma.

Aprés Gel-X Nails: Are They Better Than Acrylic?

Aside from the easy removal process (Aprés soaks off with acetone), there's no hard drilling, so nail beds are not irrevocably damaged before or after treatment. However, it's the health benefits that have even the strictest wellness lovers changing their minds about nail extensions. "We all know the signature nail salon smell," Kia Stewart, celebrity nail artist and founder of Salon 1209 in New York City, tells TZR. "It’s universal. Many people are not aware of the toxins that these environments produce." Those toxins Stewart is referring are formaldehyde and casting resins, found in abundance in acrylic powder. "A key component for me to align with Aprés was its ethical approach. Safe nail care for the technician as well as the client is huge. The extra bonus is it’s a soak-off system, so it aligns with less manipulation to the natural nail. That’s a top tier priority in my book, since my focus is on maintaining nail health."

And Draya Michele, actress and founder of Los Angeles nail bar Brand Nails, agrees. She's converted hundreds of her clients to Aprés from acrylic, creating a safer space for anyone who steps foot in the nail salon. "It's safer for everyone, including the nail tech," she says. "It uses less drills and makes less dust which in turn is better for the nail tech, the other customers in the shop, and for the client."

Aprés Gel-X Nails: Is It For At-Home Use?

While the extensions present as press-ons, at-home use can be a little trickier, especially if you want the nails to last. Aprés doesn't adhere simply from nail glue. Instead, it's applied with a polish adhesive that must be cured with a blue light. "I wouldn’t advise most professional industry products to my clients, but this is safe from my experience for at home nail care and pretty simple maintaining upkeep," Stewart says. However, with at-home application comes a shift in longevity. "If you go to a salon or licensed professional, Aprés can last as long as three to four weeks," she says. "If we look at in-home services done by the consumer, it can be subjective."

Another concern is sanitation, which is why Michele is an advocate for exclusive salon use. "When it comes to cleanliness and proper preparation of the natural nail, you want to make sure sanitary practices regarding workspace and tools are up to standards as far as cleaned and disinfected. In a salon space, it's a safer environment and there are certain rules are enforced regarding sanitation."

Aprés Gel-X Nails: Can I Still Achieve The Length Of Acrylics?

Absolutely. "They offer every shape and length under the sun," Michele says. "We’ve been working Aprés since the beginning, so we’ve seen when they had limited shapes and now we see they have everything. They even have extensions with cut-outs in the nails, the brand is constantly evolving."

Aprés Gel-X Nails: Who Is It Best For?

Stewart only suggests the system to those who are willing to truly prioritize nail health. "I think if you are going to a salon, the best candidate is someone looking for a partnership for a nail journey," she says. "Aprés is a system so it has to be maintained, and is an investment (whereas acrylic sets can start as low as $25, an Aprés set has an average starting rate of $75). Many people have transitioned their mindset of nail care by wearing Aprés."

And when it comes to the starting length of your nails, nail biters, you may want to take it easy for awhile. "The people I don’t necessarily suggest it for are nail biters and people who have short to the skin finger nails," she says. "The extension does need something to stick to, unlike acrylic tips which can start with any base."