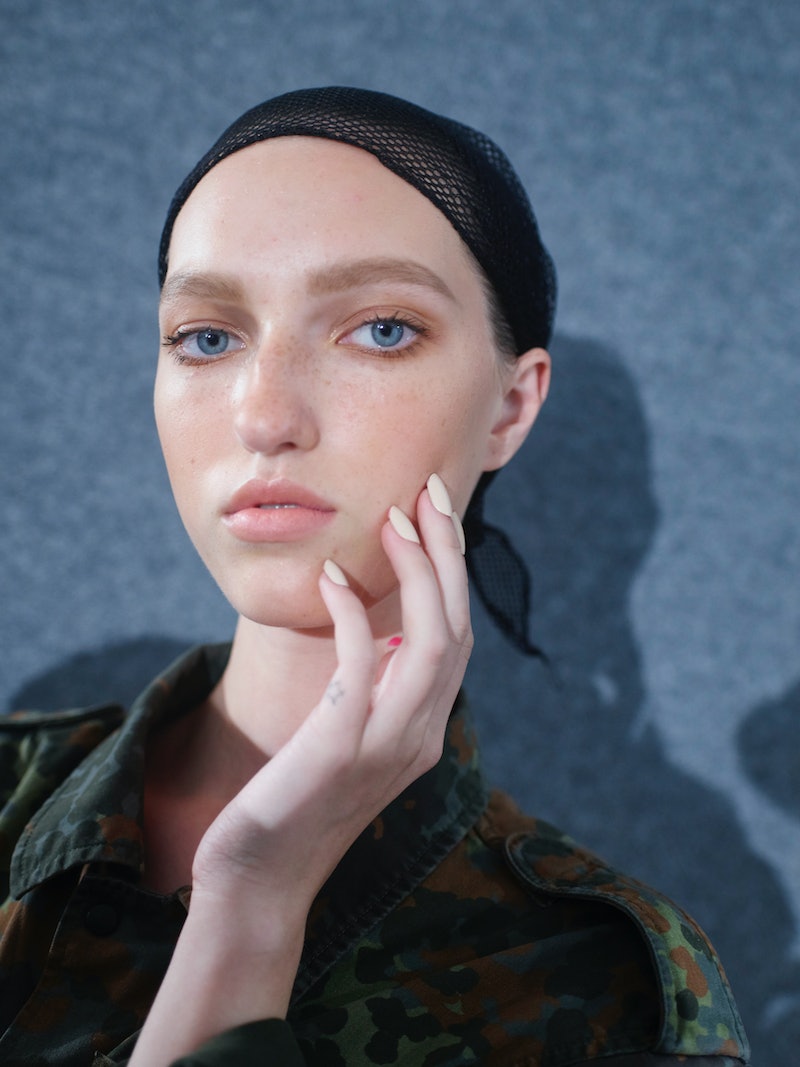 I’ve never been the girl with hand model-worthy nail beds. I’ve been a biter since I can remember, and my ragged cuticles and short fingernails always bothered me. Like many others in my position, I figured that acrylics were my best bet at good nails. I loved them: The long, almond shape made me feel like a Kardashian, and the thickness of the plastic prevented me from nibbling. But then, reality set in. I got fill after fill until they finally fell off… resulting in thin, brittle, acrylic-damaged nails underneath. I’m finally on the path to nail rehab for my natural nails, and with some expert input from the pros, I’ve made some much-needed leeway.

“The only way to nurse damaged nails back to health is to give them a break from whatever caused damage in the first place,” Mazz Hanna, a celebrity nail artist who works with Julia Roberts and Selma Blair, tells The Zoe Report. “If you've ripped off your gel one too many times, take a break from the gel.” In my case, that means letting go of my beloved acrylics and giving my stubby lil’ nails some extra love.

That’s not to say that all nails that’ve been through the gel or acrylic process need repair, though. “The telltale sign of damaged nails are when they become thin and brittle and they break off before any growth can accumulate,” Hanna says. “Ridges are another way to tell if there has been damage to the nail plate.”

If you tend to get your fake nails refilled instead of soaked off and reapplied, you likely have some ridges — i.e., uneven texture on the surface of your natural nail. “Sometimes nail techs are pressed for time and end up grinding down the natural nail before refilling acrylics,” Hanna explains. “This is what can lead to ridges.” I’ve got about four fills’ worth of ridges to contend with, so I’m treating my nails with Dermelect’s Makeover Ridge Filler to camouflage the bumpy surface. It’s a simple, light pink polish infused with protein (aka, what nails are made of) to fill in dips while simultaneously strengthening, and I’m loving how it smooths things over in a totally inconspicuous way.

“When gels or acrylics are removed, sometimes they aren't soaked for long enough and as a result, a layer of nail is scraped off with product,” Hanna says. This usually makes nails thin, bendy, and prone to breakage — three of my top concerns. Of course, I use the prerequisite clear strengthening top coat (Sally Hansen Mega Strength Hardener is my personal fave), but the product that’s made the most difference thus far is actually a nail serum — kind of like the vitamin and antioxidant-packed serums you use on your face, but for nails instead. I slather on a bit of Sally Hansen’s Hard As Nails Vitamin Strength Serum, fortified with vitamins A, C, and E, every day and I’m dealing with fewer broken nails as a result.

“Another important part of healthy nails is maniacal application of cuticle oil,” Hanna says. Think of cuticles like the scalp — this is the bedrock of nail growth. Just like healthy hair can only grow out of a healthy scalp, strong nails can only grow out of cared-for cuticles. I swear by Mazz Hanna’s Amethyst Cuticle Oil for three reasons: It works (thanks to conditioning hemp seed oil), it smells good (care of lavender and geranium essential oils), and its rollerball applicator is actually an amethyst crystal, “which can aid in fighting the urge to pick or bite nails and cuticles,” Hanna tells me. I’m a believer.

While the nail-repairing game requires a lot of patience, that doesn't mean you have to skip out on manicures in the meantime. According to the manicurist, natural-looking nails are still trending. “A great way to have some fun while waiting for nails to grow out is with negative space manicures,” she tells TZR. “This allows you to use a nourishing system like Zoya Naked Manicure, but add some fun art on top.” She suggests using a bobby pin to create tiny polka dots around the cuticle for a style that’s pretty and practical.

One big lesson I’ve learned is that it’s important to skip the acetone nail polish remover when your nails are weak. I’ve developed an obsession with Tenoverten’s rose-scented, acetone-free liquid remover for this reason. It actually has horsetail leaf extract, vitamin E, and aloe inside — so instead of stripping your nails (like most removers), it actually strengthens them.

Ahead, every nail-nourishing essential you need to bring brittle, broken nails back to life.

This kit from Dermelect includes a base coat and high-shine topcoat, both infused with peptides (the building blocks of protein) to help build up nail strength.

If your nails are brittle and breaking, just swipe on a coat of this strengthening polish.

“I'm obsessed with my certified organic amethyst-infused cuticle oil,” Hanna says. “People tell me all the time how it has completely changed the health of their cuticles almost immediately.”

Antioxidant vitamins A, C, and E work together to heal damage and promote strength.

Acetone is a weak nail’s worst enemy. Opt for this protein-building nail polish remover from Tenoverten instead. Bonus: It smells incredible.

I swear by this stuff to make my bumpy, uneven nails look normal again.

“My absolute favorite product for repairing damaged nails is the Zoya Naked Manicure system,” Hanna tells TZR. “It was specially formulated with various vitamins, minerals, and botanical extracts to nurse your nails back to health, all while making them appear healthy throughout the process. I just started using in myself and in just a couple of days I've already seen amazing results.”

Rose and jojoba oils make up the base this cuticle-soother from Tenoverten. The essential fatty acids inside strengthen and condition cuticles, while horsetail leaf extract promotes growth.

Apply this to bare nails before attempting a minimal mani to ensure the smoothest surface possible.

Biotin is famous for boosting the growth of hair, skin, and nails from the inside out, so I pop one of HUM Nutrition’s biotin-heavy Killer Nails pills every morning.

Once your natural-looking mani has dried, coat your nails with Barielle’s creamy moisturizer. It features soy protein to smooth and promote new growth.

Essie’s genius formula is a collagen-infused strengthening treatment *and* a sheer swipe of color in one.

This article was originally published on 3.12.2019