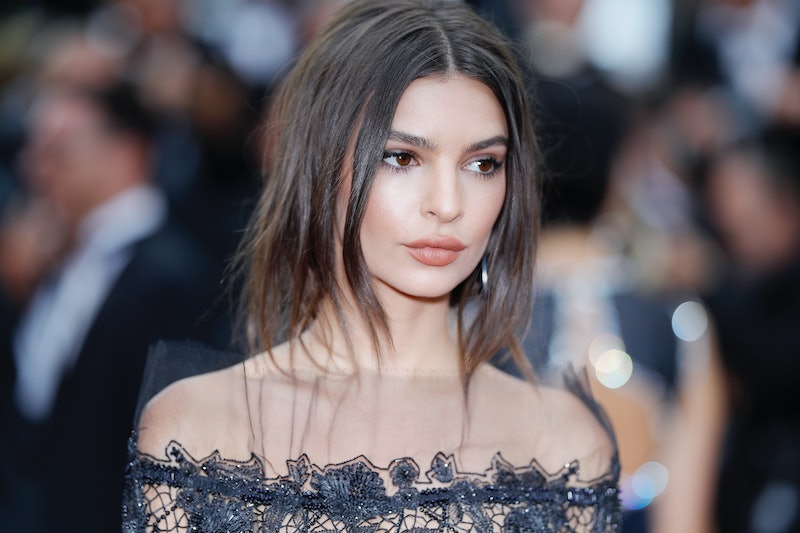 While it's impossible not to scoop up an affordable, celebrity-approved find the minute it makes its debut on said starlet, sometimes the best prices come to those who can wait. Case in point: Reformation's end-of-the-year sale has finally landed, and it's chock-full of so many amazing staples, including a handful of pieces Emily Ratajkowski has played favorites with over the past few months. If you've spotted the model in something from the L.A.-based label in recent months, it's likely you can now score it at 50 percent off. How's that for a shopping win?

Though the eco-friendly brand's epic, year-end markdowns officially hit the site on Dec. 13, the price drops keep getting better and better. The sale started by offering up to 40 percent off select pieces, and now, it's gone up to half-off the retail price. With prices as good as these, it should come as no surprise that everything is selling out — and fast. And considering the fact that Reformation sales are, well, rare, this is one shopping event you definitely don't want to sleep on.

Sifting through the bountiful selection of markdowns, however, can get overwhelming, so the first thing you should do prior to checking out the site is to figure out what parts of your wardrobe are in need of a little TLC. Maybe your denim collection is looking a bit bland? You're in luck, because there are so many jeans on sale right now, including a pair of striped, cropped flares EmRata debuted this past summer.

Other great Ratajkowski-approved finds include a fitted cropped top with statement-making puff sleeves and a mini slip dress that's bound to become your new go-to — and just in time for the holiday season, too.

Ahead, The Zoe Report's selection of EmRata-inspired pieces to score from Reformation's end-of-the-year sale. But you better act fast — the markdowns are flying off the shelves, so you'll want to press "add to cart" sooner rather than later.

EmRata loves these jeans, and you will, too. They are originally priced at $128, but thanks to the epic end-of-the-year sale, you can now score them for just $96.

Though Ratajkowski originally sported the floral-print version of this mini slip dress, the green hue feels more appropriate for the holiday season. Style it with sparkly, fishnet tights and black kitten heels for an edgy party look sure to wow.

This linen jumpsuit makes for the easiest outfit around. If you're going on a warm-weather vacation in the next few weeks, this is one EmRata-approved staple you'll certainly want to bring along.

This off-the-shoulder crop top would seamlessly fit into Ratajkowski's wardrobe — wouldn't you agree? Style it as she would with high-waisted jeans, black ankle booties, and her signature sunglasses.

EmRata was first spotted in these Reformation jeans back in Oct. 2017, and though her exact style is not on sale (she opted for the black-and-white version), the red, white, and blue striped pants are just as stylish.

The model is no stranger to a dramatic slit moment, and that's why it wouldn't be a surprise if she made an appearance in this black, long-sleeve dress in the coming months.

Corset-style tops have been gaining serious ground, and EmRata is one street-style star who is fully on board with it. Though she didn't wear this exact pick, she's rocked the lace-up trend in a handful of other ways. Who knows — maybe this top will make it into her wardrobe, too.

Score this stunning velvet slip dress at 50 percent off right now. It's the perfect wardrobe staple you can wear season after season, whether with a chunky knit in the wintertime or a lighter jacket come spring.

There's no better time than now to score this perfect wardrobe basic that you can style in countless different ways. Make like EmRata and wear it with high-waisted jeans and chunky sneakers. Or, pair it with an easy, breezy skirt once summer rolls around.