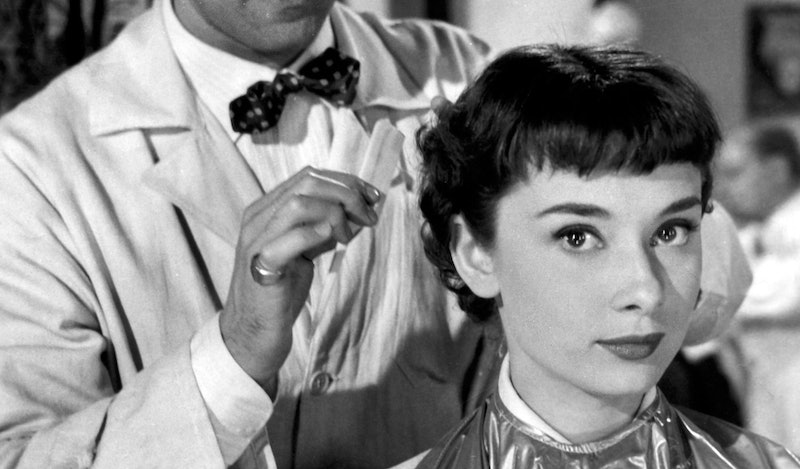 There's a certain amount of mystery surrounding the pixie cut. This enigmatic air isn't strictly regulated to how a person looks with one, either — the name of the hairstyle itself is a question mark. "My best guess would be that it’s because it’s short, cute, and elfin, like a fairytale pixie," says Rachael Gibson, hair editor and the creative behind @TheHairHistorian, an Instagram account dedicated to art and hair history. "I’ve never actually seen this defined with an ‘official’ answer."

On the other hand, what constitutes as a pixie cut is crystal clear: "A pixie cut is a really short, layered cut with the length [or] layers generally worn on top for texture [or] movement, and often a short, choppy fringe," Gibson explains. This is different from a bob (think flapper girl) and a pageboy. "A pageboy is quite long hair, generally with a full fringe — a bowl cut, almost!" she adds.

However, there isn't any firm account detailing the very first woman to ever crop her long and traditionally feminine hair, though interpretations of heroines like Joan of Arc or Hua Mulan certainly serve as cultural touchstones.

"One of the very few early examples of women wearing short hair was the Titus cut, which was popular in France in the early 1800s and which see women wear their hair very closely cropped," says Gibson. "It was a high-fashion look, not widespread, and caused total horror all round (not least because it was allegedly inspired by the way hair was cut ahead of someone being put in a guillotine)."

Fortunately, the record only becomes clearer after that. Ahead, a short history of the pixie cut — pun intended, of course.

Gibson notes that short hair on women in the United States first picked up steam in the 1910s and '20s. "The era saw more women than ever wearing short hair, but even the bob was considered scandalous for a long time," she explains. "Shorter hairstyles from the era of the bob, like the Eton crop or Shingle, were not particularly commonplace."

The Smithsonian magazine credited dancer Irene Castle for popularizing the "bobbed" style, noting that it was then called the Castle bob. In retrospect, it's easy to track the early rumblings of the modern pixie at the turn of the century — Josephine Baker's sleek Eton crop comes to mind — even if it seemed only like a variation on the bob at the time.

"For most of Western history, women were expected to have long hair once they reached adulthood. You’d wear it up once you reached marriageable age, and nobody except your husband or close friends [or] family would ever see you with your hair down again — but it was expected to be long and beautiful," says Gibson. "That’s why the bob, and later the pixie, were such radical cuts, because they totally confronted what Western society had come to accept as being how women should look."

Can one woman change the course of hair history? If there's ever a yes to that question, it's Audrey. "Audrey Hepburn is generally credited with popularizing the pixie cut, particularly in her 1953 movie, Roman Holiday. She actually gets her hair cut short in the film as part of the plot, in order to go incognito," says Gibson. "However, this haircut isn’t as short as what we generally think of as a pixie crop today (although the choppy bangs are very pixie-ish)."

Instead, Gibson suggests paying attention to Jean Seberg's hair in Bonjour Tristesse in 1958 and À bout de Souffle (Breathless) in 1960 — which, yes, both followed her film debut in Saint Joan. "It’s much shorter than Audrey’s hair just a few years earlier," notes Gibson. "I would say that slightly later, '60s stars like Twiggy and particularly Mia Farrow in Rosemary’s Baby (another in-film haircut!) really popularized what we would recognize as a pixie cut today."

Mirroring fashion, hair follows a trend cycle, and the pixie has been no exception to the rule. "After a '60s trend for short hair, the '70s and '80s definitely saw longer hair making a return, with flowing styles in the '70s progressing into the teased and over-the-top looks we think of with the '80s," explains Gibson.

Then came the '90s. Gibson points to Chloë Sevigny's "great, super-short, DIY pixie" in the 1995 movie Kids, as well as the hairstyles of Drew Barrymore, Toni Braxton, Jenny Shimizu, Halle Berry, and Winona Ryder. "I think, again, it’s just a contrast to what has gone before — so after the excesses of '80s glamour, what could be more dramatically different and fresh than a really short haircut that looks amazing without loads of product?" she says. "It very much speaks to that idea of understated '90s cool — Calvin Klein, minimal, effortless."

Now, 100 years after the Roaring '20s bobs made waves, you might not bat an eye if you see a woman with barely any hair walking down the street. Then again, some people might: Hair length for women continues to be a gendered topic often rooted in emotion, if the term "breakup haircut" serves as any indicator. "With no trichological costume to hide behind, femininity must be performed elsewhere — proactively and with excess: a ruffled shirt, a ring-laden hand, a rosy mouth," Alice Gregory wrote for T: The New York Times Style Magazine only five years ago. "Or, of course, not at all. Androgyny is its own kind of aphrodisiac."

"Notions of Western femininity are very much tied up with the idea of long hair, so cutting hair short is always going to feel political to some extent," Gibson notes. "A crop still has shock factor, and a celebrity can make the front page of a newspaper just for choosing to wear their hair short. The fact it still makes such a statement definitely gives it an appeal."