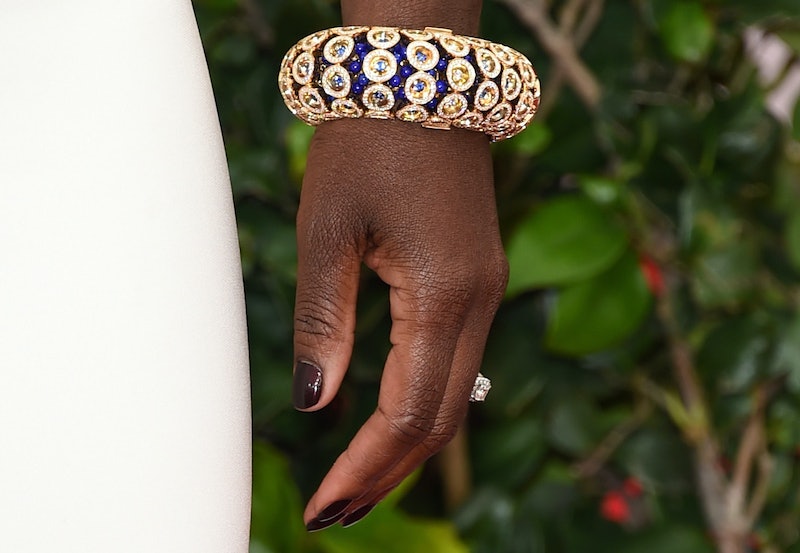 We've gotten to the point of winter where you've probably exhausted your go-to cold-weather nail color, which might mean it's time to turn to a barely there shade until your manicure appointment rolls around. But too often though, certain tans and browns don't swipe right — they're either too light or blend into your complexion too much. However, the best nude nail polishes for every skin tone aren't hard to find if you pay attention — and they're ready for their rightful time in the sun.

Still, picking out a nude polish is a totally different ballgame: You can't just go by the shade you see in a bottle sitting on the salon shelf. (Sometimes it's too sheer, or worse, too yellow.). Instead, try testing the polish with your undertone in mind to ensure that the nude will be visible once applied. If your complexion is fair, stick to sheer, opaque shades. Medium tones work well with taupe and salmon-based colors. Darker and deep skin tones soak up peachy and beige tones, so go for chocolate nudes with a hint of berry in them.

Or, if you don't feel like swatching, some of the industry's top manicurists revealed the best neutral polishes in their kits: Miss Pop, a New York City-based nail artist who includes Ariana Grande, and Janelle Monae as clients; Betina R. Goldstein whose clients are Zoe Kravitz, Rebel Wilson, and Dakota Johnson; Maki Sakamoto a manicurist who creates nails for Bella Hadid, Jessica Alba, and Rita Ora; and Casey Herman also a New York City-based manicurist that works with Scarlett Johansson, Paris Jackson, and Rachel McAdams. See their nudes below.

Favorited by Miss Pop for fairer skin tones, this lacquer is a mix between rose and a dusty pink which makes this color a little bit peachy.

The glossiness of this polish helps to enhance a nude color, which helps if your skin is lighter. Herman recommends this pale pink shade that is barely there, but still noticeable once it is applied to your nails.

Baby Love, a sheer and shiny shade, is among Miss Pop's list of favorites for those with fair complexions.

Equipped with a gel-like effect for nails, this pale pink shade truly lives up to its name.

With Organdi, your fingertips get health benefits *and* a blast of vibrant color. The formula contains ceramides, which help strengthen nails.

This creamy nude is reminiscent of a latte: full-bodied and full of energy.

Samoan Sand is precisely what you are picturing — a sandy color with a hint of pink. The shade is on the peachy side but still light.

This polish is a full treatment for your nails. It moisturizes, protects, and provides color all in a few swipes. The tea tree oil rejuvenates brittle nails, and the keratin helps to build stronger nails. Herman recommends this color for those with a darker skin tone, for its rich neutral base color.

This color reads as a sheer nude according to Goldstein. "Other sheer nudes have pink or white undertones that don’t match well for darker skin tones. This color balances the nail bed color to the skin color still maintaining a sheer clean look," she says.

"I love using this color on darker skin tones because it pops, but still looks chic," Goldstein says.

"The perfect balance of deep beige and rich caramel. It's one of my all-time favorite polishes," Goldstein says.

OPI
Nail Lacquer in Squeaker Of The House
$10.50

According to OPI's site, this shade is "a chocolate brown nail lacquer so yummy, it crosses party lines," and is another favorite from Sakamoto.